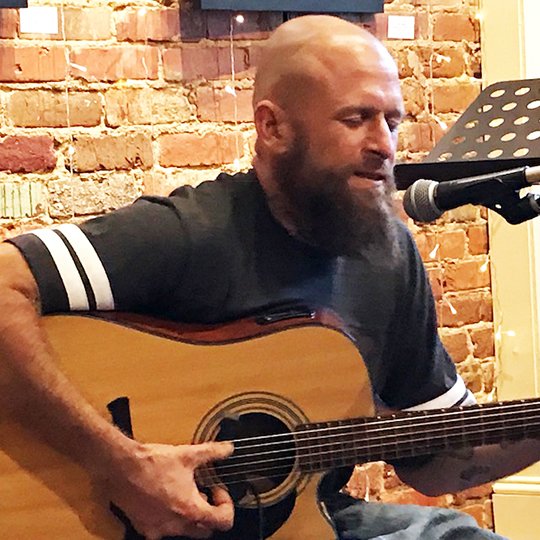 Submitted photo OPEN MIC: Mount Ida singer/songwriter Daniel Vanderford will be this week's feature for Wednesday Night poetry at Kollective Coffee+Tea, 110 Central Ave. The regular open mic for all poets begins at 6:30 p.m. and Vanderford will perform at 7 p.m., followed by another round of open mic. Admission is free and open to all ages.

The regular open mic for all poets begins at 6:30 p.m. and Vanderford will perform at 7 p.m., followed by another round of open mic. Admission is free and open to all ages.

Although he was born in southern California, Vanderford considers himself a native of Mount Ida. "My great-grandfather was one of the first homesteaders in Mount Ida, and my roots there go very deep," he said in a news release. "I've spent my last 38 years either leaving it or coming back ... my father is a drifter."

Vanderford credits Bob Dylan as the initial inspiration for him to become a singer-songwriter. "I was 14 when I heard Bob Dylan sing 'Only A Pawn In Their Game.' The way the lyrics and guitar moved me was the most powerful thing I ever felt. My mom had an old acoustic, and we got some strings for it. I've been singing and writing ever since."

Vanderford's songs have the earthiness of Dylan's early works that he melds with soft-spoken rap, the release said. The host of WNP, Bud Kenny, said, "Daniel is one of the most wonderful, heart-rending singer/songwriters I have ever experienced, and over the past 30 years I've experienced a bunch of them. This guy will move you."

When asked what inspires him to write, Vanderford said, "Writing and singing is how I cope with the injustices that I witness. I'm compelled to tell how I feel about it in song."

Over the years he has played in various venues across the country from the Sunset Strip to the Bronx. "From open mics to bars and places in between I tried to get my songs out there," he added.

A welder by trade, Vanderford said, "I put the guitar down and the dream aside for almost 10 years. I got married and I honestly tried to live like regular folks. I couldn't do it. So for the past year, I've been couch-hopping, writing and resurrecting old songs."