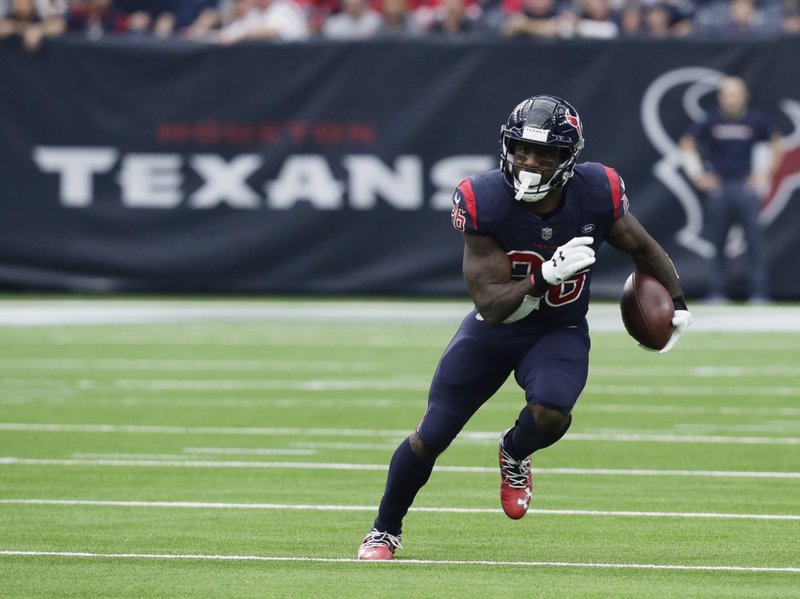 The Associated Press LEAN CUT: Texans running back Lamar Miller (26) runs the ball Sunday during the first half of a 29-13 win against the Cleveland Browns in Houston.

HOUSTON -- Lamar Miller was searching for ways to improve this offseason after what he calls a disappointing 2017.

It was then that the Houston Texans running back decided to take the advice of two former Miami Hurricanes running backs with a combined 25 years of NFL experience.

Edgerrin James, a four-time Pro Bowler who spent 11 years in the NFL, and Frank Gore, a 35-year-old who made the Pro Bowl five times and is in his 14th season shared their secret for NFL longevity: weight loss.

"They were just telling me that every year they tried to play lighter and lighter because as you get older they say you lose a step ... and all that weight is not good," Miller said.

"So just having guys like that to give you some knowledge on some of the things that helped them throughout their career, I just felt like it would help me. So that's something I tried to focus on this offseason was to lose some weight."

Gore called Miller his "little brother" and said he's a big believer in running backs getting lighter as they age.

Though he didn't make the change until this season, his transformation was about three years in the making.

Gore, who Miller has long looked to for advice, first brought up that he started playing a bit lighter every year as he aged before Miller's first season in Houston in 2016. But Miller was just 25 at the time and thought he was too young to worry about something that helped older players.

So, he went the other way and gained a few pounds before that season because he thought it would help him carry a bigger rushing load.

He had a good year, rushing for 1,073 yards with five touchdowns, before a 2017 season where he finished with 888 yards rushing and never ran for more than 75 yards in a game all season.

And when he spoke with James this offseason and he shared the same thing as Gore and suggested Miller should slim down, too, he decided to give it a try.

"I thought: 'They had success doing it so why can't you,'" Miller said.

It's a change he believes has made a big difference.

"I can feel it," he said. "I feel lighter when I'm running and stuff and overall my body feels good. I think it's helped me. So far, I've been doing good. I don't really see how it hasn't (helped)."

The numbers back it up. Miller had 103 yards rushing last week for his fourth 100-yard game this season, and with five regular-season games left he needs just 13 yards to eclipse last year's rushing total.

Coach Bill O'Brien has been impressed with Miller's improvement this season.

"He really wanted to come in this year and have a good year for us and that's what he's done," O'Brien said. "I think we've managed him pretty well and he's done a great job of, in the offseason, training and then having a good training camp. He's always been a consistent performer for us."

The thing that disappointed Miller most about his numbers last year was that he averaged a career-low 3.7 yards a carry.

"That was bad," he said. "My whole career I was averaging 4 yards or better, so that was a big drop-off for me."

This season he's boosted his average to 5 yards a carry, which is second only to the 5.1 yards he averaged in 2014 when he ran for a career-best 1,099 yards in Miami. Miller ranks sixth in the NFL in yards rushing and has the longest TD run in the league this season after he rumbled 97 yards for a score in Houston's win over Tennessee on Nov. 26.

That run made him the only player in NFL history to have two TD runs of 95 yards or longer after he also had a 97-yard touchdown run in 2014 while with the Dolphins.

Houston defensive end Jadeveon Clowney said that Miller looked like a rookie on that run and Miller, who was a sprinter on Miami's track team along with playing football, said he heard similar things from many old friends after that touchdown.

"People were saying: "oh you still have your speed and stuff,'" Miller said. "So just hearing it from a lot of people that I grew up with was good."

Gore was among those who delighted in seeing Miller break that long run and he raved about his work this season.

"He's balling," Gore said. "He's taking advantage of his opportunity. I hope he gets in the Pro Bowl."

Miller knows the solid play of Houston's offensive line and his focus on being more decisive have also contributed to his success this season. But he's sure the weight loss gave him a boost and that's why he's going to follow in the footsteps of his fellow former Hurricane friends for the rest of his career.

"I'm back in a rhythm," he said. "I'm doing some positive things to help this team win and that's always a good thing. So, I'm going to keep that formula to try to keep losing weight as I get older."