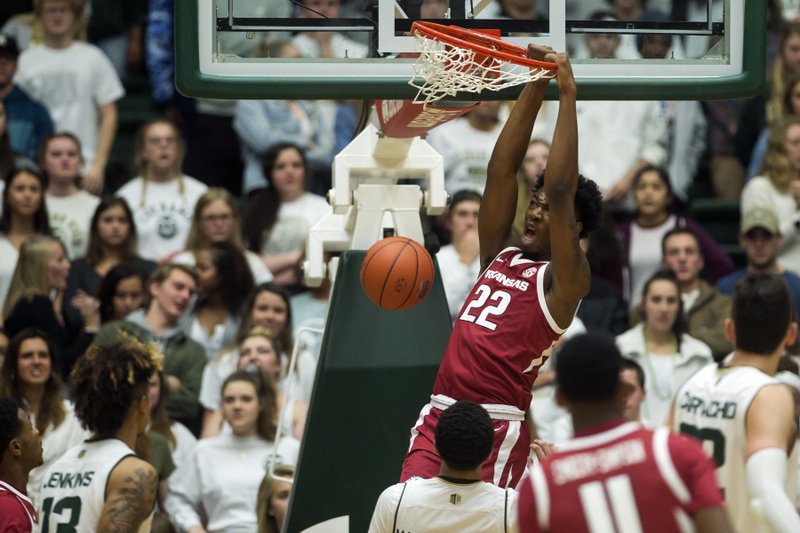 Arkansas had an answer for everything Colorado State could muster on Wednesday and the Razorbacks put the Rams away in the second half with one last run to earn a 98-74 in the first true road game for coach Mike Anderson's young team.

The Hogs (6-1) have not lost since the season opener against Texas (5-3) in overtime. Star sophomore center Daniel Gafford missed a free throw late in regulation and the Longhorns hit a late 3-pointer to send the game into overtime, where Texas took control and the win.

Wednesday's game in Fort Collins, Colo., was the first game away from Fayetteville for Arkansas since the Nov. 9 loss in El Paso, Texas, and the first away game at the opponent's venue. The home crowd at Moby Arena helped rally the Rams (4-5) to a series of runs that kept the game competitive for the first 28 minutes of game time.

Colorado State's last push saw the Rams go on a 13-0 run in less than two minutes. Arkansas sophomore point guard Jalen Harris slowed the run with a short jump shot on the other end, but two more Colorado State baskets made the score just 67-60 as Anderson called a timeout with 12:15 left on the clock.

"We knew coming in it was our first true road game, so we had to respond and show people what we're really made of," Harris said on Arkansas' postgame radio show.

Arkansas had taken its largest lead of the game at 65-43 at the 14:51 mark with a 24-10 run out of halftime. Freshman guard Isaiah Joe hit back-to-back 3-pointers to start the second half and Gafford got going on offense after sitting the final 8:07 of the first half with two fouls.

The pace of the game allowed Colorado State to slice through the lead in less than two minutes, but it also allowed Arkansas to put the game away in yet another swing of momentum. The Razorbacks turned up the pressure on both ends to go on a 13-0 run over the next four minutes for an 80-60 lead.

Sophomore guard Mason Jones' layup with 8:13 put the margin back at 20 points. The Rams were never able to get back within 16 points.

The two teams combined to turn the ball over 15 times and shoot 25-for-51, 49 percent, from 3-point. Arkansas scrapped to create a number of second-chance scoring opportunities, grabbing 15 offensive rebounds and outrebounding the Rams, 46-32, overall.

"When you're on that road, man, you've got to be able to shoot the basketball," Anderson said. "What a tremendous effort by our team. I thought our energy was really good."

Arkansas controlled the game from start to finish despite Colorado State's repeated pushes. A 3-pointer by Jones gave Arkansas a 12-2 lead in the opening 3:15.

The Razorbacks twice led by 17 points after Gafford was sent to the bench with his second foul. They were able to maintain the lead with scoring production off of the bench from the likes of freshman guard Keyshawn Embery-Simpson, freshman forward Reggie Chaney sophomore forward Gabe Osabuohien.

The Rams cut the margin to 41-33 in the final minute before Embery-Simpson hit a 3-pointer to set the halftime score. Junior forward Adrio Bailey each made blocks in the final five seconds of the first half to secure the lead.

Embery-Simpson and Chaney were among four Arkansas players in double digits. Embery-Simpson finished with 14 points in 16 minutes on 5-for-6 shooting, including 4 of 5 on 3-pointers. Chaney scored 11 points and was second on the team with eight rebounds.

"That's the best our bench has played, and it's good to see, especially on the road in a different environment," Anderson said. "I just know the potential's there.

"They've just got to continue to have confidence and faith in what they're doing and believe in themselves. I'm trusting them to put them out there, so they've got to trust themselves to go out there and lay it on the line."

Jones was tied for the leading scorer in the game with 16 points in 29 minutes on 5-for-10 shooting, including 4 of 8 from distance. Joe scored 14 points, also hitting four 3-pointers on nine attempts.

Harris continued to drive the offense with eight points, four steals and a game-high 12 assists. He made two highlight plays early in the second half, making a steal and a behind the back pass to Bailey on one possession before streaking down the lane for a one-handed slam about a minute later.

Up next for Arkansas is another test at home on Saturday against Western Kentucky (4-4), from Conference USA. The Razorbacks will host another CUSA team, UT-San Antonio (2-6), on Dec. 15 at Verizon Arena in North Little Rock.

They will play another three games in Fayetteville before the start of conference play. Their next road game will be their Southeastern Conference opener on Jan. 5 against Texas A&M (3-4).