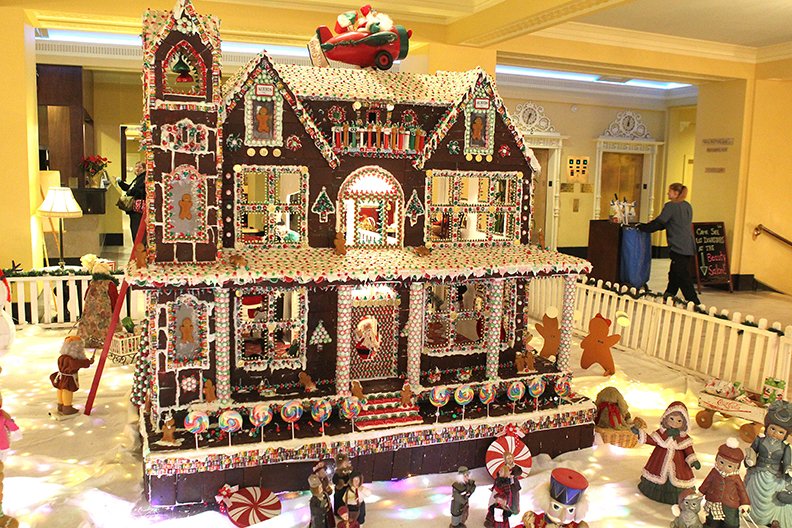 For over 30 years, the Arlington Resort Hotel & Spa has outdone itself with an even bigger and better gingerbread house than the year before and this year is no exception.

The confectionery creation stands at over 8 feet tall with distinctly Victorian stylistic details. Comprised of approximately 380 pounds of gingerbread, 350 pounds of candy, and 250 pounds of frosting, the behemoth gingerbread house weighs in at a grand total of nearly 1,000 pounds.

The process of baking, assembling, and decorating this iconic Hot Springs holiday staple took the hotel chef, staff, and other volunteers approximately two and a half weeks, Gaye Hardin, an Arlington spokeswoman, said.

All of the gingerbread used in the house is made on site, right in the Arlington Hotel kitchen. To bring this masterpiece to life, two different kinds of frosting are used, she said.

A thick, pasty icing acts as a glue of sorts, which is used to assemble the house and keep its components joined firmly together. Another, creamier, lighter frosting is the main element used for decorations and designs on the exterior of the sweet house, Hardin said.

The design is highly detailed and intricate, even featuring a chimney and a front porch with pillars. A white picket fence surrounds the sugary concoction, along with toys, dolls and fake snow.

Along with the gingerbread house itself, there is always a contest that accompanies it, Hardin said, noting that whoever makes the closest guess as to how many pieces of candy were used to make the house will win a special prize.

This year, the first place prize is a free brunch for four in the hotel's acclaimed restaurant, she said.

The contest's runner up will receive an Arlington Hotel t-shirt. The hotel consistently receives thousands of submissions in the box next to the display each year.

The gingerbread house is also a popular place to use as a backdrop for family Christmas photos and to capture the cheery holiday aesthetic for posting on social media. The gingerbread house will be on display to the public free of charge in the hotel's lobby until New Year's Day.