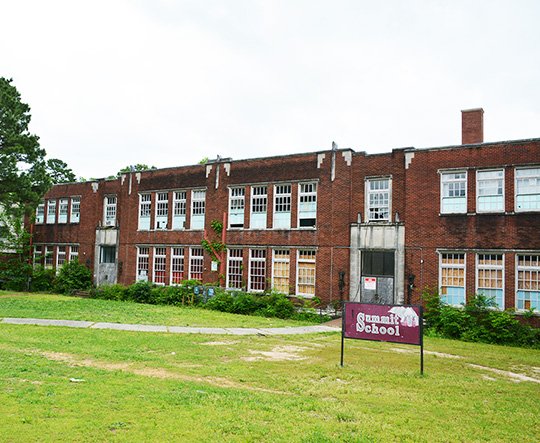 Greenwood School is among 10 Arkansas properties that have been added to the National Register of Historic Places, the country's official list of historically significant properties, the Arkansas Historic Preservation Program announced Thursday.

Greenwood School, 1425 Greenwood Ave., is a 1930 Art Deco-style building with a 1950 International-style addition, all designed by architect Irven D. McDaniel, AHPP said in a news release.

"In 1950, Greenwood School was expanded through the addition of four classrooms, two at each end of the original school building in a newly constructed upper level atop the existing eastern and western bays, designed to match the Art Deco style of the original building," according to the National Register nomination. "Also, a new International Style combination gymnasium-auditorium-cafeteria was added to the eastern side of the original building. This new multiuse space allowed the original central auditorium space to be subdivided into additional classrooms. The additions, including the multiuse addition were all designed by the school's original architect, Irven D. McDaniel."

Greenwood School was among 14 properties officially nominated for the National Register of Historic Places by the State Review Board of the Arkansas Historic Preservation Program during its meeting in December.

The Greenwood School was built in 1930 at the intersection of Greenwood Avenue and Richardson Street.

"It is important to note that the Greenwood School building was constructed during the period of racial segregation of schools in most of the southern United States," according to the National Register nomination.

"Greenwood School was a white student-only school until the local school district was integrated after the Supreme Court decision against segregation of schools in Brown vs. Board of Education of Topeka, Kansas, in 1954," it said.

"The desegregation of the schools in Hot Springs was a relatively quiet transition, with very little discord in the city over the issue," according to the nomination. "By the mid-1950s, the local school district was integrated."

The school district began an integrated off-site automotive class in the mid-1950s to meet the minimum requirements. "Token compliance" to the new requirements began in 1963 when eight black children were admitted into white elementary schools.