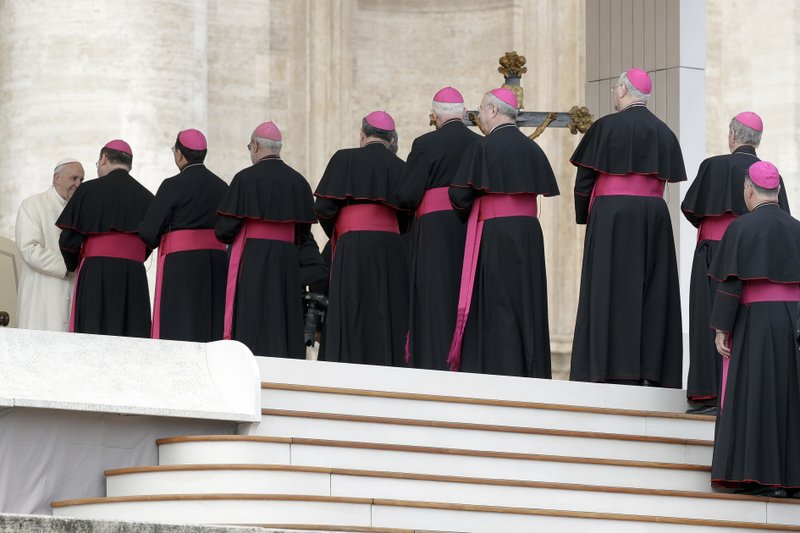 VATICAN CITY -- Just how well informed is Pope Francis about the goings-on in his 1.2-billion strong Catholic Church?

That question is making the rounds after the pope seemed completely unaware of the details of a Chilean sex abuse scandal, a failure that soured his recent trip there and forced him to do an about-face. It also came up after his abrupt, no-explanation-given dismissal of a respected Vatican bank manager.

And it rose to the fore when he was accused by a cardinal of not realizing that his own diplomats were "selling out" the underground Catholic Church in China for the sake of political expediency.

Some Vatican observers now wonder whether Francis is getting enough of the high-quality briefings befitting a world leader, or whether he is relying more on instinct and his own network of informants who slip him information on the side.

In his five years as pope, Francis has created an informal, parallel information structure that often rubs up against official Vatican channels. That includes a papal kitchen cabinet of nine cardinal advisers who meet every three months at the Vatican and have the pope's ear, plus the regular briefings he receives from the top Vatican brass.

The Vatican this week issued a remarkable defense of Francis' information flow and his grasp of the delicate China dossier. The Holy See press office insisted that Francis followed the China negotiations closely, was being "faithfully" briefed by his advisers and was in complete agreement with his secretary of state on the topic.

"It is therefore surprising and regrettable that the contrary is affirmed by people in the church, thus fostering confusion and controversy," said Vatican spokesman Greg Burke.

Such an affirmation would seem unnecessary given popes usually are surrounded only by their top official advisers. But Francis lives at the Vatican's Santa Marta hotel rather than the Apostolic Palace, where he can more easily keep his door open at all hours, and where a network of friends, informants and advisers provide back channels of information to him.

"The problem is he's the victim of the Santa Marta syndrome," said Massimo Franco, columnist for the Italian daily Corriere della Sera. "The pope wanted to live there because he didn't want any filter from the secretary of state. But the other side of the coin is that he's condemned to receive quite casual information, and not always very accurate."

At Santa Marta, the pope sets his own agenda, makes his own phone calls and arranges his own visitors' schedule, often without the knowledge of the Vatican's protocol office. He neither watches TV nor browses the Internet but reads the Rome daily Il Messaggero and a selection of press clippings for his non-Vatican news.

Some of his information arrives in person, some of it on paper, left for him in a red leather-bound folder left at the Santa Marta front desk and brought upstairs by a Swiss Guard and handed over to one of the pope's two private secretaries.

Francis has two main gatekeepers, Monsignor Yoannis Lahzi Gaid, an Egyptian Copt who used to work in the Vatican's secretariat of state, and Monsignor Fabian Pedacchio, an Argentine priest who Francis, when he was archbishop of Buenos Aires, dispatched to Rome in 2007.

He also has the prefect of the papal household, Monsignor Georg Gaenswein, who arranges official audiences and decides who gets to greet the pope at the end of his weekly Wednesday general audience.

Sometimes popes suffer when their gatekeepers fail them: Pope Benedict XVI famously lifted the excommunication of a Holocaust-denying bishop, unaware that a simple Google search would have turned up the bishop's belief that the Nazi gas chambers were a myth.

But more than his immediate predecessor Benedict, Francis still relies on a close circle of friends from his days in Argentina and as a high-ranking Jesuit to give him the pulse of what's going on back home, in the Vatican and elsewhere in the church.

And he can be fiercely stubborn once he has made up his mind based on information that does reach him, such as his recent dismissal of the respected No. 2 at the Vatican bank, Giulio Mattietti, who was fired without explanation at the end of the year.

In his subsequent Christmas address to the Vatican bureaucracy, Francis blasted Vatican staff who have been sidelined, saying "they wrongly declare themselves martyrs of the system, of a 'pope kept in the dark.'"

But with Chile's priest sex abuse scandal, Francis was forced to admit he had not only made a mistake, but maybe was in the dark.

The Vatican announced Tuesday that Francis was sending the Vatican's top sex crimes investigator to Chile to look into a bishop accused of covering up for the country's most notorious pedophile priest. Francis had staunchly defended the bishop, Juan Barros, while in Chile and his about-face came only after "recent information" had reached the Vatican, Burke said.

Francis seemed completely unaware that Chilean abuse victims of the Rev. Fernando Karadima had for years said Barros knew of Karadima's perversions, had even witnessed them, and done nothing. One survivor, Juan Carlos Cruz, even testified to Chilean prosecutors about it.

But apparently that information never reached the pope -- and led to one of the greatest gaffes of his five-year papacy. He demanded "proof" that Barros was guilty of covering up for Karadima's crimes and said that without that, such accusations were mere "calumny."

Francis later issued a partial apology. But even as he flew back to Rome on Jan. 21, Francis was saying he was convinced that Barros was innocent, though he said he was open to hearing from anyone with information on it.

In such a case, the pope would have been receiving information from his ambassador in Chile, who like other Vatican envoys writes daily encrypted briefs to the Vatican secretariat of state that the pope reads each morning. He also hears from the local church hierarchy, who visited him en masse in February 2017.

Francis also has in Chile one of his nine cardinal advisers, Cardinal Francisco Errazuriz, the retired archbishop of Santiago. Errazuriz has testified that he didn't believe Karadima's victims and shelved the investigation until he was forced to reopen it after they went public with their claims.

At any stage, then, anyone who didn't believe the victims or wanted to protect Barros might have filtered out the victims' testimony or cast doubt on it -- before it ever got to the pope.