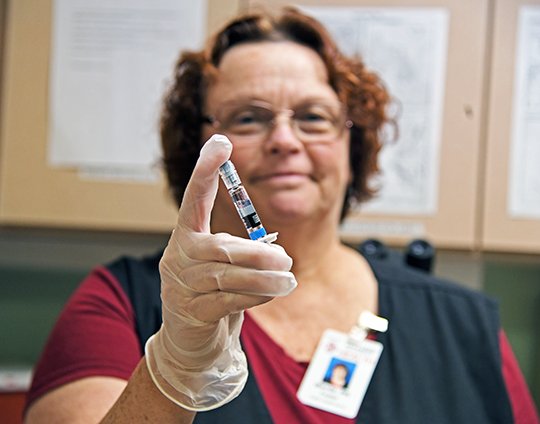 The Arkansas Department of Health announced Thursday that it is offering free flu shots at all Local Health Units in the state, with no out-of-pocket cost for patients, regardless of their insurance status.

The state continues to see a high number of flu cases and flu-related deaths this season, ADH said in a news release. The ADH reported on Jan. 31 that there had been 94 flu-related deaths in the state. As of Thursday, that number had risen to 125. Three of those deaths were children.

Although the state is now officially offering free flu shots, Garland County Health Unit Administrator Chris Rowland said no one in need in Garland County has ever been turned away, regardless of their financial situation or insurance status.

"We were actually charging insurance before and we were doing a low-cost shot if you couldn't afford that, but if somebody came up to us and couldn't afford that, we would still give them a free shot. We're not going to turn anybody away on a shot if they can't pay, and we never have done that, so it's not really a big change on us; we would have done it before if people had a need and they couldn't pay," he said.

Rowland added that "we're definitely not through the flu season yet -- we still have some more to come," and he said the length of flu season varies from one year to another. Seasonal flu activity often begins as early as October or November and can continue to occur as late as May.

There is still time for those who have not yet received the flu shot to become vaccinated. Even in years where the flu shot is not perfect, it is still the best protection from the flu that is available, the release said. Other important ways to help prevent the spread of flu include frequent hand-washing, avoiding people who are sick, covering the nose and mouth while coughing, avoiding touching the face and eyes, and staying home when sick.

Arkansas was hit hard this season by the influenza virus, and Garland County has been listed among the highest-hit areas.

"At this point, our goal is just to encourage anybody to get a shot that hasn't gotten one yet," Rowland said.

Flu symptoms include fever, chills, cough, sore throat, muscle or body aches, fatigue and a headache. Symptoms may also include vomiting and diarrhea in children. Influenza antiviral prescription drugs, like Tamiflu, can be used to prevent or treat influenza if started soon after symptoms begin.

People who are at a higher risk for complications from the flu include:

• Pregnant women, or women up to two weeks after delivering a child.

• People with a suppressed immune system.

• Residents of nursing homes or other chronic care facilities.

It is recommended that everyone aged 6 months and older get the flu shot every year. It is especially important for pregnant women and others at high risk for complications. The flu shot is available in LHUs located in every county and many doctor's offices. Pharmacies also have flu shots available but do not give flu shots to children younger than 7 years of age, the release said.

Any Arkansan who has not yet received a flu shot can go to the LHU near them. The Garland County Health Unit is located at 1425 Malvern Ave. The hours are 8 a.m. to 4:30 p.m.

A complete list of LHUs in the state can be found online at http://www.healthy.arkansas.gov/health-units.

When visiting a LHU to be vaccinated, Rowland encourages individuals to bring with them a form of ID and insurance paperwork, if possible, but emphasizes, again, that no one will be turned away. He also advises those already displaying symptoms of the flu to wear a mask when in or around the general public.

"If they do come in and they're showing symptoms, they need to ask at the front desk and we'll give them a surgical-type mask that they can put on -- we're trying to keep from spreading it as much as we can," he said. "We've got signs up on the doors; if somebody comes in and they're having any kind of symptoms like that, please let the staff know and we can take care of them."