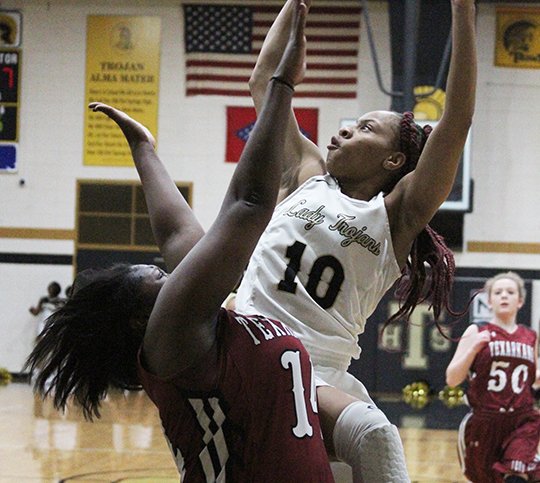 Much like they have throughout their careers, the backcourt duo of Ariana Guinn and Imani Honey put on a show for the Hot Springs Lady Trojans Friday night.

"We talked about it before the game, but on senior nights, you never know what you are going to get," Hot Springs coach Josh Smith said. "At the start of the game, I looked out there and both of them were red-faced with tears about to run down their face. Once they got past that first emotional run, they settled in and did what they do."

Despite fast starts from the Lady Trojan duo, Texarkana hung around and was within 18-10 at the end of the first quarter.

Consecutive 3-pointers from Texarkana's Tierra Holliman trimmed the gap to 22-17 early in the second period before Hot Springs settled in and took control.

Two free throws from Honey and a 3-pointer by sophomore guard Keindia Nevels sparked a 10-0 run as the Lady Trojans pushed their lead to 32-17.

"That run was huge," said Smith. "We knew (Holliman) could shoot it. She hit four (3-pointers) against us down at their place, and she made some really good moves tonight. When they did that, we had to hit them right back to get that momentum going and try to take some of that hope away."

After Guinn scored four points from the free throw line, Honey beat the buzzer from behind the arc to give the Lady Trojans a comfortable 41-22 halftime lead.

Hot Springs kept its foot on the gas to prevent any chance of a comeback in the second half. Guinn and Honey combined for 11 points and the Lady Trojans opened the third quarter on a 13-2 run to stretch the lead to 54-24.

After switching its defensive game plan, Hot Springs allowed just seven points in the third period. The Lady Trojans forced Texarkana into 21 turnovers in the game, including 10 steals.

"We tried to play them man-to-man in the first half, and they attacked us and caused us some issues," Smith said. "We got out of that and switched to a zone (defense) in the second half. I thought once we did that, we did a better job of containing them and getting in the passing lanes."

Leading 62-28 at the end of three quarters, Hot Springs closed the game in style. Guinn and Honey combined for eight points as part of a 10-0 run before leaving to a standing ovation.

Guinn led all scorers with 28 points and Honey finished with 26 points, both players connecting on two shots from behind the arc.

The Lady Trojans will take a 15-game winning streak into their regular season finale Friday at Lake Hamilton (14-11, 9-5).

"We've got a nice little week off now, and this can be a good thing for us," said Smith. "We've had some illness hit the team, so that gives us some time to get those girls back.

"We've got some time to focus on this last run that we need to make, and part of it is still trying to find that complete game. "We've just got to keep working and locking in on defense."