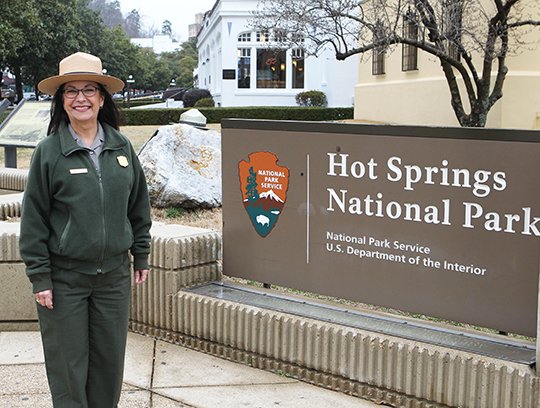 After a 25-year career with the National Park Service, 14 of those in Hot Springs, Josie Fernandez, superintendent of Hot Springs National Park, announced on Wednesday that she will retire at the end of March.

Parallel to her career with the Park Service, Fernandez held a second career as a lieutenant colonel in the U.S. Air Force Reserve until her retirement as a colonel in September 2016 after nearly 40 years of service.

"The 'r-word', the retirement word, has been in my head from at least 2016 because that was my first retirement," she said. "I've always heard people that are wiser than me say, 'You'll know it when it's time,' and all of a sudden it was time. I started in the Air Force on active duty, so two uniforms, two different careers -- there comes a point in your life where you realize that you've done all that you can and the energy of a new generation is needed to continue the job."

When Fernandez assumed the role of HSNP superintendent in 2004, she said one of her main goals was to rehabilitate the six empty bath houses in downtown Hot Springs and, more importantly, make them marketable to private sector partners who would invest in that vision. With only one of six of those bath houses still unoccupied, Fernandez said she is satisfied with what she's done.

"I am very satisfied and proud to have worked with a whole bunch of people who had a vision that they shared with me and that I shared with them, that this was worth our efforts and that we were going to focus on doing the right thing," she said. "I think we're well on our way. Not all of the bath houses are occupied -- only one of them is not leased -- but when I think of six empty buildings and now nearly all of them being open, I think that we've moved the goal post."

In her successor, Fernandez looks forward to seeing new energy, a new personality and a new pair of eyes.

"A new way of doing things is always refreshing, no matter where you are. I witnessed that many times in the military. In fact, military commanders are moved about every three or four years so that things don't become stale, so that's what I mean about new energy, new generation, new opportunities. I look forward to seeing what they do and only providing advice if advice is asked for," she said. "I leave Hot Springs National Park with no regrets but it's no longer my place to manage it, so I intend to fade away."

As of now it is unknown who her replacement will be.

After a series of stressful events in 2017, including suffering a broken leg, Fernandez looks forward to slowing down after her retirement and seizing the opportunity to do some traveling.

"It became very real to me that if I'm going to do all of the active things that I've always dreamt of doing, I need to be in good shape and I need to be young enough and ambulatory enough to do it," she said. "I'm going to be 62 in September so this is the time to do it."

She added that if she stumbles upon a challenge that calls for her passion and expertise, she certainly plans to jump to it, but right now she just wants to rest.

Fernandez plans to remain in Hot Springs after her retirement.

"We love it here, this is a good place to live and be from and I look forward to being involved inasmuch as I can the things that I'm passionate about. In the near term, I want to relax and do not much of anything," she said, laughing. "Maybe get in hot water for relaxation instead of anything else."