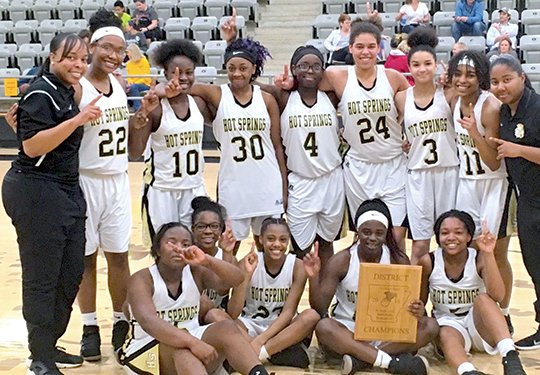 "This, of course, is a game that we have talked about and prepared for all season," said Hot Springs head coach Keysha Hill. "Lakeside is a very competitive team and on any given night can hurt you from outside the arc.

"So we were sure to harp on defense and getting stops and converting those stops to easy transition points. And that was exactly what we were able to do."

Hot Springs finished the regular season undefeated in conference play and received a first-round bye as the No. 1 seed in the district tournament.

The junior Lady Trojans steamed by Camden Fairview, 45-18, in the semifinals on Monday. The score was tied 8-8 in the first quarter, but Hot Springs went on runs of 14-6 in the second quarter and 14-4 in the third quarter before holding Fairview scoreless in the fourth quarter.

"I am extremely proud of these young ladies and what they were able to accomplish as a team," Hill said. "We have an awesome bunch of ninth-graders that will truly be missed and played a major role in our success."