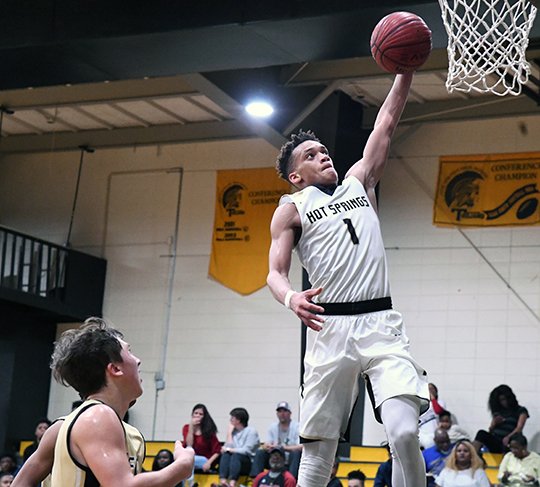 Hot Springs got off to a strong start and never relented as the Trojans rolled to an 84-48 victory over De Queen in the opening round of the 5A-South district tournament Monday at Trojan Fieldhouse.

The Trojans put up four quick points before the Leopards (2-24) managed to hit a 3-pointer to pull within one with 6:55 remaining in the opening quarter. Hot Springs then went on an 8-0 run to take a 12-3 lead at the 4:45 mark.

"We got off to a pretty good start," said Hot Springs head coach Rodney Echols. "We knocked down shots. We missed a ton of free throws, which can always come back to bite us.

"I thought we shot the ball fairly well. We scored quite a bit in transition, which helps us. It sets up our press quite a bit. We're pretty good on the defensive end. De Queen knocked down an enormous amount of threes. They did a good job of knocking down those shots."

Hot Springs jumped out in the second with an 8-0 run after the Leopards hit a trey just 27 seconds into the period to take a 31-16 lead. The two teams traded shots for much of the period before the Trojans hit an 8-2 run to stretch out to a 42-26 lead with 2:05 to go.

The hosts then held De Queen scoreless for the remainder of the half as they closed out with a 7-0 run to take a 49-26 lead into the locker room.

With a 30-plus point lead going into the final period, the Arkansas Activities Association's Mercy Rule went into effect, setting the clock into motion without stopping.

The Trojans continued to dominate, putting up nine points, while allowing six to secure the win.

Thomas picked up a double-double with 12 rebounds in addition to his 31 points, while grabbing four steals.

"We wanted to get the ball inside to him tonight and allow him to have some scoring opportunities," Echols said. "He answered that with a big exclamation point with 31 and 12.

"Mello, he played big," Echols said. "He got some key offensive rebounds for us. He started us on the break well. For guys that have 31 games under their belts, to step up during this time and give us the effort, we need that to continue to play at a high level."

The Trojans shot 43 percent from the field, but they struggled from distance, hitting just 2 of 11 for 18 percent. Hot Springs also won the turnover battle, stealing the ball 15 times, while turning the ball over just five times.