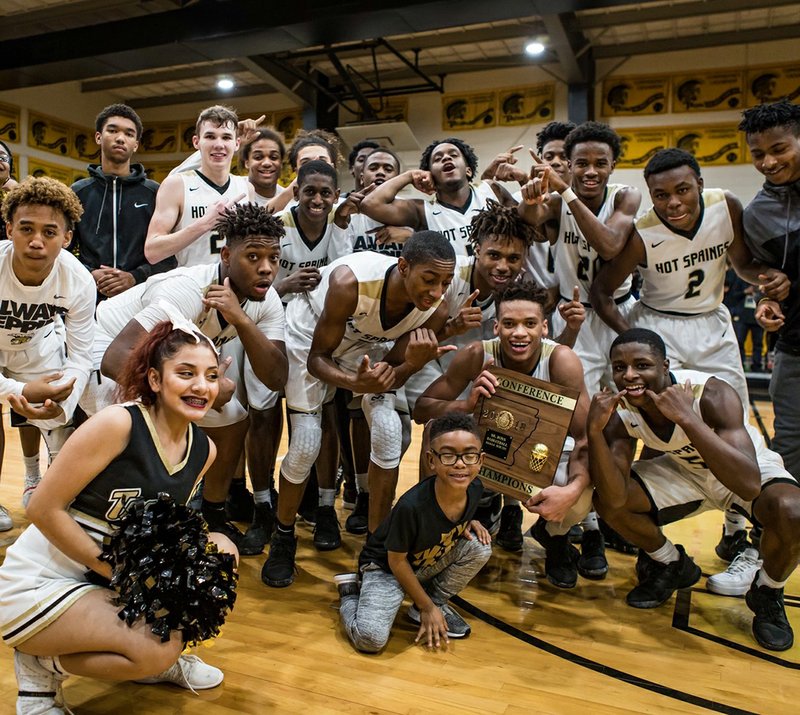 Underclassmen Kaleb Hughley, Santiair Thomas and J.J. Walker combined for 31 points as the Trojans (22-11) avenged a 49-41 loss on Jan. 26 at Magnolia (18-6) with a 43-31 win at Trojan Fieldhouse, claiming their fourth league title in the last five years.

"I attribute that to the non-conference schedule," Hot Springs coach Rodney Echols said. "We played in some big time tournaments. We traveled and played some top level competition all year long, and I watched these guys grow from little boys to young men.

"The maturity process was a long road. As we got along further into the season, I watched these kids just grow and get better as basketball players with their understanding of the game."

After a basket by Thomas, Hughley led the offensive attack in the second quarter with his outside shooting. The sophomore connected on three shots from behind the arc and the Trojans rode an 8-0 run to a 20-13 halftime advantage.

"We had looks and we told our kids to take those shots," said Echols. "With the 1-3-1 (defense) that Magnolia plays, it allows opportunities to knock down outside shots. When those are going in, we look pretty good."

Hot Springs struggled to maintain its offensive outburst in the third quarter, but the Trojans made up for it with their effort on the defensive end.

While Thomas led the way with five points, Hot Springs held the Panthers to just six points in the third period to take a comfortable 27-19 lead into the final quarter.

Scoring 31 points against De Queen and 26 points against Camden Fairview in the first two games of the conference tournament, Thomas shouldered the load for the Trojans down the stretch.

Held to two points in the first half, the sophomore scored six straight points to open the fourth quarter as Hot Springs stretched its lead to 33-23.

"I knew that if I would be aggressive, my team would start being aggressive with me," Thomas said. "We all rely on each other to pick it up whenever the team needs it."

Magnolia's Kadyn Roach scored six points in the final frame, but the Panthers were unable to trim the gap to less than seven points. After a layup by Roach, Hot Springs scored the game's last seven points, including a 3-pointer by Walker in the final minute to put the exclamation point on the win.

Thomas led all scorers with 14 points, including 12 in the second half, while also notching his third consecutive double-double with a team-high 11 rebounds.

"He's just that kid that you love to have in your program," said Echols. "We wanted him to be that leader for us this season, but we knew it was going to take time. Here over the last five games, especially in this tournament, he answered the call. He stepped up for us and he was our bellcow."

Having matched their win total from last season, the top-seeded Trojans will face the 5A-West No. 4 seed at 2:30 p.m. Tuesday in the first round of the Class 5A state tournament at Maumelle High School.

"We are going to do what we have been doing all year long," Echols said. "They said this was supposed to be a rebuilding year, but these guys beat the odds. We have created a culture of winning and in this culture, losing is not an option.

"Now it's a whole new season. We're 0-0 come Tuesday and these guys have to understand the importance of going in with the right state of mind. These guys know what we expect, and they have goals of their own."