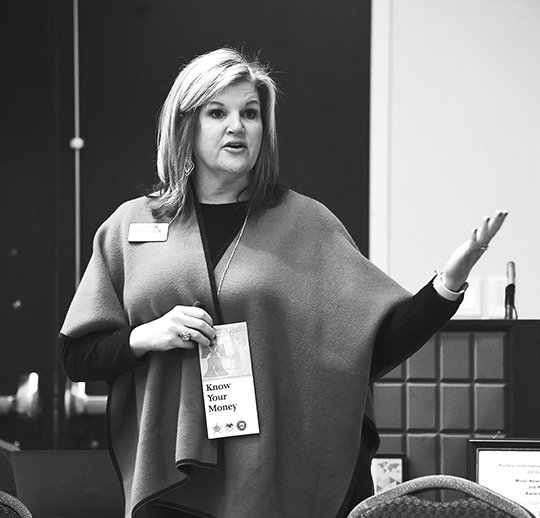 The Sentinel-Record/Grace Brown ROTARY: Leslie Rosales, a financial wellness relationship manager at Regions Bank, spoke to Oaklawn Rotary Club at its weekly meeting at The Hotel Hot Springs &amp; Spa on Monday about Counterfeit Money Awareness and Cash Handling Tips, one of 16 seminar topics included in the Regions At Work Financial Wellness program.

Oaklawn Rotary Club members got a lesson in counterfeit awareness on Monday.

Leslie Rosales, a financial wellness relationship manager at Regions Bank, spoke to Rotarians at their weekly meeting at The Hotel Hot Springs & Spa about Counterfeit Money Awareness and Cash Handling Tips, one of 16 seminar topics included in the Regions At Work Financial Wellness program.

"We have 16 different presentations that we can come out to your place of business and present to your employees. This one I'm very passionate about; we started this right before Black Friday. This is on counterfeit awareness, and I'm happy to say we've even gotten Secret Service involved, so that's kind of cool," Rosales said during her introduction.

She said the best way to prevent unintentionally using counterfeit money is to be educated on each denomination's security features and becoming familiar with the look and feel of currency.

Rosales recalled a time when she held both a counterfeit $100 bill and a real $100 bill in her hands for comparison, noting that although they felt slightly different, they were extremely similar in appearance. Upon flipping the counterfeit bill over, she said the words "For motion picture use only" were typed across the back of the bill.

"You can order 10,000 bills for $5 online. You can order that money anywhere. You can get stacks of bills that look real -- because, you know, in the movies they have the big briefcase with all that money, that's what that's for, and it has gotten very, very circulated," Rosales said.

The Regions at Work program is available for all places of business and is geared toward providing employees with benefits and services like financial advice, guidance, and education. Regions Bank sends knowledgeable representatives to places of business to facilitate financial seminars, explain program benefits, answer questions, and provides all the materials needed to promote and host the seminar event.

Born and raised in Arkadelphia, Rosales graduated from Henderson State University in 1991 with a bachelor of science in accounting. She began her accounting career in Mississippi but soon discovered her passion was sales and working with people. She then began work as a pharmaceutical sales representative before returning home to Arkansas where she began working at Regions Bank in Maumelle.

She said authentic U.S. currency is made up of one-quarter linen and three-quarters cotton.

"Believe it or not, the way they are doing this, the easiest, least complicated way, they are going to Walmart and buying an HP printer, scanning money over the top of a denomination already, and printing it out on just regular copy paper. And, having enough nerve after they do that for awhile, taking the printer back to Walmart and exchanging it. That's one of my Secret Service stories and those have been so much fun to listen to because you always see those stories on TV and you're like, 'What were they thinking?' They get caught and that's kind of like what these people are doing," Rosales said.

While there are seven denominations of currency in the United States, the most counterfeited denomination is the $20 bill.

"Each bill has unique security features -- the goal is to know which belong to what denomination. You've got to know that, your employees have got to know that, and that's why we are offering to teach it. We don't even teach our bankers or tellers that -- they get that just from on-the-job training," Rosales said. "We would like to come out and show them this, give them these cheat sheets, place them at their cashier desks."