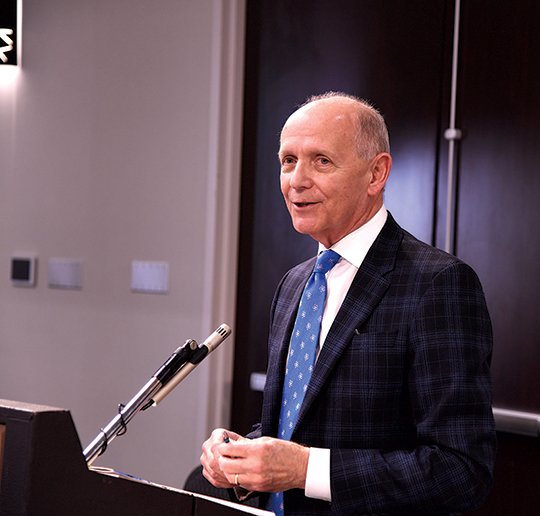 The Sentinel-Record/Grace Brown ROTARY: Jim Dailey, Arkansas tourism director for the Arkansas Department of Parks and Tourism, spoke to Oaklawn Rotary Club at its weekly meeting at The Hotel Hot Springs & Spa on Monday about the impact that tourism has on the state and his goals for helping to continue to draw in visitors.

The self-proclaimed "mayor of Arkansas" touted the importance of tourism in the state Monday in Hot Springs.

Jim Dailey, Arkansas tourism director for the Arkansas Department of Parks and Tourism, spoke to Oaklawn Rotary Club members about the impact tourism has on the state and his goals for helping to continue to draw in visitors during the club's weekly meeting at The Hotel Hot Springs & Spa.

A former Little Rock mayor, Dailey said he elected to assume the role of Arkansas tourism director in late 2017 after being requested by Gov. Asa Hutchinson. His appointment as tourism director came after the retirement of Joe David Rice, who spent 30 years in the role.

"When the governor came to me and said, 'Jim, would you be willing to do this tourism director position?' the first thing I said was, 'I'm too old,' because I'm actually older than Joe David Rice was and he retired," Dailey said, laughing. "I committed that I would do this at least for two, maybe three years, because we are in a transition and we've had a lot of leadership change. Probably the best thing I can do right now is be a part of helping us develop the next phases of leadership for our whole department of parks and tourism."

Dailey broke down the financial impact that tourism has on the state. He said Arkansas draws in close to 30 million visitors per year, $7.7 billion in economic travel expenditures, $145 million in local taxes, and $394 million in state taxes. Approximately $1.4 billion in wages are earned by individuals in 66,000 tourism-related jobs in the state.

He added that the budget for the tourism department 20-25 years ago was approximately $544,000, whereas now it is close to $20 million.

"The whole agency's budget is $150 million," he said. "That has given us the ability to be able to advertise and support this industry. Tourism is relevant not just to Hot Springs and Little Rock, but certainly we see it growing all over the state. It's relevant to all 75 counties."

Dailey said Garland County and the Diamond Lakes Region alone pulled in just under $1 billion in travel expenditures in 2016.

"Whether it's the lakes, the hotels, the casino, or whatever, it truly has had great impact. The world of resources that you have available to you because the citizens have allowed us to have the funding -- not only do you have the 52 state parks that were falling apart before the citizens came up with the money, but you now have 52 state parks that are recognized as some of the best parks in the nation and certainly the best park system in the nation," he added.

Dailey said advertising in Arkansas is "a wonderful resource," adding that the state has 14 welcome centers that represent the first point of contact for people that are traveling into and out of the state.

"Travelers today are getting more and more shrewd, and the hype is something that you might get their attention with but what they really want is that connection to what your state is all about, and the authenticity. So, in that sense, whether it's Jones Bar-B-Q or it's Johnny Cash's childhood home, which is becoming one of our biggest tourism attractions, what people are really interested in is connecting with that history, like Hot Springs, connecting to something that's unique," he said.

The initiation and launch of the new U.S. Civil Rights Trail across the southern portion of the United States is set to become another big tourist attraction in Arkansas, Dailey said, as six sites in Little Rock are included in the trail. Among those is Little Rock Central High School, which is recognized in a national survey as the sixth most identified tourist attraction in Arkansas, he added.

The completion of the Southwest Trail, a multipurpose trail in Arkansas that runs from the Arkansas River Trail to Hot Springs National Park along an abandoned railway, will also attract more visitors to the state.

Other areas of major importance in Arkansas tourism are both retirees and millennials and outdoor activities like mountain biking, hiking, and motorcycle riding.

"I'm an old salesman, I grew up in the world of sales, and I call myself, according to some people now, 'the mayor of Arkansas' because I'm trying to sell the state now and it's bigger than just selling Little Rock. I look at this as an opportunity to connect cities from all over the state," Dailey said of his role as tourism director. "What I have been focusing on is the belief that in each of the cities in the state -- we have 500 cities in this state -- I believe that each one of them has a story to tell.

"My thinking on this is, whether you're a city of a couple of hundred or maybe you're a city of a couple hundred thousand, there is something there that would cause someone to say, 'You know, I might just stop there.' Whether it's small cities and we connect them in a way to where it becomes part of a trail, or whether it's a trail of just unique things that would bring them to Arkansas or to spend a couple nights here rather than just pass through, that's a goal I have. This is one that I'm excited about because it gets right down into the trenches of the cities, small and large, across the state."