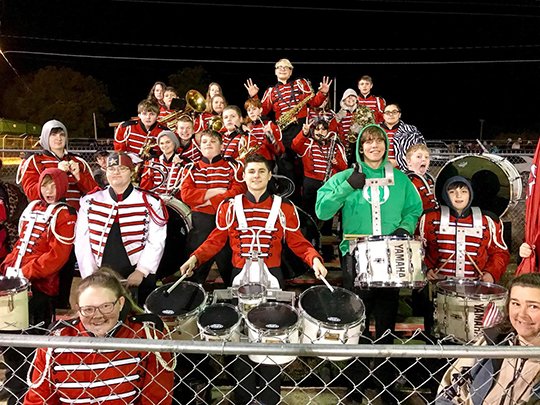 The band will have the honor of marching down the world-famous 98-foot parade on Bridge Street, the shortest street in the world in everyday use, for the 15th edition of the parade.

"The members of the official Parade Committee have tossed around the idea for years of having a marching band among the entries in our parade," said Bill Solleder, marketing director for Visit Hot Springs, the parade's sponsor.

Solleder said it was "sort of lucky happenstance" that Chris Johns, the director of music education for the Mountain Pine School District, heard that the committee was looking for a marching band and volunteered to have the Red Devils' band take part.

"It will be an absolute honor for our music program, our school, and our community to be able to take part in such a well-known event here so close to home," Johns said. "Additionally, to be the first marching band to ever participate in the parade is something that we will be able to commemorate and take pride in for years to come. We are thrilled to be a part of the parade this year and will begin working in preparation."

Entries are now being accepted for the parade; only 40 parade entries are accepted each year. Interested parties can submit an official entry form to Leysa Lowery of Visit Hot Springs.

Call Lowery at 501-321-2027 or drop by the Visit Hot Springs offices in the Hot Springs Convention Center off Church Street for more information.

Participation will be closed once the 40-unit limit is reached.

"You can get the entry form by going to www.shorteststpats.com," Lowery said.

Entry forms may be mailed to Lowery at the Hot Springs Convention Center, 134 Convention Blvd., Hot Springs National Park, AR 71901, by March 1. All entries must be approved by the Parade Committee.

Because of logistics, Lowery said the committee has limited the number of entries for several years.

"And we have already had 27 entries for this year's parade," she said.

The parade begins at 7:30 p.m. this year, an hour later than usual, to give Oaklawn racing fans time to watch the Rebel Stakes at the track and still have time to find their spot on Bridge Street.

Weekend festivities will kick off with a free public concert by music legends Grand Funk Railroad on March 16 at the Broadway Entertainment District stage. On March 17, immediately following the parade, there will be another free public concert at the same location by Morris Day and The Time.