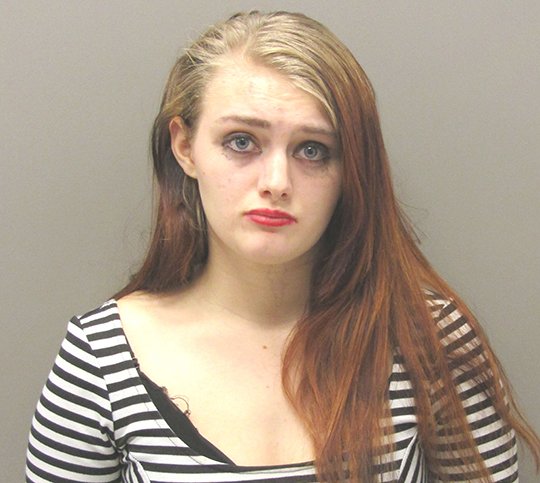 A local woman convicted of allowing her newborn son to starve while under her care in 2016 was sentenced to three years in prison at the conclusion of her two-day trial Wednesday in Garland County Circuit Court.

The six-man, six-woman jury deliberated for about 30 minutes before finding Summer Rose Kazzee, 20, guilty of first-degree endangering the welfare of a minor, punishable by up to six years in prison. Following a brief sentencing hearing, jurors then deliberated for about an hour before recommending the three-year sentence late Wednesday evening.

The trial of her boyfriend, Kody Nathaniel Weber-Kio, 22, who was facing the same charge, was set to begin Thursday, but he opted to plead guilty in chambers before the trial began. He was sentenced to six years in prison, with all but one day suspended, fined $3,501, and ordered to pay $420 in court costs and fees.

Deputy Prosecutor Kara Petro said Thursday it was determined Weber-Kio was not the biological father of Kazzee's son as previously believed, and he admitted in court to lying on the hospital forms at his birth.

"She was already pregnant when she first moved in with him," Petro said. While he was still responsible for the condition of the baby, she said he was less culpable than Kazzee, especially since he was often at work while she was home alone with the baby. Petro said she didn't know the identity of the baby's father.

"I honestly had no idea what to expect," Petro said late Wednesday of Kazzee's sentence. "I was very happy. It was really all about protecting the little one. I actually thought they might just give her probation."

A court order barring Kazzee and Weber-Kio, who both list a Third Street address, from contact with the baby remains in effect.

Kazzee did not testify during the guilt phase of her trial, but briefly testified Wednesday during her sentencing hearing.

Under questioning by her attorney, Clay Janske, Kazzee described how she was home-schooled after being bullied in public school and basically had a ninth-grade education. She also revealed she was raped and sexually molested from the age of 3 until she was 10 by a man who was later convicted of raping her and sentenced to two life terms.

Janske had requested a mental evaluation for Kazzee in July 2017 and while ultimately she was found fit to proceed with trial, Janske said Thursday she was diagnosed as "low functioning" and suffering from Post-Traumatic Stress Disorder.

Kazzee and Weber-Kio, referred to by Kazzee as her fiance, have twins together that were born after their arrests for endangering her son, who has been in foster care since his discharge from the hospital. She said her twins are about 2 months old and both are healthy and she and Weber-Kio had custody of them.

She said she had been getting help in caring for the twins through Change Point Pregnancy Care, a local religious organization that helps women with crisis pregnancies, and Trinity Home Health of Arkansas in Hot Springs.

Janske noted how Kazzee was overcome with emotion during testimony from Tonya Ross, her son's foster mom, who talked about how well he was doing. and asked her how that made her feel.

"I've missed most of his life," she said. "It's killing me. I'm so scared I'm never going to see him or my two other babies again." She asked the jury to give her probation and noted, "I can get a job and do all the things (required)."

On cross, Petro questioned Kazzee about the condition of her son, who was emaciated and weighed less than his birth weight at 8 weeks old under the care of her and Weber-Kio. Kazzee said, "He was born really small and I didn't really notice."

Janske said he found the sentence Kazzee received "unbelievable," and that he had expected probation.

"I realize Summer was a terrible mother, but to send her to prison after the jury heard about her life? I put on the evidence of her being raped most of her life and that she had no education and how pitiful she is. For them to give jail time was absolutely heartless."

Janske said it may be time for Arkansas to follow the majority of states in only allowing judges to decide on the sentence for offenders. The only states where juries decide sentences are Arkansas, Kentucky, Missouri, Oklahoma, Texas and Virginia.