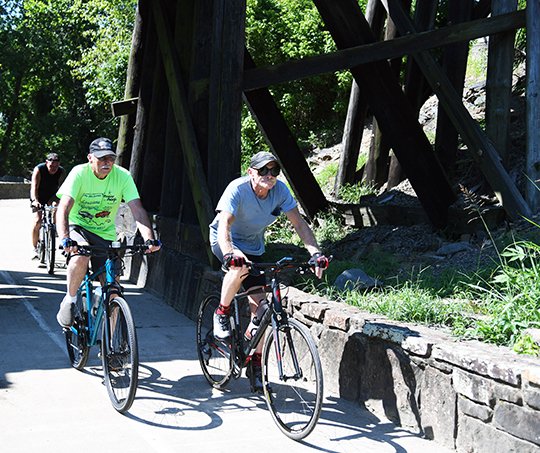 The Sentinel-Record/Grace Brown GROUP RIDE: Bicyclists make their way down the Hot Springs Creek Greenway Trail on Wednesday. Outdoor activities are part of what draws millions of visitors to Garland County each year, according to a new report.

Tourism in Arkansas increased impressively in 2017 over 2016, with over 3 million visitors spending nearly $800 million in Garland County alone, ranking the county second in the state for total travel expenditures, according to a report prepared by inVeritas for Visit Hot Springs.

The report was released just two months after the CEO of Priceline named Hot Springs the No. 1 emerging travel destination in the United States.

Each year, Garland County draws millions of visitors with its variety of offerings, from one-of-a-kind entertainment and shopping to its natural beauty and wealth of outdoor activities, according to the report.

It says travel and tourism are an essential element of the Garland County economy, and the county's travel expenditures have increased 43 percent since 2010.

"(The report) just gives us a snapshot at the previous year. We like to see if we've gone up, down -- it's just another tool to look at and see how the tourism economy is doing in Garland County. It's a very good tool for us and it's a good tool for economic development, as well," said Steve Arrison, CEO of Visit Hot Springs.

According to the report, Arkansas' 2 percent tourism tax continues to provide an important revenue stream for the state. Tourism tax collections totaled $15,897,536 in 2017, a 2.8 percent increase over 2016's collection of $15,461,541, the Arkansas Department of Finance and Administration said.

Visitor spending in Garland County in 2017 generated over $61 million in state and local tax revenue, helping fund jobs and public programs such as firefighters, police, teachers and infrastructure. The county accounts for nearly 11.5 percent of the state's travel-generated employment.

Nearly 7,600 jobs in Garland County are directly supported by travel and tourism.

Oaklawn Racing & Gaming is a mainstay in Garland County, attracting millions of visitors each year to its premier thoroughbred racetrack. In 2017, Oaklawn awarded a record $29 million in purses.

The $8 million renovation of the historic Thompson Building was completed in 2017, with the opening of The Waters Hotel, a 62-room boutique hotel featuring The Avenue restaurant, spa, and state-of-the-art amenities. The historic Malco Theatre reopened following a nearly yearlong renovation.

"All this new investment coming to town, everybody's looking for information on our marketplace. I think (the report) serves two very good purposes: it takes the temperature of the tourism climate from the previous year, but then again it provides us with facts on our tourism economy and hopefully, as well as it's been doing, it's helping attract not only tourism businesses but all sorts of investment in the city and Garland County," Arrison said.

"Everything has increased, which is great; that's what you like to see. We're never happy -- we always want it to grow larger than it's already growing, but all in all we're pleased with the research."