'The Soul of Arkansas' to open at convention center in October 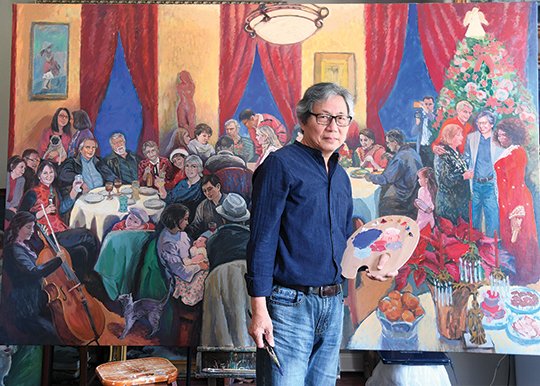 ARTIST: An exhibit by artist Longhua Xu will open at the Hot Springs Convention Center in October. The exhibit, entitled "The Soul of Arkansas," consists of 40 paintings depicting the people and culture of Arkansas.

"The Soul of Arkansas," an exhibit of 40 paintings by internationally recognized artist Longhua Xu, will open in October at the Hot Springs Convention Center.

The north concourse of the convention center is being converted into an art gallery for the exhibit, which, according to Mary Zunick, cultural affairs manager for Visit Hot Springs, should be the first of many temporary exhibits in the space. 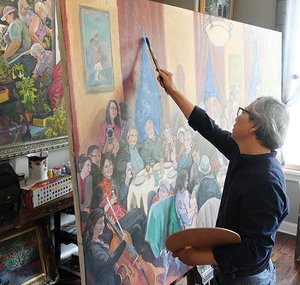 The Sentinel-Record/Grace Brown EXHIBIT: Artist Longhua Xu makes the final brush strokes on a large scale painting inside his studio. Xu is finishing up a series, entitled "The Soul of Arkansas," set to be on display at the Hot Springs Convention Center in October.

"He has been working for a number of years on this exhibit," Zunick said. "He's painting the people of Arkansas, and it's not just the images we see in, say, advertising -- these are the true people, whether it's people at the farmers market or someone's grandmother or a farmer, they're true people and he's finding the beauty in these people of all ages, shapes, sizes."

The exhibit will open to the public Oct. 5 after a private showing on Oct. 4.

Xu is a 30-year resident of Hot Springs, having settled here after emigrating from China following the country's Great Cultural Revolution, according to a news release from Visit Hot Springs. One of his most well-known works is "Mother Nature," a sculpture at Central and Fountain that has been a focal point of the city's downtown historic district since 1992.

"We've been living here for years and the reason we're living here is because we love Arkansas, the culture, the people, the landscape and the famous waters," Xu said. "I always wanted to do something with the beauty of Arkansas, so we searched, but it's very difficult to come up with an idea. Finally, I said, 'What about the people, the spirit, the soul of the people in Arkansas?'"

"We're really fortunate to be able to have it here, in my opinion," Zunick said. "It's not like there was a submission process; he's been working on this and we found out about it, and what a great exhibit that we are able to have here in Hot Springs. I know he's been working very hard on it for the last two years but I think some of the images date back further than that."

According to the release, Xu's interest in art began as a child in China when his older brother, Binghue, would take him to the park to paint landscapes. As his talents blossomed, the Chinese National Arts and Crafts Company, created after the reopening of trade relations between the United States and China, selected him, as part of an elite group, to learn more traditional Chinese art at Luo Qing in 1971. This art facility, which encompassed all of Shanghai province, was dedicated to furthering the art education of gifted students from all over China to create a new generation of professional artists following the end of the Cultural Revolution. Xu graduated from East China University of Technology with a degree in Fine Arts and went on to teach art at Shanghai University of Technology until 1989.

He began displaying his art nationally in 1972, with several exhibitions all over the country, including the Shanghai Art Museum. He also erected several monumental sculptures in Shanghai. Many of his works were published in nationally distributed magazines in China and presented as national gifts to foreign dignitaries. One of his sculptures was selected to be in the "Complete Works of World Master Sculpture (The End of the 19th Century to Present)," the release said.

In 1989, he was invited to immigrate to the United States with the title of Outstanding Artist under the Extraordinary Ability program. He felt that in America there would be more access to artists from all over the world, it said.

Since then, he has created countless pieces of public art for parks, schools and hospitals, and numerous pieces for private collectors.

"Longhua is an exceptional artist, but this exhibit is more than just his art," Zunick said in the release. "He has added so much to the arts and culture of his adopted hometown, more than just visual art, and it's fitting that he be honored by Hot Springs with this exhibit, not in a museum or gallery, but in a public space to share 'The Soul of Arkansas' with the people.

"In a world where the connection and relations between China and America are not always harmonious, this exhibit is a celebration of both cultures. Longhua's incredible talent and the training he received in China have absolutely left a permanent mark on the artistic landscape of Hot Springs as he lived and worked here for the past 30 years. This exhibit is the embodiment of the connection to his adopted hometown."

Several of his works have gone on to be designated national treasures and cataloged in the Smithsonian Institution Catalogue of Great Public Works. Although sculpture is his passion, he loves all art media. He has always said, "In order to fully express one's ideas, thoughts and emotions, one must be proficient in all techniques of art. Since art is not separated by country or race, then it should also not be separated by technique or medium. This way, the expression of those ideas and visions are limitless," the release said.

This philosophy is in many ways similar to that of his hero, the artist Michelangelo, who was also proficient in many techniques and media. Xu continues to explore new avenues of expression with stone carving, relief sculpture, bronze, pottery, oil, acrylic, and even architecture.

Print Headline: 'The Soul of Arkansas' to open at convention center in October