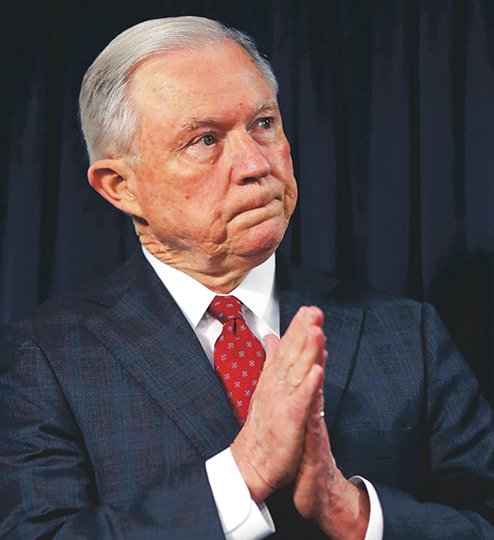 U.S. Attorney General Jeff Sessions will still visit the campus, along with Mick Zais, deputy secretary of education. The meeting will not be open to the public, Anderson said.

U.S. Rep. Bruce Westerman, R-District 4, said in a telephone interview that it was his understanding there will be two roundtable discussions -- one with law enforcement and one with the local community.

Anderson said a group of invited guests will attend a roundtable discussion with Sessions, adding that the guests would include local lawmakers, Lake Hamilton School Board members, other local superintendents, teachers, parents and patrons of the district.

"I've been aware of the school safety program out at Lake Hamilton for quite some time, even going back to my days on the school board and the state Legislature," Westerman said. "I know it's something they've been doing for decades before the Columbine shooting and before Jonesboro, and I know they've made improvements to it over the years, so with all the emphasis on school safety I wanted to bring that to the administration's attention because I believe we can learn stuff from around the country.

"It's been said that the states are the laboratories for democracy and a lot of the things that we face on a national level have been addressed at local levels."

Westerman said he met with White House officials who then reached out to Anderson. Plans to visit Lake Hamilton were being finalized when Anderson visited Washington, D.C., just a few weeks ago, the congressman said.

"One of the issues or distinctions that's out there is that rural schools are different from urban schools and with the response time needed to get to some of these rural schools, we need to have a hardened campus and... emergency responders in place on the campus," Westerman said.

"One thing I hope they get out of it is they see that there is a distinction between rural and urban schools, and also that there is a way to go about hardening a campus and having people on campus to address some of these situations," he said.

"It's something that's not just knee-jerk; this has been going on for decades and it's put a lot of thought into it and a lot of preparation. And also one of the things that Steve Anderson points out is that it's not an extremely extensive program. They're doing it with volunteers who are already employed at the school."

Anderson said while Lake Hamilton is hosting the meeting, it is being run and coordinated by the Department of Justice. The Federal Commission on School Safety is making visits to schools of varying sizes across the country that are all taking different approaches to school safety, he said.

The media will be invited in briefly, but the meeting itself will be closed to the press, Anderson noted.

Anderson stressed that in the district's security plan -- which has been in place since 1993 -- no teachers are armed.

The district has two uniformed and armed school security officers with Commissioned School Security Officer licenses. One works days and one works as a night watchman and during evening events, he said.

In addition, two central office administrators -- soon to be three -- are licensed, and while they may or may not be armed on a daily basis, they have access to security equipment and firearms in secure locations that are not made public, Anderson said.

The district also has a small number of undisclosed, noninstructional employees with the same license and training and the same access to security equipment. This number, he said, may change from time to time depending on staff changes.

In August, the district will also have its first school resource officer, Garland County sheriff's Deputy Richard Huffman, on campus.

"Our security responsibility is that we react only until the professional law enforcement arrives," he said.

Anderson said while there is a lot of talk about armed security officers, it is just one part of the district's overall security plan.

In 2013, Lake Hamilton was among 13 school districts in Arkansas allowed to continue using teachers, administrators and other staff as armed guards. The Arkansas Board of Private Investigators and Private Security Agencies said it would allow school districts to keep their security licenses for two more years after first voting to revoke two districts' licenses.

As reported in 2014 in the Arkansas Democrat-Gazette, the panel looked at schools' licenses for using school personnel as armed guards after then-Arkansas Attorney General Dustin McDaniel said the permits should not be issued.

Anderson said Monday the Legislature subsequently passed a law that abolished the board that once supervised the districts' on their security plans, and put all supervision under the direction of Arkansas State Police.

"Now licensed commissioned school security officers have to go through 60 hours of training for the initial licensure and 24 hours for renewal, I believe, every two years," he said.

While this option has worked for Lake Hamilton for 25 years, Anderson said it is just one that some rural school districts find works well. He added that he knows of at least 20 other districts in the state that have similar security plans in place.