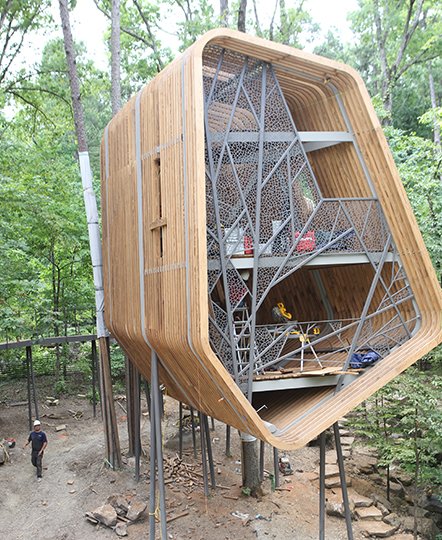 The public will get its first look at the Garvan Woodland Gardens Tree House, a fanciful but educational structure suspended within the Evans Children's Adventure Garden, on Saturday, June 30.

Bob Bledsoe, the botanical garden's executive director, said Tuesday that the Tree House is "more than a playhouse." It is also an educational center that delves into how trees grow and propagate in a state where around 60 percent of the land is covered in forests.

The $1.862 million Tree House project was privately funded, Bledsoe said. The garden is part of the Fay Jones School of Architecture + Design of the University of Arkansas. Bledsoe said no state funding was used as part of the project.

A news release said the Adventure Garden is about a quarter-mile stroll from the garden's Welcome Center. The Tree House, its fanciful Root Plaza and the newly renovated circular bridge in the Children's Garden will all be open on June 30.

A Tree House trolley will also be available to provide rides to and from the Tree House. Visitors may purchase a wristband for $5 each and ride all day until 5 p.m.

Sherre Freeman, Garvan Gardens' marketing director, stressed that the event is only the "soft opening" for the Tree House, adding that the grand opening will be scheduled for a later date, likely this fall.

"It's going to be ready to be walked through, but the landscaping is not finished," Freeman said. "A lot of it is, but some of it's not. Some of the educational components that are going inside, and maybe outside, too, are not going to be there yet."

Becca Ohman, the botanical garden's director, said the vision for the Tree House is to allow children to express themselves, to test their limits, and to allow them to engage with nature at the most basic level. The release said dendrology, or the scientific study of trees and wooded plants, is the driving theme behind the form and program of the structure, which features interpretive learning and artistic elements to aid in teaching the importance of trees in the environment.

"Really, we wanted to connect the guests and the users with their surroundings and how the forest interacts with people, and how people interact with the forest, all the way down to the functions of a tree, and that is how the Tree House and the surrounding interpretive elements are designed," Ohman said.

The structure consists of three levels, accessible from the ground and an overhead walk, and each level is based upon a different part of the tree and its function, allowing visitors an intrinsic, almost subconscious, learning opportunity that builds into the experience.

The first, most basic level focuses on the roots of a tree.

"We want to teach children how trees use their roots to absorb water and nutrients from their surroundings. Then, it grows to the trunk level, and then beyond that to the leaves and the flowers," Ohman said.

Garvan's inaugural Celebrate Summer day will be held June 30 in conjunction with the Tree House's soft opening. Children's craft booths will be open from 9 a.m. to 1 p.m. and are included with admission or free to members. Kids can enjoy face painting, work farming and leaf rubbing.

As for future projects, Ohman said in May Garvan Gardens was granted $450,000 by the Arkansas Natural and Cultural Resources Council for the development of the western gardens. She said developers anticipate paving the main pathway from the Garvan Pavilion to the Perry Wildflower Overlook.

"Our goal there is to make the gardens even more accessible and to encourage exploration of the most western parts of the garden, and we'll be developing landmarks along the way for wayfinding and rest and respite for our guests as they travel, and really also looking at ways to enhance and celebrate some of the historical areas of Mrs. Garvan's Garden, some of her original garden spaces, so that'll start soon," Ohman said.

The garden will be selling family memberships at several locations throughout the day on Saturday. Due to the growth of the garden's offerings, annual membership prices will increase on July 1.

Garden admission is $15 for individuals ages 13 and older, $5 for children ages 4-12, and free for children younger than 3 years old. Well-behaved dogs on a short, non-retractable leash will be admitted for $5 each. Only one dog is allowed per guest.