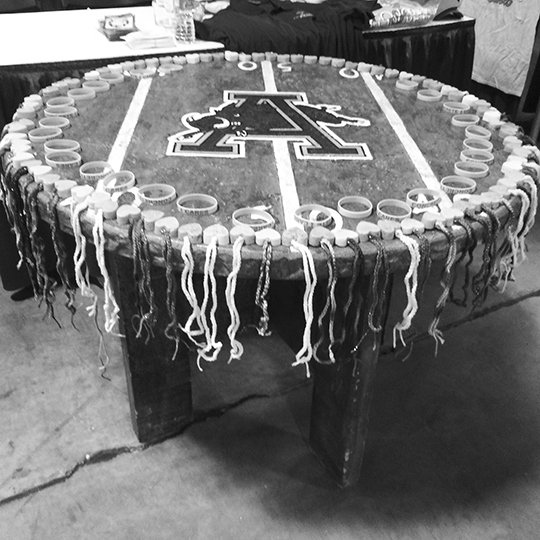 Submitted photo RAFFLE ITEMS: Lightweight concrete heart necklaces and a concrete Arkansas Razorback table are to be raffled off by Concrete Cares during the Arkansas Ready Mixed Concrete Association Convention this weekend at the Hot Springs Convention Center.

For six years, the nonprofit organization Concrete Cares has been fighting cancer "one yard at a time" through concrete-related fundraising events, including one in Hot Springs this weekend.

Concrete Cares was born with the goal to expand the awareness of the need for cancer research and fundraising by the concrete industry.

The organization's founder is Mike Murray and his wife, Donna, of Bella Vista. Murray owned a decorative concrete supply business in Kansas City before retiring and relocating to Arkansas. The story of the organization's origin stems from a spilled beverage on the white concrete countertops inside the business.

"One day somebody spilled something on the countertops and it turned pink, and my thought was, 'You know what, I'm going to start making pink concrete for breast cancer awareness,'" Murray said. "It's kind of a joke in the industry, most of the red turns pink after a while, anyway."

Now, their goal is to use concrete to make a difference in the lives of those affected by cancer and the mission has spread out of Arkansas and into states including Nebraska, Colorado, Arizona, Kansas, Missouri, Texas, Nevada, Louisiana, South Dakota and South Carolina.

Victims of cancer are chosen by community members to benefit from Concrete Cares. Murray said the organization usually does one big fundraising event per year.

Concrete Cares recently returned from World of Concrete, an international event in Las Vegas dedicated to the commercial concrete and masonry construction industries, where they raised over $50,000 for a childhood cancer foundation called the Candlelighters.

"This group just amazes me. They do a lot of fundraisers -- they're out of Las Vegas but they also raise money that has touched us. They raise money for funerals and then they go to every funeral when a kid passes away," Murray said. "Sometimes I think concrete is a tough job but it's not as tough as what those girls go through. I'm getting up there in age but how I want to spend the rest of my life is trying to help people."

Fourteen-year-old McKenzie West was chosen for the next fundraiser. West was diagnosed with an aggressive form of leukemia in October 2017.

Murray said West is a straight-A student in school, a member of the Beta Club, vice president of her school's art club, and competed in the 400, 800 and triple jump for her track team at West Memphis Jr. High. She has also been an active volunteer since 2014 at St. Jude Children's Research Hospital, at which she is now a patient.

Now, because her immune system is virtually nonexistent, she is unable to attend school or ballgames and cannot be in crowds of people.

West's treatment plan is two-and-a-half years long with chemo treatments every week. She alternates between nine different chemos, sometimes receiving up to five treatments in one day.

Concrete Cares will attend the Arkansas Ready Mixed Concrete Association Convention this weekend at the Hot Springs Convention Center and Embassy Suites Hot Springs -- Hotel and Spa to raise funds for West and her family.

Concrete Cares shirts and necklaces, a concrete Arkansas Razorback table, and other items will be raffled off during the event.

Murray encourages other members of the concrete industry to get involved in promoting cancer awareness in their own communities.

"One thing that we're trying to do, we have our Concrete Cares decals and we're getting a lot of concrete trucks all over the country to put them on their trucks. If they want to make a small donation to us, we're not going to turn it away, but what we want them to do is work within their community," Murray said.