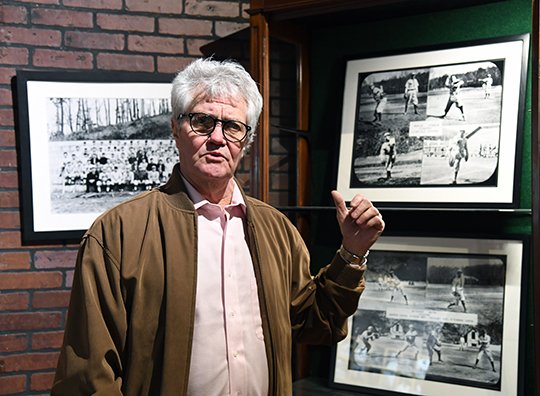 The Sentinel-Record/Grace Brown HISTORY: Robert Raines, owner of the Gangster Museum of America, gives a tour of a new gallery in the museum featuring baseball memorabilia from the famous spring training days in Hot Springs in the late 1800s through the early 1900s. A soft opening for the gallery is set for Saturday.

A baseball gallery opening inside downtown Hot Springs' Gangster Museum of America should pique the interest of history buffs and fans of the sport as it reveals some Hot Springs history from long ago.

A soft opening for the gallery is set for Saturday, during which Mark Blaeuer, author of "Baseball in Hot Springs," will sign copies of his book between 11 a.m. and 4 p.m. The gallery's grand opening is scheduled for March 24, just in time for the inaugural Hot Springs Baseball Weekend, set for March 23-24.

Framed photos of baseball Hall of Famers and major league players adorn the walls, spaces and glass cases of the gallery, along with an old scoreboard, statues, baseball gloves, uniforms and other relics collected by Robert Raines, owner of the museum, located at 510 Central Ave.

Raines said the idea to incorporate a baseball gallery into his existing museum came to him in 2016, and once he announced his intentions to the public, he began receiving phone calls and emails from individuals who wanted to donate items to the gallery.

A statue that was once inside Yankee Stadium in New York and belonged to the late Jennings Osborne, a wealthy Arkansas philanthropist who was known for, among other things, his extravagant Christmas display at his home in Little Rock, is now also being displayed inside Raines' gallery.

Raines grew up in Little Rock and Pine Bluff and said his interest in Hot Springs history and his love for the city first began in 2007 while helping a friend move into his newly purchased business.

"I came over here to move a buddy of mine who bought the Villa, and we were sitting down there on a bench in front of the building. A cop came by walking a beat, it was about 10 p.m., and we were out there having a glass of wine. The cop tapped on the back of the bench we were sitting on and I just knew we were busted. He said, 'Are you guys enjoying yourselves?' We said 'yes' and he said, 'Well, have a good time, be safe,' and he walked on. I just thought, in Pine Bluff, if you were out at 10 p.m., you were usually on your way to the hospital with a gunshot wound," Raines recalled, laughing. "I just fell in love with Hot Springs."

He began researching Al Capone and the history of gangsters in Hot Springs and opened the museum in April 2008.

He said, 'We call this the gangster museum, but really, it's the history of Hot Springs, beginning in 1927 and going through 1967. Baseball is just part of Hot Springs history.'"

From the late 1800s through the early 1940s, Hot Springs was a premier destination spot for big league baseball spring training.

"There's so much history in Hot Springs. If you think about where the mobsters were from -- Chicago, Cleveland, Kansas City, New York, Detroit -- they all had major league baseball teams, so they would come down here and watch their guys spring train, because the mob really wasn't doing any business down here; they were just playing, relaxing," Raines said.

The baseball gallery is included in the admission to the Gangster Museum. In addition to the photographs and artifacts, guests will learn about the history of baseball spring training in Hot Springs through a video, which was contributed to by filmmaker Larry Foley. Foley wrote the documentary, "The First Boys of Spring," which was narrated by Malvern native Billy Bob Thornton. Outtakes from the documentary are included in the gallery video.