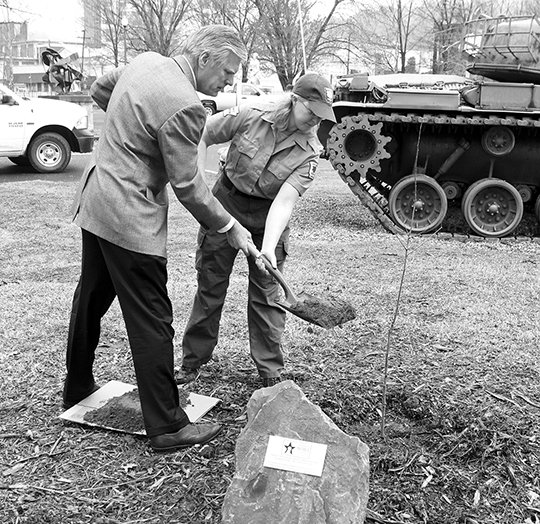 The Sentinel-Record/Richard Rasmussen DEDICATION: Hot Springs Mayor Pat McCabe, left, and Regine Skelton, a county forester and urban representative with the Arkansas Forestry Commission, toss dirt on a willow oak tree at the Garland County Veterans Memorial and Military Park on Monday during a dedication ceremony. The tree was planted to honor those who served in the military during World War I.

Garland County is sponsoring a World War I memorial tree to honor the Arkansans who served during the Great War.

A dedication ceremony was held Monday at the Garland County Veterans Memorial and Military Park, during which soil from the Meuse-Argonne American Cemetery and Memorial in France was added to the tree's existing soil.

The planting of the tree and the dedication ceremony were made possible through a partnership between the Arkansas World War I Centennial Commemoration Committee and the Arkansas Forestry Commission, which are urging Arkansans to plant trees before the end of the year to remember the more than 71,000 Arkansans who served during the Great War, including the 2,183 who died while in service, a news release said.

The goal is to have a memorial tree in each of Arkansas' 75 counties by the time the commemoration concludes at the end of 2018. The Arkansas Forestry Commission has provided 75 two-year-old willow oak trees for the project, which began in 2017.

The tree in Garland County was planted in the fall of 2017, said Regine Skelton, a county forester and urban representative with the Arkansas Forestry Commission, adding, "That way it could go ahead and start putting down roots and go ahead and get established in the area. We just had the ceremony today where we added the soil from the Meuse-Argonne American Cemetery."

The Meuse-Argonne Cemetery covers 130.5 acres in France. Most of the individuals buried there lost their lives during WWI. The soil was provided by the WWI committee.

"We were contacted in order to donate the trees and make sure the trees were planted in a way that would promote survival, and just give them general advice on it," Skelton added. "We're just making sure the tree makes it."

In the years following the end of WWI in 1918, memorial trees were planted all over the world to remember those who perished during the war. At least one stand of WWI memorial trees still exists in Arkansas in a small grove of holly trees on the campus of Henderson State University in Arkadelphia.