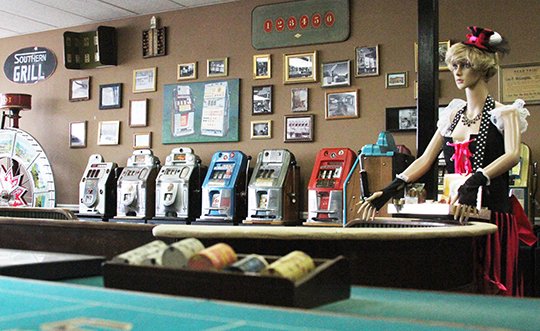 The Sentinel-Record/Rebekah Hedges MUSEUM: A wax figurine of a cigarette girl leans over a card table in the History of Hot Springs Gambling Museum. The museum holds more than 10 card tables and is home to 80 refurbished slot machines.

In its heyday, Hot Springs was known as the site of the largest illegal gambling operation in the United States, and the city made national headlines in 1967 when Arkansas State Police and the Federal Bureau of Investigation launched a massive effort to shut it down.

Now, decades later, a metaphorical door to the past has been opened in the form of the History of Hot Springs Gambling Museum.

The museum, located at 3339-C Central Ave., is managed and co-owned by Lanny Beavers, Chris Hendrix and Tony Frazier. Almost 51 years ago, Frazier and his slot machine repair shop, Spa Amusement Co., were raided during the effort to cease illegal gambling in the Spa City. Today, Spa Amusement Co. is back in business and operates from within the museum, and Frazier is back to doing what he loves: repairing slot machines.

Photos dating back to the 1960s of Frazier, his shop and the raid can be seen on display in the museum. Frazier estimates that he owned 300-400 slot machines in the 1960s, some of which were stationed outside of his shop on the street, which was then located on Second Street.

Beavers and Hendrix opened the museum a year and a half ago.

"My family moved here in 1966, so I was too young to remember the casinos and the gambling, but I had always heard about it and I was always kind of agitated that there was no place that I could go look and see what it would have looked like back then," said Beavers. "So, when we were batting around and discussing this place, we all had a bunch of stuff and it really got to a point that I think our wives said, 'Get your stuff out,' so, with Tony's help, we recreated what a casino would have looked like in Hot Springs."

They soon discovered that their space was not large enough to contain their collections, so they purchased a second space just a few doors down from the original space in the same shopping center. Now, the museum operates out of both locations.

With 80 working slot machines, over 10 gaming tables, and a vast collection of other memorabilia, Beavers said the History of Hot Springs Gambling Museum was born for future generations to "relive history."

"It's set up to relive history, to relive and bring back our past. We love this city and we just want to give it back," Beavers added. "Where else can you go to see a free, hands-on museum?"

There is no admission to enter the museum and patrons can try their hand at a variety of slot machines for free using the coins provided.

"Anybody can play them, but you have to use our money. You cannot use your own money because then it's considered gambling. You can play with our money. And they're not toys -- they were built for casinos," Beavers said.

Hendrix added that some of the museum's slot machines are 70-80 years old.

"These machines were built to withstand anything you could dish out because people would try to beat them, they'd get mad at them," Frazier said.

Beavers and Hendrix are constantly looking for items to add to their collections, and recently found a slot machine dating back to the 1960s.

"This one machine we just got recently, it's one of Tony's machines from back in the '60s. It's got his handwriting on the back of it. That was a pretty good find for us," Hendrix said.

Beavers and Hendrix consider themselves fortunate to have met Frazier, who Beavers describes as "the No. 1 historian in the city of Hot Springs."

"We call ourselves The Big Three," Beavers said. "What the three of us have done is we have gone back in time and we have brought 1966 back."

The museum is open from 10 a.m. to 6 p.m. Friday-Saturday, or by appointment.