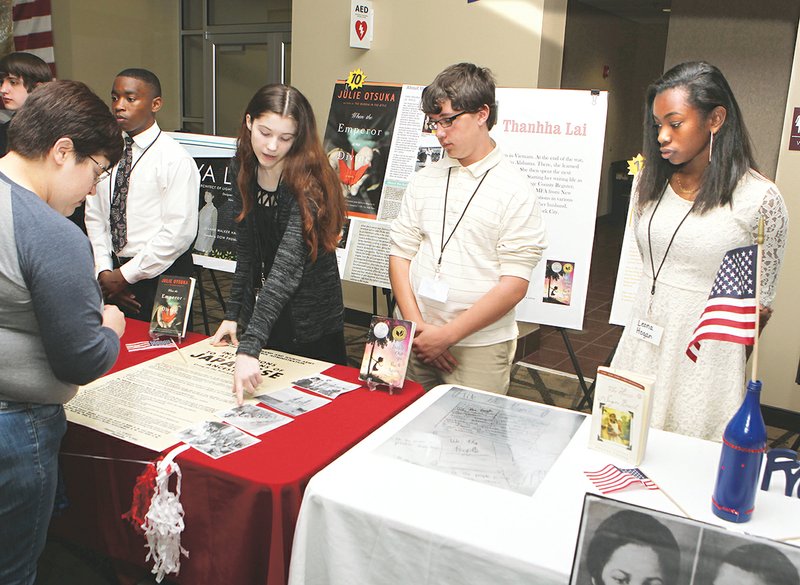 The Sentinel-Record/Richard Rasmussen WE THE PEOPLE: Crystal Lambert, left, listens to Malvern Middle School student Veronika Jergenson discuss her book as fellow classmates Jeremy Beck and Leona Hogan, right, listen during the "We the People: Our Stories" exhibit at National Park College Monday. The exhibit was sponsored on the NPC campus by the Cultural Diversity Awareness Club.

The exhibit was open to the public and sponsored by the Cultural Diversity Awareness Club.

Claudine James, middle school teacher, said the project started on the first day of school in August, and students have read numerous books related to individuals through history, developing presentations on what they read.

"Now, even more, we have to realize that our country is made up of so many different nationalities, so many different ethnic backgrounds, and so that's what our theme is this year, 'We the People: Our Stories,'" she said. "I have 43 students presenting 48 different titles and the main thing that I am really highly excited about is my students found their voice, and they learned to be inspired to read, but they also know that because of what they've learned from reading that they too can impact change in our world."

James said this exhibit was part of project-based learning, which is a method she has used for the last six years.

"My whole goal is to help my students enjoy reading. After we read books, then we write, and that's the English part about it," she said. "I can teach you to be a really good writer, I can inspire you to read, but at the end of the day if you're not a better person, have I really helped our world? So I'm trying to instill in my students to use reading to impact change. In fact, this is the first year we've added a civic engagement part to the exhibit, and the civic engagement is to almost beg you to read the literature we've read."

Students were encouraged to read all 48 books from the list, she said, but to be included in the exhibit, they only had to read 20 books. Students learned public speaking skills and have presented this exhibit at College of the Ouachitas along with NPC.

"These are kids that four months ago didn't even want to get up in the middle of class and say what book they were reading," James said. "I'm super proud of all of my students. Last week I nearly cried. One of my students that is just an average student in my class -- I invited someone down from the Butler Center of Arkansas Studies; they teach about oral communication and Arkansas history there -- and so he came from the Butler Center and went around and interviewed every single student which took him four hours, and this student that's just an average student that sits in the class and is not an 'A' student stood up with confidence and spoke and talked about his book. I had to leave because I started to cry.

"His mom walked in, and she looked at me, and we both had to walk away. She said he's going to be all right because now he found his voice. He realizes 'I may not be the perfect A student. I may not write the best essays. I may not make an 'A' on every test. But that doesn't mean I don't have value and I don't have worth.' That's what I really want and that's what project-based learning is. When you let kids do a project and you let them learn from the project. Lots of people say that's not good, but it's worked for my students."

According to student Ben Capes, who read "Dear Mr. Rosenwald," every student committed to their presentation and research to create the exhibit.

"It's been great," he said. "I'm very happy with all the work and commitment that everybody has put into this project along with all the help that we've gotten, and support. And the fact that we're even being able to present at National Park College today."

The book focused on businessman Julius Rosenwald, part owner of the Sears and Roebuck Company, who had a hand in education in the early 20th century, Capes said.

"So Julius Rosenwald was a businessman at the earlier part of the 20th century, and he was an owner of Sears, Roebuck and Company, so he was the initial founder of the Sears Company itself," he said. "He and Booker T. Washington were responsible for building more than 5,300 schools across the southern U.S., specifically for African-American children. Out of those schools, one of them was actually built in our hometown in Malvern and it's really interesting because a lot of people don't even know about Julius Rosenwald."

Capes said being in James' class and completing this project with his classmates has made him appreciate his education more.

"I can't even count how many books I've read this year with Ms. James," he said. "One of the quotes that Ms. James would always tell us is people will forget the way you look, or they might forget you, but they'll never forget the way you make them feel, and that's something that Ms. James would always stress to us this year. She's not only given us intelligence along with education, but she's given us something to look forward to and a meaning to school. It's not just getting good grades, but giving us a meaning in going to school. Her inspiration makes me want to get up in the morning."

"All these books really fit 'We the People' because they talk about Arkansas history and how that affects us now," she said. "Without them, we might not all go to school together. We have to learn about things like this so that we can really enjoy our education. Many people don't have that.

"The biggest thing that I've learned is how to treat people. Everybody has their views on things and there's big world problems, but really where it starts is in the schools. You even see how friend groups are. There are certain tiers in schools, and those are something we need to break. In this project, it helped me learn how equality and everyone seeing everybody as a person, not their race, their gender, their religion. We're all the same. You might have different color skin, but that person is just as amazing as you are."