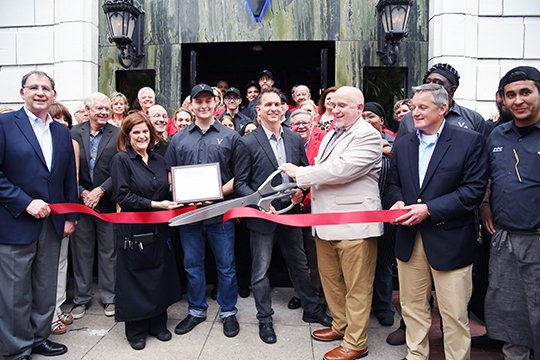 The Sentinel-Record/Grace Brown NEW BUSINESS: On Thursday, Vault co-owner Dr. Daron Praetzel, center, left, and General Manager Randy Womack cut the ribbon on Vault, the 100th business to open in the downtown are since the fire that destroyed the Majestic Hotel in 2014.

The Greater Hot Springs Chamber of Commerce celebrated the 100th new business to open in the downtown area since the 2014 Majestic Hotel fire with a special ribbon cutting at Vault, a highly anticipated new restaurant, on Thursday.

Cole McCaskill, vice president of economic development with the Hot Springs Metro Partnership, said in a news release that of the 100 new businesses that have opened, 90 are still open and 66 were net-new additions to downtown, meaning they occupied and opened in a retail space that was previously vacant as opposed to replacing a recently closed business.

McCaskill told The Sentinel-Record that the businesses included on the list were all located within the Thermal Basin Fire District, which was established in the fall of 2014, months after the Majestic fire. The district goes as far south as Grand Avenue and north to Gorge Road.

McCaskill spoke during the grand opening ceremony, recalling his perception of downtown Hot Springs four years ago and comparing it to present time.

"Think about your perception of downtown four years ago, or five years ago. I remember vacant storefronts downtown, and then the Majestic fire made a ton of news, and then, in an extremely unprecedented move, Preserve Arkansas placed all of downtown Hot Springs on its most endangered list, like downtown was just going to go away," he said. "It was a very contentious and very tumultuous time. There were public rallies for and against single issues, property owners were furious, elected officials were very frustrated. There was no vision, no excitement and no momentum. 'Potential' is the word that resonates with me when describing that time in Hot Springs history. It's been an incredible transformation since the Majestic fire.

"This building has been vacant since 1978. Who would have thought that four short years ago we'd be able to stand here and announce such tremendous growth?"

The Majestic Hotel was one of Hot Springs' oldest structures. It became dormant and fell into disrepair before catching fire in February 2014.

The loss of one of Hot Springs' historic and iconic buildings mobilized city and business leaders into action to revitalize and preserve the downtown area. Downtown Hot Springs, "America's First Resort," is famous nationwide for its history and culture, the release said.

In the weeks following the fire, civic groups formed the Downtown Game Plan Task Force, comprised of community leaders and downtown stakeholders who sought to prevent future tragedies like the fire and to improve the course of downtown which had suffered from a lack of investment for several decades.

That group met publicly and privately for four months and ultimately released a set of recommendations for the progress of downtown. The HSMP adopted those recommendations as a strategy and hired McCaskill as downtown development director in June 2014.

Each year since the fire, downtown has experienced subsequent rising investment levels.

Westerman, a native of Hot Springs, spoke about his childhood in Hot Springs and the revitalization he has witnessed in the city.

"Henry Ford once said that failure is an opportunity to begin again more intelligently. I wouldn't necessarily call what happened with the Majestic a failure, but I used to drive by there all the time and think, 'How sad is it that this old building is boarded up, nothing's happening with it,' and then what a low point it was when we saw it burn down ... but looking at it today, 100 new businesses have opened since that fire and that's just the beginning; we've got a lot of other exciting projects happening all downtown," Westerman said.

Praetzel credited his parents, who were present at the ceremony, with instilling in him his work ethics and the principle that "you're not entitled to anything; if you want something done, go get it, and once you've achieved it, keep working hard."

Praetzel said he arrived in Hot Springs eight years ago and immediately saw potential in the downtown area. He said Vault was built for more than just the environment of Hot Springs; it was also built to provide jobs for those who want to work.

"You know restaurants don't last very long; they come and go. When we built this thing, it was for something bigger and better than that. It was for the families that were going to be working in this place ... for the staff to have an incredible place to be proud of, so they can provide for the families and you all can come here and enjoy their talents. Then it's a success for me," Praetzel said. "Hopefully we'll do more."

He added that he has other downtown projects in the works but would not elaborate further.

In addition to 100 new businesses since the fire, downtown Hot Springs has seen 82 commercial property sales and more than $80 million in investment, according to the Chamber of Commerce.