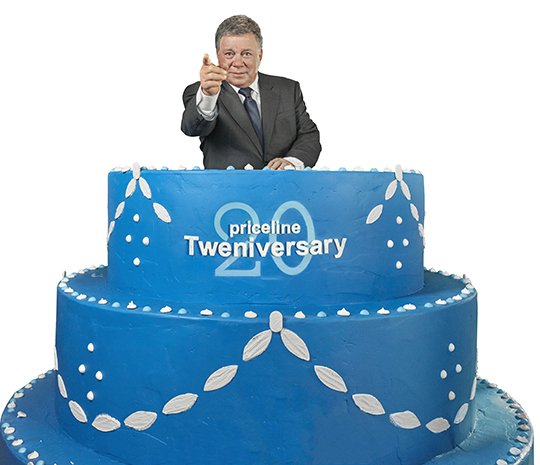 Submitted photo TOP PICK: Actor William Shatner appears in a promotional image released as part of Priceline's 20th-anniversary celebration. The CEO of Priceline named Hot Springs the No. 1 emerging travel destination in the United States during a "CBS This Morning" interview on Friday.

The CEO of Priceline named Hot Springs the No. 1 emerging travel destination in the United States during a "CBS This Morning" interview on Friday.

Following Hot Springs on the list is Cleveland, in second place, Durham, N.C., in third, Detroit, in fourth, and Deadwood, S.D. in fifth place. A representative for Priceline said this information is based on booking data between January 2013 and March 2018. The list was released as part of Priceline's 20th-anniversary celebration.

Brent Keller was named CEO of Priceline in 2016 after having been with the company for 19 of its 20 years. During the interview he spoke about travel trends and how the trends have evolved since the company's inception in 1998.

"Twenty years ago a typical trip is you fly out on the same airline, you fly back on the same airline, you stay for four or five days at the same hotel. People don't travel that way anymore. Today, people want to fly to a destination, maybe stay with their friends for a couple of days, drive down the coast, book a hotel at the last minute, and the mobile applications have enabled people to do that. And we're developing at Priceline more flexible packaging systems that allow you to build those kind of trips," Keller said.

He said this year in particular smaller cities and urban locations are seeing a spike in tourism.

Steve Arrison, CEO of Visit Hot Springs, told The Sentinel-Record on Friday that Hot Springs' tourism steadily increases each year, and he thinks the city will continue to see these increases.

"It's always nice to be included in a list like this, especially from an organization like Priceline. I think it's really a testament to our established attractions that we have here, and also a testament to the new businesses," he said.

"We have unique product here that offers something for the whole family. That's why we're America's First Resort -- we've been welcoming people for years. The product that we've had keeps improving and we have new products that we're adding to it, so it's making us a better destination and I think people are realizing it. People that haven't come for quite awhile are coming back, and then new people are discovering us through articles and interviews such as the one that was on the national news this morning."

Arrison said that while downtown Hot Springs receives a lot of attention, and rightfully so, the rest of the city is also experiencing growth and vitality.

"If you focus on downtown, it's an incredible story and every day it gets better and better, but we're seeing that in other parts of the city, too," he said, naming Garvan Gardens and Magic Springs as some of Hot Springs' booming attractions.

"The list goes on and on. The attractions that have been here for awhile are improving themselves, and then new things are coming in, so I think it's just an exciting time to be living in Hot Springs and to be in the tourism industry in Hot Springs," Arrison added.

In celebration of Priceline's 20th anniversary the company launched Tweniversary, a campaign developed to help travelers save $50 million over 20 days. A new deal will go live each day at 5 a.m. through May 19.