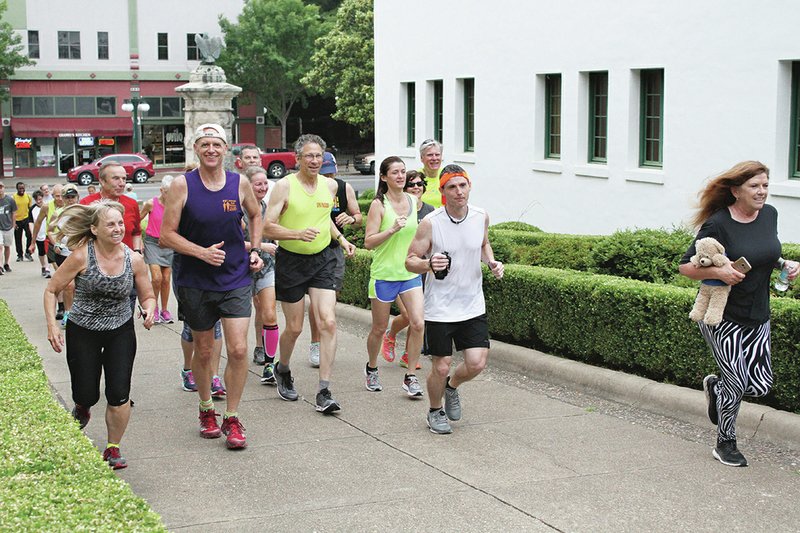 The Sentinel-Record/Rebecca Hedges Gil Schaenzle, right, who lost her only child, 21-year-old daughter Anna Rose, to neuroendocrine tumors cancer, was joined on a run through Hot Springs National Park on Saturday by members of the Spa Pacers.

When Gil Schaenzle lost her only child, 21-year-old daughter Anna Rose, to neuroendocrine tumors cancer, she devised a plan to honor her daughter that would not only help nurture her broken heart, but also celebrate her daughter's life while raising awareness, funds and hope for this misdiagnosed disease.

Schaenzle, who lives in Evergreen, Colo., is running in 50 national parks across the United States in her daughter's memory.

On Saturday, the day before Mother's Day, she added Hot Springs National Park to her list, and was joined by members of the Spa Pacers, a Hot Springs running group.

NET cancer is a cryptic disease where patients often present with confusing or duplicate symptoms that mimic more benign diseases or show no symptoms at all. As a result, patients go an average of five to six years before proper diagnosis.

Before her daughter's diagnosis, Schaenzle described her daughter as energetic, inventive and a go-getter, adding that the amount of grace, love and peace she displayed toward the end of her short life was nothing short of miraculous given how sick she was.

"She went through hell with this disease. It was a horrible, horrible death," Schaenzle said.

She recalled her daughter's personality as a baby. "She started out not sleeping at all when she was born. The nurses assured me that I had a live one," she said, laughing. "Sleeping was just kind of a waste of time for her; she was very energetic and I just tried to channel that energy into good things for her, and it wasn't that hard because she was just an amazing kid. Everyone just said that they felt incredibly blessed to have known her."

Around the same time Schaenzle's daughter was being diagnosed, Schaenzle was recovering from a double surgery on her ankle and knee and the idea to run through the national parks occurred to her.

"I'm a long distance runner and it was killing me not to be running, so one day Anna was having a really hard time and I just snuggled up beside her and I said, 'You know, I've got this crazy idea that I want to run in all the national parks when I get done with PT and you get done with chemo and you're doing better. Would you like to drive the car for me and support me?'" she said, adding that she was hurt when her daughter refused to be her driver. "I said, 'Well, how come?' and Anna said, 'I'm going to run them all with you, mom.'"

Schaenzle's daughter passed away on March 26, 2017, before they were able to make their "crazy idea" a reality.

"So, then it felt like unfinished business and I wasn't going to let that happen because I was trying to fulfill all of her final wishes," Schaenzle said. "It took a while to get things lined up, and of course I was actively grieving and I still am."

With 22 national parks, seven national monuments and one national preserve behind her, Schaenzle is nearing the halfway mark of her journey. She has thus far gone through 16 states, traveled 13,505 miles and has managed to run over 100 miles throughout some of the nation's most beloved national parks.

The day before she set off on this journey, a medical diagnosis of her own threatened to put an end to it before it even began.

"The day before I started the campaign in November my doctor calls me and she says, 'I don't believe what I'm seeing, but you have osteoporosis.' That was a real blow to me, and she said, 'You can't run, at least not initially. You can jog a little if you know you're not going to trip and fall,' so I was really upset by that because running is what I do and that's what this was supposed to be about," Schaenzle said. "But, amazing, beautiful, natural things have happened because I wasn't running. Because I was walking and hiking, I saw things I never would have seen. In hindsight, I'm actually grateful it happened."

She recalled a small group of birds during her trek through the Grand Canyon on her daughter's birthday.

"I was walking along the trail, nobody there, and these little birds were trying to get water desperately out of this frozen little puddle, and so I cracked it open for them and then put some of my own water in there for them," she said. "That wouldn't have happened had I been blazing down the trail. I would have never had that moment of natural beauty that could only come from a slower walk."

Schaenzle also met a fox on Santa Cruz Island in Channel Islands National Park that walked right up to her and "marked his territory," she said.

"It was hysterical. Another gentleman happened to be there and saw it happen and was laughing his head off and I said, 'This is going to be an awkward phone call to my husband tonight to let him know I now belong to someone else. And he's a real fox, too!'"

Along her journey, Schaenzle has shared the trails with alligators, bears, bobcats, elk, deer, pigs, eagles and snakes and weather conditions have been quite varied and extreme.

Schaenzle is working with The Healing NET Foundation to raise awareness about the disease.

"I will talk to anybody, because here's the problem: people that have this disease are being misdiagnosed and they are dying because of that. My goal in all of this is to talk to anyone who will listen. And please be your own best advocate; if you get a cancer diagnosis, please, please make sure that it is not NET, because that's the other two-fold problem: regular cancer can also be NET cancer," she said. "That's why I'm so passionate about this, because, one, I don't want anyone else to watch their child die. Because it's the worst thing in the world. And two, I don't want anyone to die that kind of death."