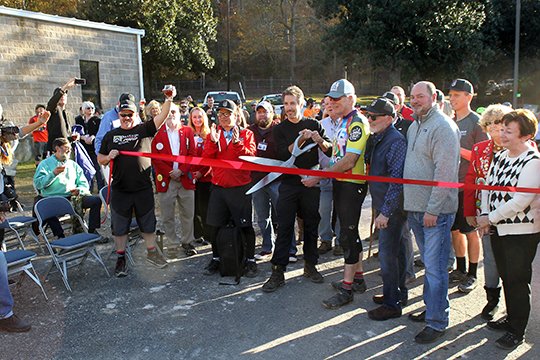 After a year of planning and development, phase one of the Northwoods Trail System finally opened to cyclists Friday following a ribbon cutting featuring local and national officials.

The event, which drew a crowd of around 100 people, took place at the Waterworks Trailhead at Pineland Drive. Several people gave short speeches about the project after Bill Solleder, marketing director for Visit Hot Springs, opened the event.

Solleder said that the work to bring the trail system to fruition has been a pleasure, thanking those who helped along the way. Among those he thanked was the water department for "giving up their playground" to the trail system.

Traci Berry, the new trails coordinator for the Northwoods Trails, asked Solleder if he has ridden mountain bikes before, to which he said that he hadn't, though he has previously ridden BMX bikes.

Berry said she thinks "we are going to see more and more" people switching to mountain biking.

Steve Arrison, CEO of Visit Hot Springs, said the project started when they learned about the success of the mountain bike trails in Bentonville which had a $137 million economic impact on that community in 2017.

Mayor Pat McCabe, wearing cycling gear, told the crowd he must not be a real mountain biker, as he was the only one there wearing knee pads, before thanking numerous people and organizations, including the Walton Family Foundation.

"Bentonville sets the standard. We're happy to be a distant second," McCabe said. He added that in the future they may become a "not-so-distant second."

The mayor also spoke about more projects coming to Hot Springs, including two grants worth more than $800,000 which the city had recently won.

David Wiens, executive director of the International Mountain Bicycling Association, and Gary Vernon, of the Walton Family Foundation, also spoke. Wiens said he has already gotten to ride some of the trail.

During his ride, Wiens said he met a man who was in his 20s and asked him if he had been riding for long, to which the man replied "nope," saying that he bought his bike three months ago after hearing about these trails.

Following the event, Wiens said that Garland County is a beautiful canvas for IMBA to build trails on. He also thanked many people for helping the project, including the National Park Service, and noted Hot Springs National Park is now the fifth national park to feature a mountain bike trail.

The Park Service in January held a public input meeting on a proposed Pullman Avenue trail connection to the Northwoods Trails. The Park Service, in partnership with the city of Hot Springs and Visit Hot Springs, with technical assistance from the International Mountain Bicycling Association, proposes extending an existing road that lies north of Pullman Avenue to connect to the new city trail network, a distance of six-tenths of a mile across national park property.

The park's Environmental Assessment is yet to be released on this.

Vernon and McCabe then cut the ribbon while the adults in the crowd toasted them with Superior Bathhouse Brewery's latest drink, Northwoods IPA.