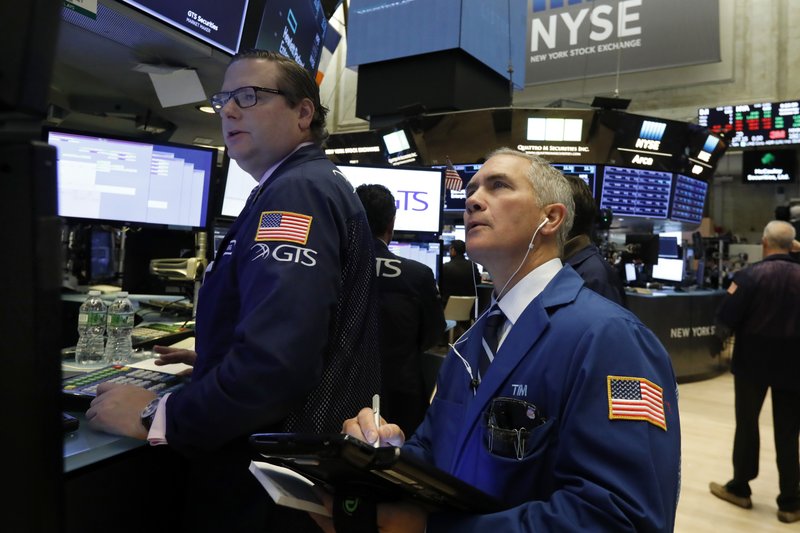 Specialist Gregg Maloney, left, and trader Timothy Nick work on the floor of the New York Stock Exchange, Wednesday, Oct. 24, 2018. Stocks are off to a mixed start on Wall Street as gains for Boeing and other industrial companies are offset by losses elsewhere in the market. (AP Photo/Richard Drew)

Another torrent of selling gripped Wall Street Wednesday, sending the Dow Jones Industrial Average plummeting more than 600 points and erasing its gains for the year.

The Nasdaq composite, with a hefty roster of tech stocks, bore the brunt of the sell-off, leaving it more than 10 percent below its August peak, what Wall Street calls a "correction."

"Investors are on pins and needles," said Erik Davidson, chief investment officer at Wells Fargo Private Bank. "There has definitely been a change in sentiment for investors starting with the volatility we had last week. The sentiment and the outlook seems to be turning more negative, or at the very least, less rosy."

Investors have grown concerned in recent weeks that Corporate America's tax cut-fueled earnings growth this year will be arrested in coming months amid rising inflation, uncertainty over the escalating trade conflict between the U.S. and China and the likelihood of higher interest rates. Recent data showing the housing market is slowing have also fueled speculation that U.S. economic growth will start to slow next year.

The outlooks from some of the companies that reported third-quarter results this week, including Caterpillar, 3M and United Parcel Service, only stoked those worries.

"You've seen more discouraging (company) commentary this quarter than you have the last two," said Tom Martin, senior portfolio manager with Globalt Investments. "You're really starting to get more of a groundswell of caution. There's some concern about the fourth quarter and what that's going to look like."

Bond prices rose, sending the yield on the 10-year Treasury note down to 3.12 percent from 3.16 percent late Tuesday. The slide in bond yields came as traders sought out lower-risk assets.

Technology stocks and media and communications companies accounted for much of the selling. Banks, health care and industrial companies also took heavy losses, outweighing gains by utilities and other high-dividend stocks.

Most companies that missed earnings expectations or issued cautionary outlooks were punished.

Shares in iRobot plunged 12.3 percent to $80.49 after the robotics technology company said tariffs will reduce its profitability in the fourth quarter.

Texas Instruments fell 8.2 percent to $92.01 after the chipmaker delivered quarterly results that fell short of Wall Street's forecasts, noting that demand across most markets is slowing.

S&P 500 companies are expected to deliver 22 percent earnings growth for the third quarter, with every sector except communications services, which includes Walt Disney, AT&T, Netflix and Google parent Alphabet, expected to show earnings growth, according to S&P Global Market Intelligence.

About 24 percent of the companies in the S&P 500 had reported third-quarter results as of Wednesday. Of those, 57 percent delivered earnings and revenue results that topped Wall Street's forecasts.

High-flying companies like Netflix and Amazon took some of the biggest losses Wednesday. Netflix gave back 9.4 percent to $301.83 and Amazon dropped 5.9 percent to $1,664.20.

AT&T was among the big decliners in the media and communications sector, dropping 8.1 percent to $30.36 after the communication giant's latest quarterly results fell short of Wall Street's expectations.

The Commerce Department said sales of new U.S. homes plunged 5.5 percent in September, the fourth monthly drop. The report is the latest sign that the housing market is cooling amid rising mortgage rates. Several homebuilders declined following the release of the report. Beazer Homes USA slumped 8.4 percent to $8.44.

Boeing was one of the few gainers Wednesday. It rose 1.3 percent to $354.65 after the defense contractor's latest quarterly results topped analysts' forecasts. The company also raised its estimates for the year, citing faster orders for aircraft.

Despite the tumbling stock prices, the U.S. economy looks solid. Helped by tax cuts, the economy expanded at a 4.2 percent annual pace from April through June, fastest in nearly four years. When the Commerce Department report on third-quarter growth comes out Friday, it's expected to show another solid pickup of 3.3 percent. Unemployment has dropped to a 49-year-low 3.7 percent.

Responding to the healthy growth, the Federal Reserve has raised interest rates three times this year and is expected to hike them again in December. "The economy is on solid footing," analysts at BNP Paribas wrote Wednesday. "We think the Fed will continue its gradual pace of rate hikes, for now."