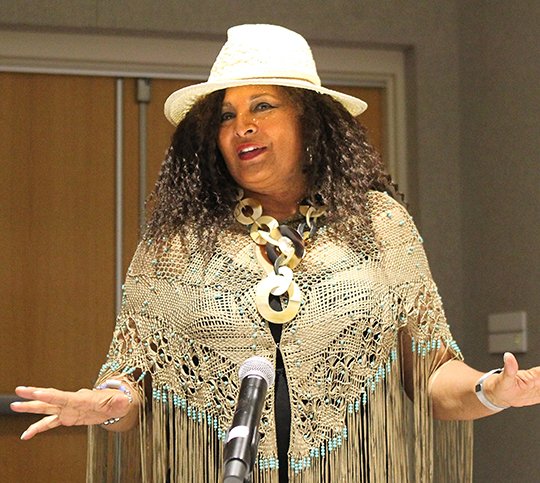 Pam Grier, one of the featured guests at the third annual Spa-Con, discussed her career in film and television and what it takes to succeed in show business during a panel at the Hot Springs Convention Center on Saturday.

Grier's showbiz career took off in 1971 when she starred in "The Big Doll House," followed by "The Big Bird Cage" in 1972. Grier said that she accepted her very first roles as an actress just to pay tuition to attend college at UCLA, because the tuition was too expensive for her to afford, even while working three jobs.

"Out of necessity comes genius," she said.

Grier soon became a leading lady in action films such as "Coffy," "Foxy Brown" and "Sheba, Baby," and eventually made her way into the television business, where she became a regular on "Miami Vice" in the 1980s. In 1997, she starred in "Jackie Brown," directed by Quentin Tarantino, and over the course of her career has worked alongside the likes of Samuel L. Jackson, Jack Nicholson, Sarah Jessica Parker, Steven Seagal and Robert DeNiro.

Grier credits her childhood and the way she was raised with allowing her to have the career she has had for almost 50 years. She said she was raised to accept people of all cultures and backgrounds and she hopes that the actresses of today learn to be open-minded.

"I didn't grow up not including, or hating, or discriminating against bisexual, homosexual or transgender people. We were embracing of everyone," she said. "I grew up with that and I brought it to film, and I think that's what gave me a 50-year career. There's a lot of actresses today and I'm hoping they reach that into their culture and their spirit. We all have gay relatives, and pastors, and hairdressers, and people who are just great people."

Some of her recent work includes a movie with Diane Keaton and Jackie Weaver called "Poms," about a group of women that form a cheerleading squad at their retirement community. Grier reflected back on her time spent working with Keaton, describing it as "absolutely amazing."

"(Keaton) was on my bucket list, and let me tell you, it was a hoot," she said. "You want to work with actors who are in your age range and share each others' narratives of how and why we're doing what we do."

In February, Grier is set to begin filming a Fox television series, "Bless This Mess," alongside actors Dax Shepard and Ed Begley Jr.

Grier spoke about getting into character for her roles and recalled a role that she auditioned for in which she played the part of a drug-addicted prostitute.

"When you prepare for a role, you are that character," she said, adding that to prepare for the audition, for three days straight she ate nothing but cherry pie to raise and lower her blood sugar levels, didn't bathe, didn't sleep, and let her leg and armpit hair grow out.

"You're actually living and being another person," she said.

In addition to her work as an actress, Grier is also a philanthropist, giving back to the community by training horses for individuals with disabilities, rescuing animals and working with children.

Sponsored by Subaru, Grier is a spokesperson for Dining Out For Life, an annual fundraising event that raises money for AIDS service organizations.

"Every year we host Dining Out For Life for one day, where all the restaurants donate their entire take to organizations locally for people who are living with HIV," she said. "Education is important, funding is important, and we take care of them, we manage them, and we're really good managers. We manage better than anybody else that you vote for or put out there -- if they can't do the job, then we will. I am part of our community, and I'm sharing my wonderful 50-year career with you."