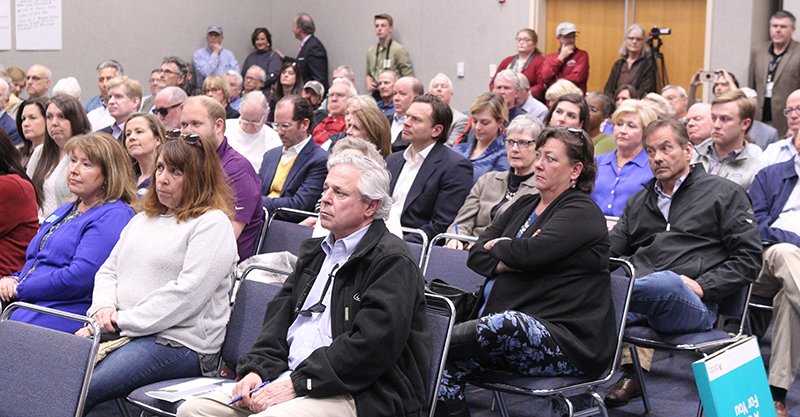 The Sentinel-Record/Richard Rasmussen FULL HOUSE: The audience gathered Tuesday at the Hot Springs Convention Center listens to a question-and-answer session about redevelopment possibilities at the Majestic Hotel site.

The city has laid down its marker for the Majestic Hotel property, explaining Tuesday that it's committed to redeveloping the 5-acre site in a manner befitting its prominent location and storied past.

"I can tell you whatever comes as part of the Majestic site, we're looking for something we're going to pop our collar on," City Manager Bill Burrough said during the second day of public planning sessions held at the Hot Springs Convention Center. "It's going to be world class. We want people to come here just for that. It would be nice to hear somebody walking down a Dallas sidewalk saying that they really need to go see it."

What that sight to behold will be remained unclear Tuesday, as the city stressed it hasn't endorsed any of the more than 200 online suggestions it's received or any idea or concept expressed during the two-day public forum. That input will be distilled into a report the University of Arkansas Fay Jones School of Architecture and Design is expected to present the city later this month, forming the basis for a request for proposals the Hot Springs Board of Directors could issue as early as next month.

"A lot of the questions that are being asked are leapfrogging to a place we're not at," Burrough, responding to audience questions about what will be built on the site, said. "We're going to get some really dynamic proposals. My biggest fear is that we would look to some of these proposals and give the impression our mind is made up, because I can tell you we have no idea what's going to go on that site."

"The answer is, 'There's just no place for us to stay,'" Deuschle said of responses from affluent in-state and out-of-state residents he's asked about Hot Springs. "They love all it has to offer. It's a tremendously superior town in terms of its offerings, its beauty, its history.

"There's no place like this in the country. How are you going to bring people who aren't coming? We need world-class accommodations -- an amenity-rich diversified resort, thermal pools, public space and people will flock here."

Grand Point's concept included a waterfall where Whittington and Park converge and luxury condominiums that could make downtown a residential as well as tourist destination.

"The demand is off the hook for those," he said of upmarket downtown living spaces. "There's also a second home potential there. You need that everyday traffic. We were out at 8:30 last night and trying to find places to eat, but it was kind of dormant."

Dr. Vijay Patel, CEO of VIPA Hospitality Management, told the audience he's raised $10 million for his Falling Water Resort at the Majestic concept, which he would leverage with tax incentives owing to the property's location in one of the Opportunity Zones the governor designated last year. He said there is potential to supplement that investment with $15 to $20 million multiple banks have verbally committed to the project.

Patel, whose group owns six hotels in Hot Springs, said his concept dedicates all 700 feet fronting Park Avenue to a public gathering space replete with splash pads, benches and boutique shops. He called it a 21st-century homage to the Majestic complex that closed in 2006 and was demolished a decade later.

Recreating the Majestic received the third most votes of concepts proposed during Monday night's public input session, ranking behind a public gathering/water feature and resort hotel.

"In the history of Hot Springs, all the landmarks either destroyed or bulldozed are replaced with nothing at all or a parking lot or something of lesser value," he said, noting that his group had attempted to partner on a project with the owner the city acquired the property from in 2015. "The Majestic should not be replaced with anything less than at least what it used to be.

"We propose an iconic development, so people of the future will know what we built up there. The Majestic was iconic. It was there 100 years. We propose recreating the Majestic."

Real estate agent Joe Goslee, speaking on behalf of Memphis developer Robert Allen of North Mississippi Real Estate Management, proposed a five to 20 passenger tethered hot air balloon. The smaller scale project could be operational in 180 days and only require 1 acre of the development. At $20 a ticket, the attraction would generate considerable return on investment without considerable risk, Goslee said.

"Mr. Allen would be interested in either building it, leasing it back to the city or a joint venture," he said. "The balloon is inflated 24 hours a day. You put on this balloon, 'Hot Springs has it all,' how many people are going to stand in front of that balloon and take their picture and send it worldwide? What a great source of advertising."

Burrough said the concepts all had merit, but that it would be premature to consider any them until a request for proposals can be developed and responded to.