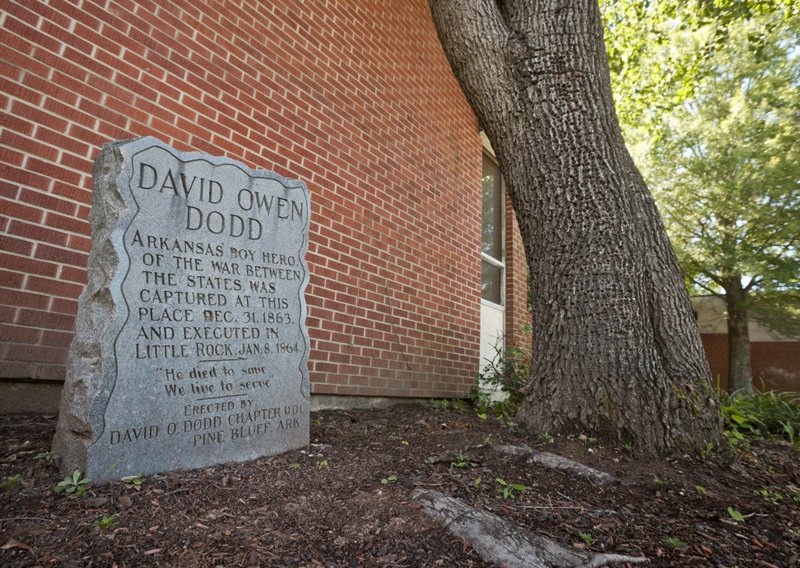 FILE - In this Sept. 18, 2012, file photo, a monument to teenage Confederate spy David O. Dodd, who was executed in 1864, is displayed in front of an elementary school named for him in Little Rock, Ark. Arkansas lawmakers are considering a bill that would make it illegal to remove or alter any military or historical monument on public property, including Confederate monuments, unless a state commission agrees to the changes. The Senate passed the bill 19-10 on Wednesday, April 3, 2019, but it has stalled in a House committee. (AP Photo/Danny Johnston File)

LITTLE ROCK -- Arkansas lawmakers are considering a bill that would make it illegal to remove or alter any military or historical monument on public property, including those honoring the Confederacy, unless a state commission agrees to the changes.

The bill's sponsor, Republican state Sen. Mark Johnson, said he was approached by members of an Arkansas historical society who were concerned about efforts throughout the South to remove Confederate monuments. He said the bill's aim is to preserve monuments from "political whims." He said he crafted it with an "eye on historic preservation, but to stop the people who want to destroy our history or heritage for their own political agendas."

"Wars fade in and out of acceptance," Johnson said.

The state Senate passed the measure 19-10 largely along party lines on Wednesday. It failed in a state House committee on Friday, but Johnson said he's considering bringing it back up next week if more committee members who support it are in attendance.

Under the broadly-worded bill, people who move or alter such monuments without permission of a state commission could be charged with a misdemeanor or felony, depending on the extent of the changes and a person's previous convictions. It wouldn't just disallow the removal of statues, since it defines a monument as any "statue, memorial, gravestone plate, nameplate, plaque, historic flag display, school, street, bridge, building, preserve, or reserve." Such items must have been constructed for or dedicated in honor of a historical person or event or military unit or organization.

A school named in honor of a historical figure, therefore, couldn't change its name under the bill. Statues and memorials couldn't be relocated or modified in any way, except for regular maintenance.

The bill would provide what Johnson calls a "safety valve," in which a waiver could be obtained by petitioning the Arkansas History Commission, which could approve the petition with a majority vote. The commission could still require the monument be "preserved to the greatest extent possible," unless the monument is a street, park preserve or reserve. Any reconstructed or rebuilt school must still retain its name.

Democratic state Sen. Linda Chesterfield raised concerns about the bill, saying it would stonewall those who want to remove Confederate monuments and would mean "we are stuck with whatever we have today -- where it is, how it is, for whom it is. And as times change, we may want to change that."

Opponents are also concerned that the bill would wrest control of local issues from towns and cities. Mark Hayes, Executive Director of the Arkansas Municipal League which advocates for cities and towns, called the bill "draconian." Communities erected monuments or named parks themselves and should have the same power to take them down or rename them, he said.

"People who live within a city are able to take care of themselves," Hayes said. "And if they decide they wish to remove, replace or change something within their city, I don't know why that would be a problem."

Gov. Asa Hutchinson is tepid on the bill, a spokesman said, saying it is "well-intentioned" but might increase bureaucracy for small changes to schools and buildings.

Earlier in the current legislative session, the same House committee rejected a bill that would have changed the meaning of one of the four stars on the Arkansas flag to honor the contributions of Native Americans to the state instead of honoring the Confederacy.