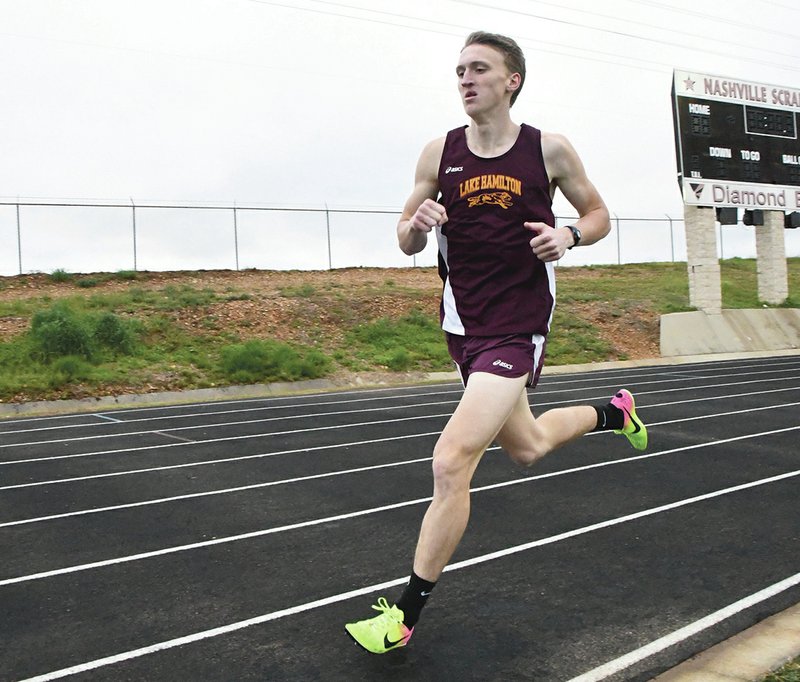 Submitted photo RECORD BREAKER: Lake Hamilton senior Colby Swecker makes his way around the track in the 1600-meter run Thursday at Nashville. Swecker broke the meet record in the event, which was set in 1967.

The senior crossed the line in 4:27.12, breaking the record time of 4:31.1 set by Beebe's Bobby Pruitt in 1967. Pruitt went on to run track at the University of Arkansas, and he later became the track and field coach at Jacksonville, later retiring from the school as a principal.

Wolves coach Karl Koonce was fortunate enough to be witness to both meet records, having raced against Pruitt at the meet in 1967.

"I remember it well," Koonce said Friday. "I was across the track from him in the same race. He was a senior, and I was a sophomore. I hadn't even crossed a 5 minute mile yet, so I had stars in my eyes.

While this was not the best time he had posted, having run a 4:24.15 in last year's Class 6A state track meet, Colby Swecker was inspired by Koonce's story.

"I thought it was amazing," he said of breaking the record. "Coach Koonce told me the story that he was in the same race as the guy who set it 52 years ago."

Koonce said that Swecker had brought the meet program to him before the race and showed him the record.

"He set his eyes on breaking that record," he recalled. "It was hard to believe it stood that long."

"I saw the record, and I knew that I had done it faster," Colby Swecker said. "That motivated me, especially since it's coach Koonce's last year. I was doing it for coach."

Teammate Skylar Davis-Weldon came in two seconds behind the former meet record at 4:33.10, setting a personal record as well as qualifying for this year's Class 5A state meet, which will be held at Lake Hamilton on May 3.

The pair of Wolves were over 25 seconds ahead of the third-place finisher, De Queen's Anthony Sanchez, who clocked the race at 4:59.96.

The Little Rock commit feels confident about being at this point with three weeks to go before the state meet, admitting that he thinks he can set new school records by the end of the season.

Billy Swecker, Adam Albrecht, Houston Baber and Carter Manatt finished 20 seconds ahead of Texarkana's 4x800-meter relay team to win the event (8:45.30). Haze Farmer, who turned in a height of 17 feet, 2 inches last week at the Lakeside Ram Relays, once again won the pole vault with a height of 16 feet, which was still 18 inches above Nashville's Kalob Carpenter in second place.

On the girls' side, overall state champion Edie Murray cleared 11 feet with teammate Mahayla Swayze taking second with a clearance of 10 feet, and Magnolia's Bailey Stultz was third with a vault of seven feet. Murray turned in a vault of 12 feet last week with Swayze at 10 feet.

Jessica Jennings won the 3200-meter run for the girls with a time of 13:06.69 with teammate Meighan Mears crossing the line just over a minute later (14:06.85) for second place.