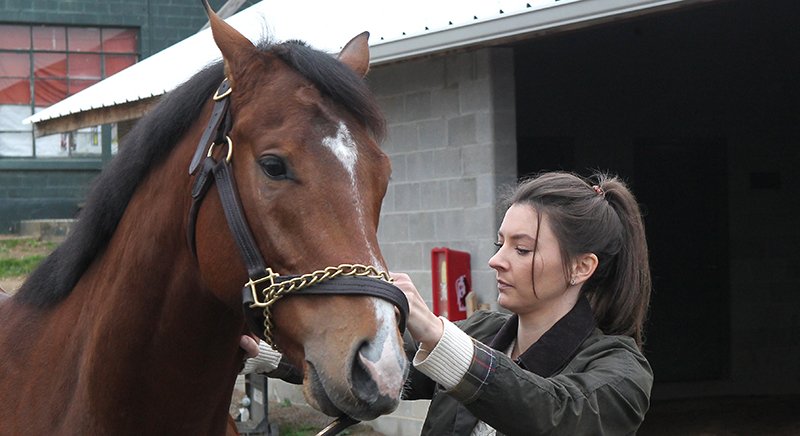 EDITOR'S NOTE: Each year, The Sentinel-Record presents a series of articles highlighting the unique occupations surrounding the sport of thoroughbred racing in Hot Springs and the individuals who make the live meet a success.

Much like humans, thoroughbred athletes often need adjustments through chiropractic care in order to perform their best every day.

Chiropractor Emily Hollingsworth Clem is in her first year working with thoroughbreds at Oaklawn Park, something she has wanted to do since starting her journey in the profession.

"In chiropractic school, I always wanted to do animal chiropractic, but I just couldn't fit it into my schedule because I was doing acupuncture, too," she said. "So, just this past year I was able to go down to Dallas to go to school and start this new journey.

"It's exciting. It's a lot different than working with humans, but it's fun."

Clem said this is her fifth year practicing chiropractic care, and working with the horses at Oaklawn this meet, she is seeing just how different these patients are from her human patients.

"It's different because you can really see (the horses') reaction," she said. "There's no placebo effect with them. They just either feel better or they don't feel better. A lot of times with humans, the brain can get too much into it so you can let that interfere with your healing process. With animals, that's taken out of the equation so you know when they feel better and they definitely show it."

Clem said chiropractic care ensures that all the joints in the body are moving properly, and there is a brain-body connection.

"With chiropractic, it's working with the nervous system and making sure that everything is really functioning properly," she said. "It's really concentrating on the brain-body connection and making sure there's no interference. It can help with muscle balance. It can help with injury prevention because they're performing at their best possible ability. It's just allowing their body to function at its optimal level.

"We don't want any restrictions in the joints because that will interfere with the nervous system being able to supply the body and each organ in the body. It's all about brain-body connection and making sure there's no interference along those pathways."

Clem said adjusting horses is also different from humans because of the techniques used.

"You kind of use gravity to your advantage. It's a little different because with humans, they lie on tables and we can easily move them around, but with horses you kind of have to let them tell you what they want," she said.

"They just respond, not usually faster, but you know when they're feeling better and when they're not. When something's off you can tell by their gait and by their attitude, if they're kind of fussy. You can just kind of tell."

While she grew up around dogs and wanted to work with dogs, it was the horses she worked with while in school that helped develop her interest, even though the thoroughbreds she works with now are much different.

"At school we worked with horses who were in a therapeutic barn so they were all very calm and they were just used to kids riding them all the time," she said. "These are a lot different. They have a lot more personality and are a little more rambunctious."

Clem said she hopes the fans understand the extent of care these horses receive.

"I would say people not viewing the animal as an elite athlete as you would an athlete in any other sport," is a misconception, she said. "They're taken care of -- just like with chiropractic -- you can see all the work and all the people that are back here. They need all the benefits that any human professional athletes need."