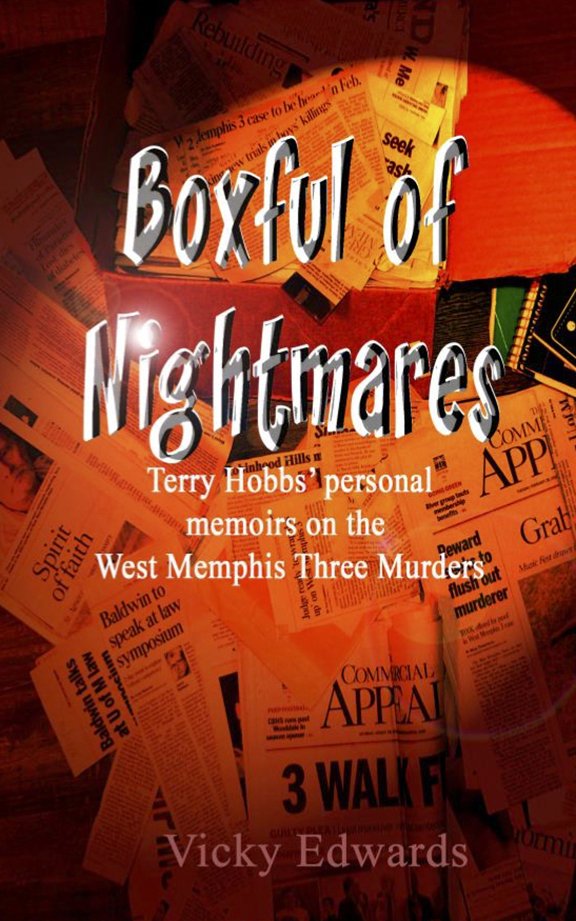 Submitted photos HER COUSIN'S STORY: Local author Linda Edwards has released her debut book, "Boxful of Nightmares," detailing the ordeals and experiences of her cousin, Terry Hobbs, whose stepson was one of the victims in the infamous West Memphis Three murder case in 1993.

The brutal 1993 murders of three young boys in West Memphis and subsequent conviction of three teenagers in their deaths has been the subject of multiple books, documentaries and feature films, but one Hot Springs woman has penned a unique take on the story through the experience of her cousin, stepfather of one of the victims.

Vicky Edwards, a writer and teacher, has announced the release of her first book, "Boxful of Nightmares, Terry Hobbs' Personal Memoirs on the West Memphis Three Murders." Published by TigerEye Publications, the book is based on her interviews with Hobbs and access to his journals chronicling his ordeal as the spotlight was eventually turned on him by "the rich and famous and amateur detectives" trying to implicate him, Edwards said.

On May 6, 1993, three 8-year-old boys, Steve Branch, Michael Moore and Christopher Byers, were found murdered in a muddy creek near Robin Hood Hills in West Memphis after an extensive search following their disappearance the day before.

Three teens, Damien Echols, Jessie Misskelly Jr. and Jason Baldwin, were later arrested and all three tried and convicted the next year. Echols was sentenced to death and Misskelly and Baldwin to life imprisonment, but after new evidence came to light in 2007, the three negotiated a plea agreement with prosecutors leading to their release in 2011.

Hobbs, the stepfather of Steve Branch, became an object of suspicion by some filmmakers and writers following the case, although he has never been charged in their deaths.

Edwards said she was at a family reunion around 2005 and "somebody suggested that I ask Terry if I could write his story. We all knew he had kept journals and wanted to get his version out to the public. When I first asked him, he was skeptical. I don't know if he was worried I wasn't up to the job or if he wasn't really ready, but almost a year to the date later, we had a plan."

She said their families were "fairly close," but she was not that close to Hobbs because she was "quite a bit younger" than him. She said she followed the murders which "hit close to home." She said she didn't personally know Steve Branch, but she remembers asking if Bryan, Hobbs' oldest son, was there when it happened.

"I was told he wasn't simply because it hadn't worked out that weekend. It was bittersweet news," she said.

"Those three little boys were out playing in their neighborhood, much like we played in outside when we were kids. As a result, I had some strict rules on where my children were allowed to play growing up. They had to be in sight of the house at all times, and I'm not the only person who tightened up on the play rules. It wasn't just the loss of innocence of those three Cub Scouts, it was the loss of a way of life throughout our entire state," Edwards said.

Edwards said she worked closely with Hobbs in writing the book, noting she "read and reread his journals multiple times" and visited with him in her home. "We discussed various points and I basically interrogated him to the point I felt badly," she said.

She said Hobbs told her he liked the way the book is laid out and he "is eager for people to see that tragedy doesn't have to continue to define who a person is in their life."

In addition to Hobbs, Edwards said she spoke to and corresponded with "a lot of people" tied to the case, including Hobbs' daughter, Amanda, David Jacoby, the alibi witness for Hobbs, other family members, and one of the witnesses to the "Hobbs Family Secret."

She said she also read numerous legal documents in the case and "was also fortunate enough to dig through the contents of Damien Echols' abandoned storage building."

Edwards stressed that the book is "a story that's about Terry and what he and his family have been through in this case."

She said she addresses Hobbs' "minor encounters with the law" in the book, including a skirmish with his brother-in-law that ended with Hobbs charged with assault.

Asked if his legal problems stemmed from the stress of the situation, Edwards said, "It's difficult to determine exactly which aspects of Terry's life were a direct result of the murders and how much of it was due to poor decisions, but it's clear when reading that his life was not the same afterward."

She said many people, especially the supporters of the West Memphis Three, as Echols, Baldwin and Misskelly have been called, "want to see a smoking gun or a confession in the book. It's not about vindication or clarification.

"Terry's purpose was to share a story of hope. It's a sad story; there are things in that book I wouldn't wish on my worst enemy, but at the end of the day, Terry has found peace in his life and he hopes others in similar situations can take away something positive," she said.

"Boxful of Nightmares," is Edwards' first published book, but she has a fiction work in progress and is also working on a book about the murder of Linda Edwards, a Garland County sheriff's deputy whose body was found Feb. 12, 1977.

"That one is a little more difficult for me, since she was my husband's mother," she said.

Edwards, an adjunct teacher at Henderson State University and National Park College and a certified real estate appraiser, said she and her husband have "lived and worked in Hot Springs for most of the past 29 years," during which she completed her Master of Arts in Creative Writing and Literature and will graduate with a Master of Fine Arts in Creative Writing later this year.

"To me, this book is the culmination of so many dreams. I had three total rewrites to get it to where it is now. It was much harder to write a book than I ever anticipated! Despite all the hard work, there are probably things that were missed or left out, but it's finished now and I'm beyond excited," she said.

Edwards will be hosting a workshop, Writing Memoirs, for Arts in the Park on May 1-2 and she and Hobbs will both be at the Author's Day book signing at Garland County Library from 3:30 to 6:30 p.m. on May 2.