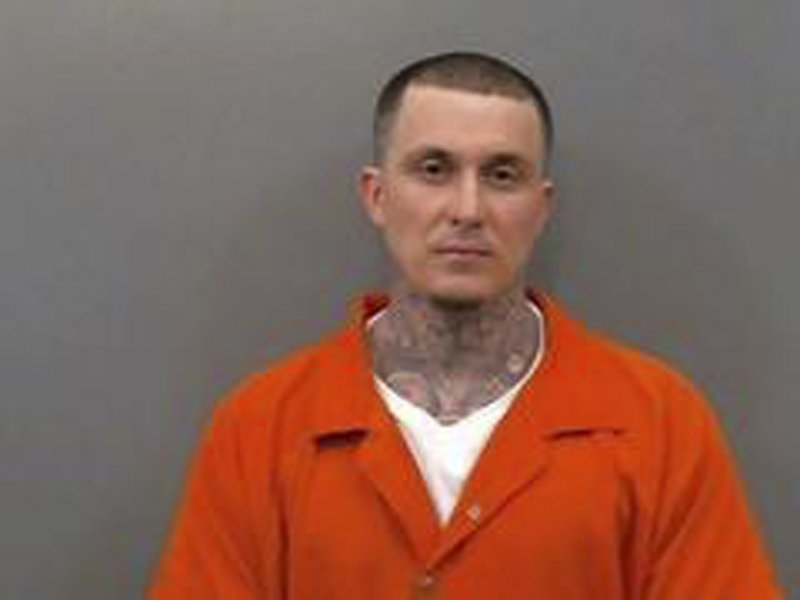 In this undated booking photo provided by the Jefferson County, Ark., Sheriff's Office, Wednesday, July 31, 2019 shows Wesley Gullett. Gullett, a leader of a white supremacist gang in Arkansas and another inmate, Christopher Sanderson, have escaped a local jail and are being sought by authorities who say they consider the men armed and dangerous. The U.S. Marshals service said Tuesday, July 30, 2019 authorities were searching for Gullett and Sanderson after the pair escaped from the Jefferson County Detention Center in Pine Bluff, which is about 38 miles south of Little Rock. (Jefferson County Sheriff's Office via AP)

PINE BLUFF -- Authorities on Thursday captured a white supremacist gang leader who escaped from an Arkansas jail with another inmate and whose disappearance may have gone unnoticed for more than a day.

Wesley Gullett, 30, was captured after he was found walking alone down a highway in Dover, which is about 100 miles northwest of the Jefferson County jail he escaped from, authorities said. He surrendered without incident and was taken to the Pope County jail. The other escaped inmate, Christopher Sanderson, remained at large.

"Through the diligent efforts of our federal, state, and local law enforcement partners, Wesley Gullett has been apprehended," Cody Hiland, U.S attorney for the eastern district of Arkansas, said in a statement. "He will remain in federal custody and ultimately will have his day in court."

Jefferson County Sheriff Lafayette Woods told the Arkansas Democrat-Gazette that the men were last seen at the county jail in Pine Bluff at around 8:30 p.m. Monday. But it wasn't until 4:30 a.m. on Wednesday that officials noticed they were missing, even though Woods told the Pine Bluff Commercial that several other inmates tried to escape Tuesday but were quickly captured after a drone spotted them on the roof.

Maj. Randy Dolphin, the sheriff's office operations commander, told The Associated Press on Thursday that investigators still don't know whether the two were gone all day Tuesday from the roughly 300-inmate jail in Pine Bluff, which is about 40 miles south of Little Rock.

Gullett and Sanderson put padding in their bunks to make it look as if they were asleep, then climbed onto the jail's roof and over a fence to escape, the Democrat-Gazette reported. Jailers doing head counts are supposed to physically confirm that inmates are in their bunks if they don't see movement, but they didn't do so, Woods said.

"I'm going to be honest with you, it comes back down to complacency, comes down to just being lazy and not paying attention to what we're doing. And so at this point, we're handling that internally with our staff," Woods told Little Rock television station KATV.

Gullett is among 54 members of the New Aryan Empire who have been indicted on federal charges and is listed in court documents as the gang's "outside" president who oversaw all gang activities by members who weren't in prison. Prosecutors say the gang has about 5,000 members.

Sanderson, 34, was being held on federal gun and drug charges.

Prosecutors say the New Aryan Empire began as a prison gang in the 1990s but now engages in drug trafficking, witness intimidation and acts of violence, including attempted murder, kidnapping and assault. Indictments were originally returned in 2017 accusing 44 members of the gang with drug and gun crimes, but additional members were named in February for alleged involvement in violent crimes committed by the group.

Gullett is accused of attempting to kill Bruce Wayne Hurley, of Atkins, who told law enforcement about an associate of the gang's drug dealing. Hurley was shot dead at his home in May 2016, but the indictment doesn't say who authorities believe killed him.

A magistrate judge in March rejected Gullett's request for a temporary release to attend his father's funeral after prosecutors argued that he posed a serious danger to the community and was a flight risk.