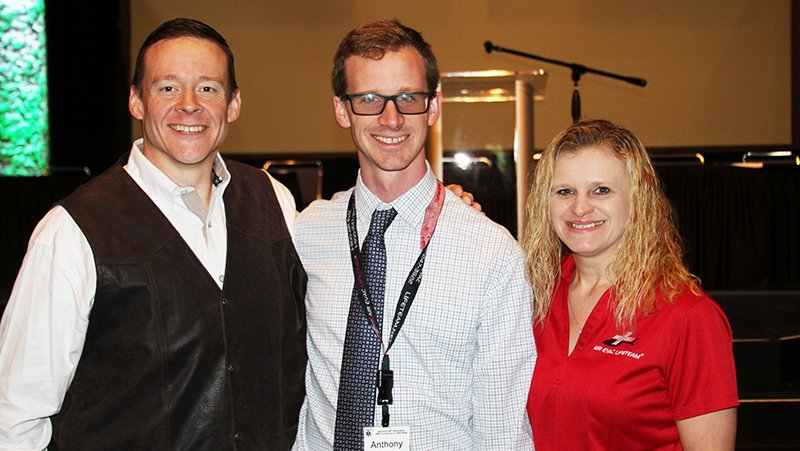 The Sentinel-Record/Tanner Newton MENTAL HEALTH: Anthony Thornton, center, was the keynote speaker at the AEMTA 2019 EMS Symposium & Trade Show. He survived a traumatic injury that left him suffering depression. Kevin Yoder, left, and Carrie Reynolds worked the scene and were also affected by the incident. All three spoke about the importance of getting help if you need it.

Suicide awareness and the mental health of first responders were topics of discussion during the Arkansas EMT Association's 2019 EMS Symposium and Trade Show.

EMTs and paramedics play a large role in the health of society, and in doing so, they experience and witness many traumatic things.

On Friday, Tonia Hale, AEMTA president, said these first responders are often called "superheroes." She said this isn't a good way to describe them, because comparing them to superheroes creates an unattainable image of someone who will always save the day. Rather than call them superheroes, Hale said they are "everyday people who do heroic things."

The keynote speaker for the event was Anthony Thornton who began working in EMS in 2009. Over the years since he has worked as an EMT, paramedic, firefigher and flight paramedic, until he was involved in a head-on collision in 2018.

On May 13, 2018, Thornton was driving after his shift at his job with Arkansas Air Evac Lifeteam had ended, being relieved by Kevin Yoder and Carrie Reynolds. Ten minutes later Reynolds and Yoder would be dispatched to Thornton's crash.

Reynolds said they knew they were coming to a bad situation. She said that the paramedic who was talking to them is "usually very chill" in these situations, but on this incident he was very high strung. Reynolds said from this, she knew whoever they were about to rescue was in bad shape.

"First thing I saw when I opened that door was a flight suit (and I) knew it was one of ours," Reynolds said. Yoder was the one to realize the man was Thornton.

Yoder said the shock of seeing his coworker in that shape paralyzed him, then fear set in. After getting Thornton to a hospital, Yoder said he and Reynolds looked at each other and thought "That's the last time we will see Tony alive."

He would spend three weeks at Cox Medical Center South in Springfield, Mo. before being transferred to Craig Hospital in Denver for three months. He would then spend another three months at Pate Rehab in Dallas.

The mental health of Thornton, Reynolds and Yoder were all affected by the incident.

Before the crash, Thornton was an active man who loved to fish, hike and ride motorcycles. Those hobbies have been taken away from him. He is also unable to do his old job as a paramedic. He said "you go to college, do all of this stuff," and due to someone else's fault, "in a moment it is gone."

Going from being that active man to being a burden on his wife, Thornton said, weighed on him. He said you sit there thinking "the 90-year-old women walking around Walmart are healthier than you."

Thornton also said when suicide is mentioned, someone will always respond by saying suicide is a selfish thing. While laying in bed after the crash, Thornton said he was thinking about how his wife's life would be easier if he died.

What helped Thornton get through this was a strong support system of friends and family.

"I love the life I've got, but I wouldn't be here if I had anything to do about it a year ago," he said.

The trauma of working the scene also affected Yoder and Reynolds. Reynolds said that the best thing she did afterward was the next day she went to a colleague's house and talked through the issue.

"Don't be afraid to talk to someone," Reynolds said. Her husband eventually convinced her to see a counselor, which she said also helped.

Yoder said that sleepless nights would follow that day where he would go back over the call, trying to figure out if he could have done a better job of helping Thornton. His friends and family would also help him through this.

"It was just phenomenal to see the support of friends and colleagues," Yoder said.

When he first started in the industry, Yoder said everybody idolized the "salty, coarse, hard" EMTs who seemingly weren't affected by seeing awful things. He said they now know that these old school people are the ones who end up having the most issues.

"We need to learn to be OK with not being OK. ... We need to realize that as a profession," Yoder said.