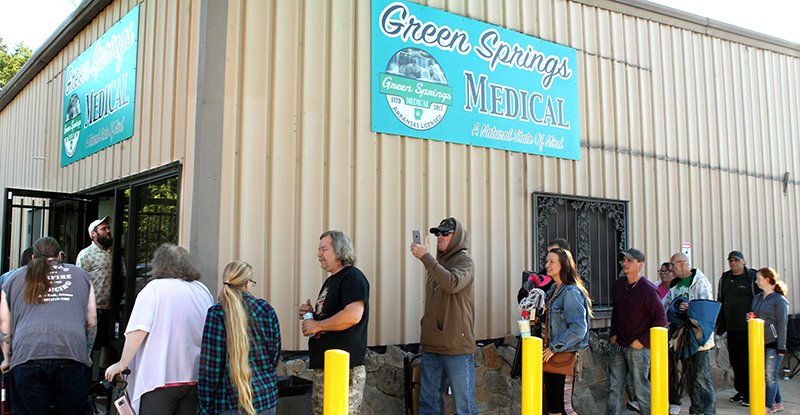 Medical marijuana sales in Arkansas topped $4 million through the end of July, according to sales figures provided by the state revenue agency.

The Arkansas Department of Finance and Administration said the six dispensaries in operation sold 574 pounds totaling $4.01 million. Green Springs Medical, 309 Seneca St., continued to be the most prolific, accounting for 305.15 pounds of the total weight sold since opening May 12. Doctor’s Orders RX, 4897 Malvern Ave., followed, moving 104.25 pounds since making the state’s first legal sale of the drug May 1o.

The two Garland County dispensaries held a monopoly on the state’s newest enterprise for the first six weeks of its existence, accounting for almost all of the $1.72 million in total sales through June 25. Arkansas Natural Products in Clinton expanded medical marijuana to Van Buren County in north central Arkansas June 20.

It ranked fourth in sales through the end of last month, with 48.89 pounds. Native Green Wellness Center in Hensley is third despite opening almost two weeks after the Clinton location. Near the Saline and Pulaski county line, Native Green had sold 64.40 pounds since it opened July 2.

Its 29.99 pounds in sales were the second most during the last two weeks of July, trailing only Green Springs’ 43.61 pounds. Doctor’s Orders RX’s 8.15 pounds in sales over that time ranked fifth behind Arkansas Natural Products’ 12.5 pounds and Fiddler’s Green’s 11.1 pounds

“Both were very well prepared and everything was in place from video surveillance to alarm systems,” said Scott Hardin, DFA’s director of communications. “However, before issuing approval to open we must run a successful test transaction and confirm all information from the purchase is submitted to the state tracking software. As of (Friday morning), this has not taken place at either location.”

“But based on recent feedback, we anticipate several will take place from mid August through September,” he said.

The amendment legalizing marijuana for medicinal purposes voters passed in 2016 authorizes the state Medical Marijuana Commission to issue up to 40 dispensary licenses. Licences were awarded in January, but only six of the 32 dispensaries the commission approved are in operation.

It has asked the attorney general’s office to review possible legal remedies for licensees who aren’t making an effort to serve the more than 14,000 people the state has certified as having a condition qualifying for medical marijuana treatment.