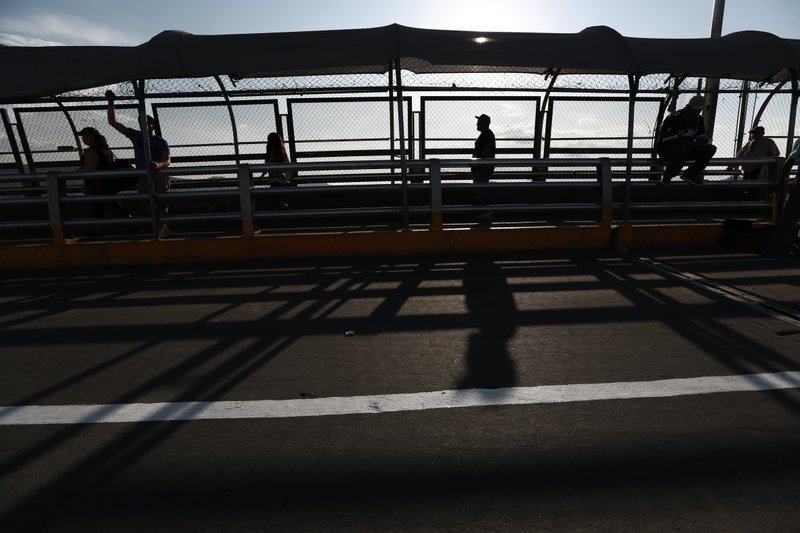 Pedestrians return to Ciudad Juarez, Mexico as they cross the Paso del Norte bridge and leave El Paso, Texas, Tuesday, Aug. 6, 2019. Days after a young Texan went on a shooting rampage that appeared to target Hispanics at a Walmart in El Paso, killing 22 people, including eight Mexican citizens, many like Juarez Mayor Armando Cabada pointed out that the attacker was from north Texas, not from the border community, and somehow that made the pain inflicted less personal. (AP Photo/Christian Chavez)

CIUDAD JUAREZ, Mexico -- Chatting with friends and carrying his lunch cooler, Carlos Carrillo was among hundreds packing the international bridge as they returned to Mexico from their jobs across the border. The construction worker has dual citizenship and a home in El Paso, but since the weekend shooting rampage that killed 22 people in the Texas border city he has been staying with his mother in Juarez.

It means a much longer daily commute, he said, "But right now I don't want to go there." His home in El Paso is near the Walmart where the carnage took place.

But crossing for work is necessary.

"Here it's normal," he said Tuesday of his binational life. "All of us cross every day. We go to work and we come back."

The ties between the two border cities remain strong despite the attack Saturday that appeared to target Hispanics and whose victims included eight Mexican citizens. Mexicans still pack the international bridges going to jobs, stores and schools like always. There's been no talk of boycotting El Paso, a city that depends heavily on Mexican shoppers.

Many like Juarez Mayor Armando Cabada pointed out that the alleged shooter was from north Texas, not from the border community, and somehow that made the pain inflicted less personal.

"They see him like an external agent who looked for a place where the deadly effect of his act could have the greatest repercussions," said Rodolfo Rubio Salas, a professor and researcher at Colegio de Chihuahua.

But even such a horrendous crime will not have a lasting impact on the relationship between the two cities, Rubio said.

Some 15,000 to 20,000 Juarez residents cross to work in El Paso every day and an additional 15,000 students go over the border to study, Rubio said. There are other ties, too: 75% to 80% of Juarez residents have a relative or close friend in El Paso they stay in touch with, a recent survey found.

Some of those who cross to shop and are scared now may stop for a time, Rubio said. "But for those who have to cross every day to work, to study, to visit family, I don't think it is going to have a long-term impact."

One of those with ties on both sides as Elsa Mendoza, the principal of a Juarez elementary school who was among those slain at the Walmart. On Wednesday, she became the first of the Mexican victims whose body was carried home across the bridge.

"She was a very good teacher," said Jose Hernández Polo, who had a 10th grade Spanish class in El Paso with Mendoza in 2014. "She knew a very cultural, literary Spanish" and always tried to help her students.

On Tuesday, wait times for vehicles entering El Paso from Juarez were still around the usual two hours-plus. A steady stream of pedestrians flowed across the Paso del Norte bridge in the morning and a similar flow came in the reverse direction in the afternoon.

Graciela Pérez was among those walking to El Paso to shop as she does once a week. She had tried to go Monday, but the line was so long she put off her trip by a day.

Two weeks earlier, Pérez was at the Walmart where the mass shooting took place shopping for her kids. She admitted being a little worried crossing for the first time since the attack, but added, "We have to go."

At a market of stalls selling used clothing in downtown Juarez, Monica Díaz said she wasn't afraid to cross, but would likely steer clear for now of crowded places like the Walmart shopping center. It's the most popular one for Juarez residents because after crossing the bridge it's a quick five-minute drive along the highway.

Díaz crosses every week to buy used clothing in bulk at a warehouse and then resells the clothes in Juarez.

"We depend on El Paso to survive, for our businesses," she said. "Buy some here, buy some there. It's everyday life."

That was the case for many of the Mexican victims of Saturday's shooting.

One of them, Iván Filiberto Manzano, a father of two young children, went over Saturday morning to shop with a friend, a relative said.

It was "normal like any other day," said the relative, who asked not to be identified by name at the request of the victim's family.

Jésus Rodríguez sells used washing machines, dryers and refrigerators in downtown Juarez. All of the appliances come from the U.S., are refurbished in Juarez and resold in shops like his.

Nearly everyone has family on both sides of the border here, he said.

Rodríguez said he doesn't think the shooting will affect his business, but he lamented the shooter's alleged motivations and criticized negative rhetoric about Mexicans from President Donald Trump, who planned to visit El Paso on Wednesday.

"It was sad because Mexicans don't want to hurt anyone," Rodríguez said of the shooting. "We just want to work."