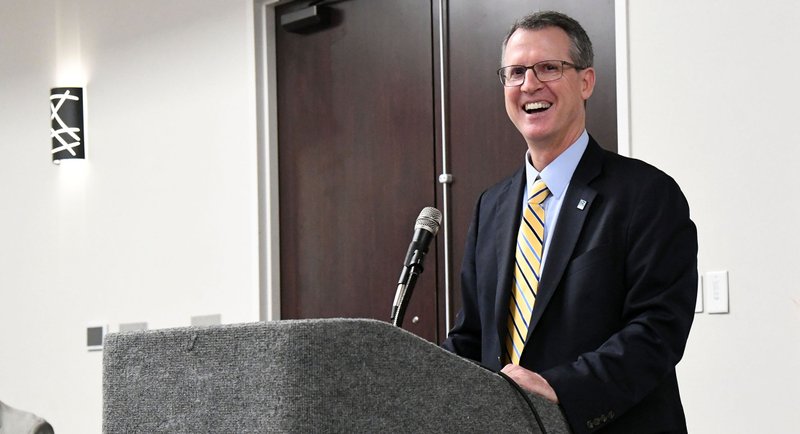 The National Park College Board of Trustees met Wednesday morning for a special called meeting to discuss a single item of action: voting on a resolution to authorize Chairman Forrest Spicer to sign a bond purchase agreement with Crews & Associates Inc. to complete funding of the new student residence hall.

Adoption of the resolution also locked in interest rates and will enable financing to close by Aug. 22. The resolution passed unanimously.

"We had groundbreaking a couple of weeks ago for our new residence hall, Dogwood Hall. There was only one little problem: we didn't have the money to finish that. So today we're entering into a bond purchase agreement to provide funds to finance the residence hall," said Steve Trusty, NPC's vice president for finance and administration.

The aggregate principal amount of the bonds is $9,040,000 and will be secured by student tuition fees and auxiliary revenues, such as earnings from the campus bookstore.

Trusty said that the board had considered and explored securing the funds through a public-private partnership between the school and Servitas LLC. However, in May of this year, it ultimately decided to use Crews & Associates services as bond underwriters to sell bonds as the most cost-effective route, saying it would "be by far the best for the college."

"We put the bond out for bit, and we had several great responses. Crews & Associates came in, and the college has had experience with them before. They've got a great reputation around the state, so we felt good about that. It's been a good experience for us," he said.

According to Trusty, the private-public partnership bond issue would have cost about $9.4 million over 33 years, with total principal interest payments of $21.4 million and a true, or blended, interest rate of over 5.1 percent.

The new bond agreement will cost nearly $13.7 million in total principal interest repayments, span only 30 years and have a blended/true interest rate of 2.95 percent.

The agreement will save the school $7.76 million over 30 years, according to Trusty.

Leigh Ann Biernat, municipal adviser for Stephens Inc., which has been involved with the bond issue process at NPC, said the school will make total year payments of around $467,000.

The first principal payment will be due in 2021 and require semiannual payments every May 1 and Nov. 1, with a final maturity in 2049.

Paul Phillips, senior managing director for Crews & Associates, said "We sold the bonds yesterday morning in the midst of tweets, tariffs, and an emerging currency war. So volatility might be a little bit of an understatement. But as weird as that sounds, it's really good timing. Even since the middle of July, we've seen interest rates drop."

Investors were a "good mix" of retailers and financial institutions, he said.

"We can't help but feel good about it. The interest rate came in at a lower rate that exceeded my expectations. So that just means that we'll get a greater return on our investment. We'll be able to pass those savings along to our students. So we were very fortunate. The timing is very good, and our team worked with us to get that rate. I don't think I could've asked for more," said NPC President John Hogan.