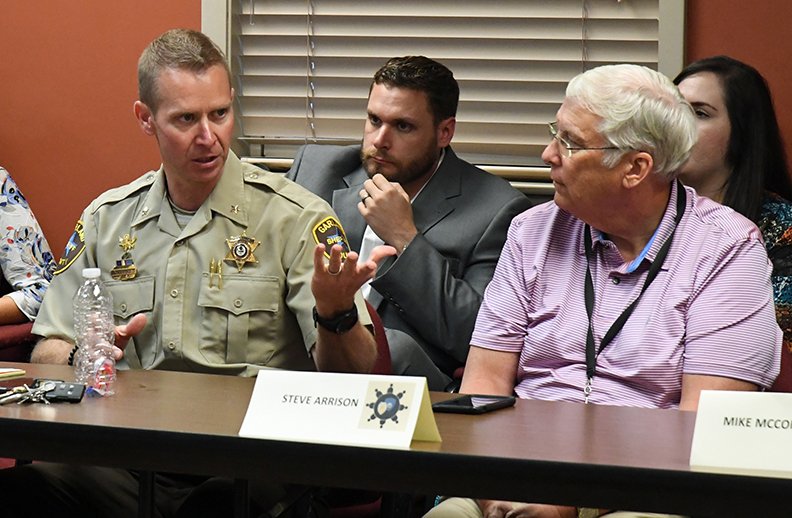 Increased access to mental health services, the need for crisis stabilization centers and improving the ability of law enforcement to deal with mentally ill people were all discussed during a lengthy meeting of public officials and community leaders Wednesday night.

In response to a rash of shooting deaths and violent incidents that have occurred in the city within the last two months, Police Chief Jason Stachey invited local church, school, government, business and law enforcement leaders to a literal roundtable discussion with participants seated around a circle of tables in the HSPD's training room.

"We will always be the first to respond to calls, that's what we do," Assistant Police Chief Walt Everton told the group. "We respond to mental issues, fights, wrecks, homicides, we respond to every kind of call there is."

He gave the example of a homeless man who had been making obscene gestures at motorists prompting people to call the police. While the man was arrested for being disorderly he later bonded out and "is back doing the same thing again. He seems to have some mental issues. It may be he's just down on his luck. No one chooses to be homeless.

"My question to you is, whose problem is it? What can we do?" Everton asked, noting, "We will always respond and try to handle the problem to the best of our ability. There is no playbook for this or a formula to tell us what to do. We kinda have to wing it and spend a lot of time on our knees."

He cited another recent example of a young man "who has some problems" who had been to several churches where the members did their best to minister to him and help him, but his behavior "started scaring some members." So the churches would call the police and he would be banned from that church, but then go to another.

At one point recently, the man went to one church carrying a guitar case and when asked about it, reportedly said it held "an instrument of mass destruction." Everton said, "That's probably not a buzz word you wanna say," and when police responded it was determined he only had a guitar in the case. "But no one knew. What are we supposed to do? What can we do as a community to come together and solve this?"

He said they needed to examine the root causes of violence in the community and develop short term and long term strategies to address those issues. "As far as a short term strategy, we need a crisis stabilization unit in this community. We need an option when we come across people in distress who don't need to be incarcerated and don't necessarily need to be in a hospital because there's not enough hospital beds, either."

He said a "beefed up assisted outpatient commitment law" was needed because "it's very difficult for people who are gravely disabled to get them committed and under the auspices of the court. We need to find ways to require them to be in treatment, have their shots, those kinds of things. We need that and we need to increase access to mental health services."

Gershon said cost is not the issue, but rather "accessibility and effectiveness with services. When you look at health care in this country in the last 20 years, there is a predictable thing. Costs go up but quality goes down. I believe if the quality goes up, the cost will go down. The exact opposite."

He cited a recent study in England where people were hospitalized for longer periods of time "to make sure they really addressed their issues as opposed to these arbitrary decisions that managed care companies make about only a certain number of days you can have. That doesn't work very well. Health care needs to be accessible but it also needs to be more effective and then it will actually become more cost-effective."

He said the community needs to do something about homelessness because "when people are homeless they can't access services and they're more likely to get into trouble. We need to focus more time, energy and resources in terms of prevention. We can't keep basically waiting until the end-stage when people are already having problems because it becomes difficult to address."

Gershon said prevention programs are needed in schools, communities and workplaces and people need to be trained to recognize the early signs of mental illness and substance abuse because the "vast majority" of people suffering from those are not violent offenders. "People who are mentally ill are not more dangerous unless they are not being treated properly. People with substance abuse problems are not necessarily more dangerous unless they're not being treated."

He noted how the United States has the largest number of people incarcerated in the Western world "largely as a result of mental illness and substance abuse issues due to the lack of resources in the community to deal with them in a more cost-effective, compassionate and humane manner. We're like the little Dutch boy and we don't have enough fingers and toes to plug the dike of the safety net for having the healthy society we deserve and need to have."

Gershon stressed "there is no simple solution" and there "are a lot of things we need to do," but active involvement and "a willingness to come together is the best thing we can do. I hope (Wednesday's meeting) is just the beginning of a long process we are willing to go through for a safer community."

Stachey said the HSPD and the Garland County Sheriff's Department have started crisis intervention training for their personnel so when they respond to incidents involving people with mental issues "they will know how to deal with it." But he noted, "I only have limited resources and I cannot keep a police officer staying in that house for nine hours while we're trying to reach a family member or get hold of a hospital to find someone to care for that person."

Under Sheriff Jason Lawrence said the crisis intervention training they use "actually comes from the Memphis model" which started after Memphis police had an officer-involved shooting with someone who was mentally ill. He commended Gov. Asa Hutchinson and the Legislature, which mandated such training for all law enforcement agencies in the state, with a minimum of one officer trained, but a recommendation for 20.

"This is something we've been working on for a long time and Hot Springs and Garland County have led the way," he said, noting they were fortunate to have received grant funding to certify instructors with "close to 20" at the GCSD undergoing the training with six instructors and the HSPD "close to that" as well.

"I was privileged to go and do a ride-along with Memphis police for eight to 10 hours with a certified officer," Lawrence said. "I tell you, they have it down. They have four crisis stabilization centers in the city of Memphis. From that, officers are able to do mental commitments on the street. They don't have to file paperwork or go through a judge or prosecutor."

He said the certified officers are able to make a determination if the person is suicidal or gravely disabled and "can take them to a crisis unit and get them treatment immediately. It was absolutely fascinating. I went on about 20 calls and sometimes the officer didn't make the decision at that point," but he noted they had the ability if needed.

Lawrence stressed that the crisis intervention training is "a small piece of what we need to do" and there were still questions and concerns to be addressed, but "we're leading the way on that."