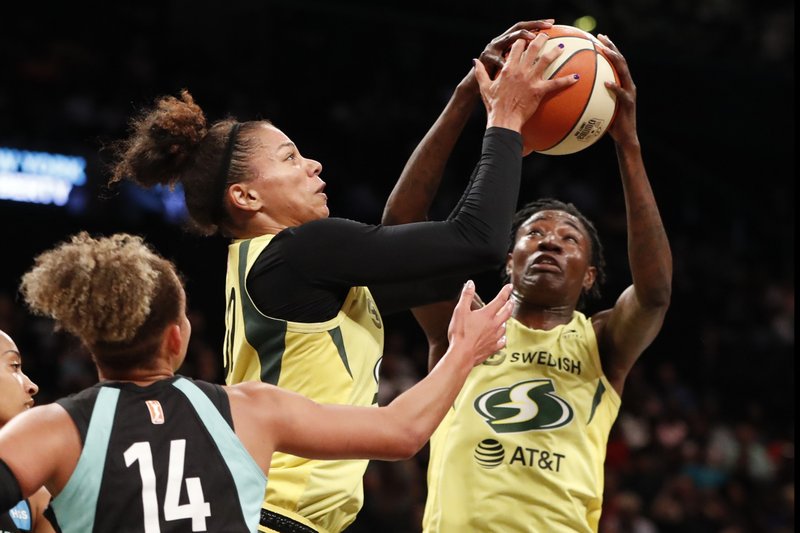 LOS ANGELES -- Chelsea Gray scored seven of her 26 points in the final 1:25 and the Los Angeles Sparks overcame a 16-point deficit to beat the Chicago Sky 84-81 on Sunday.

Nneka Ogwumike had 17 points and 13 rebounds, and Maria Vadeeva added 12 points for the Sparks (15-8). Los Angeles has won five in a row overall and eight straight at home.

Chelsea Gray hit a 3 and, after a basket by Chicago's Cheyenne Parker, made a jumper to cut L.A.'s deficit to 81-80 with a minute left. The Sky committed a shot-clock violation before Gray made two foul shots to make it 82-81 with 29.5 seconds remaining. Allie Quigley missed a 3 on the other end, Gray grabbed the rebound and Ogwumike made a layup to cap the scoring with 5.7 seconds left.

All-Star point guard Courtney Vandersloot did not play for Chicago because of an illness.

The Sky scored 14 of the first 18 points and opened a 20-6 lead when DeShields hit a pull-up jumper late in the first quarter. Los Angeles slowly closed the gap, scored the final three points of the third and Maria Vadeeva converted a 3-point play to open the fourth and give the Sparks their first lead at 62-61.

The Liberty have played a majority of their games in Westchester the past two seasons. The team was bought by a group led by Nets owner Joe Tsai in the offseason.

The team played an exhibition game against China's national team in the preseason at Barclays. The team could potentially play home games at the arena next year. There was a huge crowd with the lower bowl of Barclays Center mostly full.

The fans had a lot to cheer about early on as New York held a 45-43 halftime lead. Then Seattle took over in the third quarter. The Storm (14-11) built a 58-49 advantage midway through the period. New York cut its deficit to five before Seattle scored 10 straight, including five in a row by Clark.

New York couldn't get within eight the rest of the way.

Tina Charles scored 20 of her 22 points in the first half to lead the Liberty (8-15), who have lost five straight and eight of nine. Bria Hartley added 17.

WASHINGTON -- Emma Meesseman scored a season-high 25 points and Elena Delle Donne had 23 points and 10 rebounds in Washington's victory over Minnesota.

Aerial Powers added 20 points and Myisha Hines-Allen had 13 for the Mystics. Washington (17-7) has won three games in a row and eight of its last nine.

Ariel Atkins hit a 3-pointer that gave the Mystics the lead for good and sparked a 14-4 run that made it 25-16.

Washington, which leads the WNBA in scoring (87.3 points per game -- more than five points higher than any other team in the league), scored at least 100 points for the third time this season.

INDIANAPOLIS -- Brittney Griner and five other players were ejected after a fight broke out midway through the fourth quarter of Dallas' win over Phoenix on Saturday night.

With 6:23 left in the final period, Griner and Wings forward Kristine Anigwe got tangled up in the lane and a scuffle ensued. The Mercury's 6-foot-8 center had to be restrained by an official at midcourt where she was still trying to get at Dallas players.

After about a 10-minute review, the officials ejected Griner, Diana Taurasi and Briann January from Phoenix. Taurasi was inactive for the game, but was tossed for leaving the bench area. Anigwe, Kayla Thornton and Kaela Davis were ejected for Dallas.

Phoenix was leading 71-68 at that point.

Arike Ogunbowale scored Dallas' first six points in an 8-2 run that gave the Wings a 79-77 lead when Isabelle Harrison took a steal coast-to-coast for a layup with 26 seconds to play. After an empty possession, the Mercury were forced to foul Ogunbowale, who finished with 23 points. She made the first free throw and missed the second, but chased down her own offensive rebound and the Wings dribbled out the final seconds.

Leilani Mitchell scored 23 points to lead the Mercury (11-12). Griner had 13 points, including her 12th dunk in the regular season, on her bobblehead night.