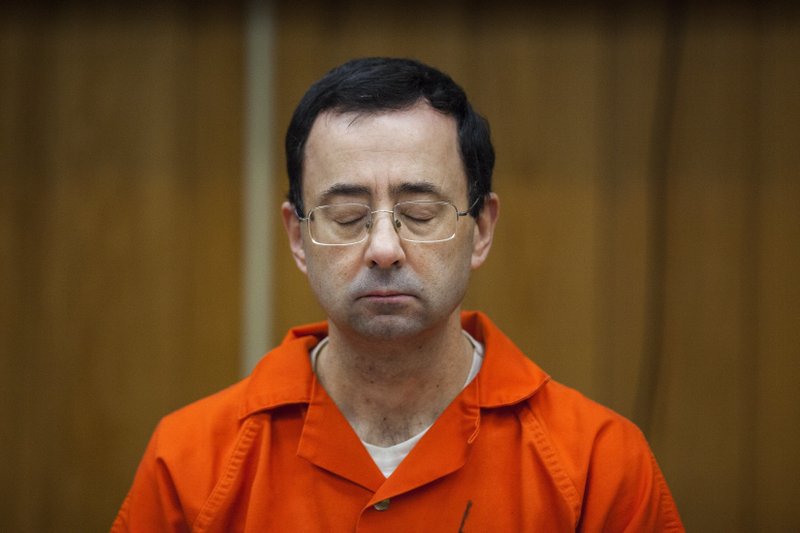 The Associated Press MAKING CHANGES: Larry Nassar listens during his sentencing on Feb. 5, 2018, at Eaton County Circuit Court in Charlotte, Mich. Michigan State University has agreed to improve its processes for investigating sexual misconduct complaints, to institute a new chaperone policy for sensitive medical exams and to take other steps to resolve a federal civil rights investigation related to Nassar's abuse. The agreement was announced Monday by the U.S. Department of Health and Human Services' Office for Civil Rights.

LANSING, Mich. -- Michigan State University has agreed to better protect patients from sexual assaults, including following a chaperone requirement for sensitive medical exams, to resolve a federal civil-rights investigation into Larry Nassar's abuse of young gymnasts and other athletes under the guise of medical treatment.

The three-year agreement announced Monday is the first one struck under a section of the Affordable Care Act that prohibits discrimination in certain health care programs or activities, said Roger Severino, director of the U.S. Department of Health and Human Services' Office for Civil Rights. The deal covers not only students under Title IX but also patients who are not students.

The university and two associated entities -- MSU HealthTeam and MSU Health Care Inc. -- will require that a second health team member be present at sensitive medical exams. The school previously instituted a chaperone requirement in 2017 in the wake of the scandal involving its former sports doctor, Nassar, and his abuse of hundreds of girls and women, but Severino said it now must comply or face consequences.

"It's one thing for an institution that has failed repeatedly to police itself to say that they're going to do better this time compared to the federal government (which has) the ability to strip federal funds in case of repeated noncompliance," Severino said.

He added that federal officials will be monitoring closely, which is a key difference. He said the Office for Civil Rights opened the probe on its own about eight months ago and not in response to a complaint.

When sensitive exams are conducted, patients will be given an appropriate gown, privacy to dress and undress, and sensitive draping to maximize their privacy. The university and the health entities also will revise their nondiscrimination notices and sexual misconduct policies, improve their processes for investigating and resolving complaints, conduct all-staff training and report twice a year to the Health and Human Services' Office for Civil Rights.

University President Samuel Stanley Jr. said the revisions recommended by federal officials "further enhance the many protection and policy improvements MSU has made since Nassar's arrest." He said those include the school's own version of a chaperone policy as well as a protocol to review all reported allegations of inappropriate interactions between practitioners and patients. The university also will add investigators to handle grievances and complaints, he said.

"We must always look for ways to do more for those who trust the university with their health and safety," Stanley said in a statement.

Separate investigations of Michigan State's handling of complaints against Nassar, which the U.S. Department of Education is leading, are expected to end "in the near future," said spokeswoman Liz Hill.

Nassar is effectively serving life in prison for possessing child pornography and molesting young athletes, sometimes when parents were present. He also worked at USA Gymnastics, which trains Olympians and is the sport's governing body.

The announcement about steps the university is taking to resolve the federal civil-rights probe came less than a week after Nassar's former supervisor at Michigan State, ex-College of Osteopathic Medicine Dean William Strampel, was sentenced to up to a year in jail for crimes including neglecting a duty to enforce protocols on Nassar after a female patient complained about sexual contact in 2014. Nassar was fired in 2016 after a former gymnast filed a criminal complaint saying he had sexually assaulted her with his hands while treating her for back pain years earlier.

If an additional person had been in the room with Nassar, some assaults might have been prevented, Severino said. The agency will use audits and interviews to monitor compliance and "make sure that the chaperone policy is not just words," he said.

MSU HealthTeam, the university's medical practice, has around 260 physicians, nurse practitioners and physician assistants working in more than 40 clinics.