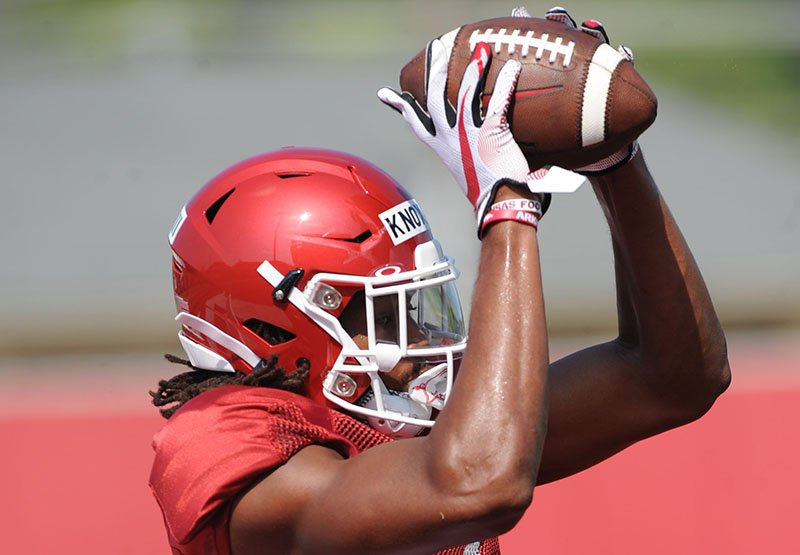 FAYETTEVILLE -- A strong day in the red zone on Monday helped propel the Arkansas Razorbacks' offense to a win in the daily championship belt competition between the units.

The defense has kept a strong hold on the belt since it was introduced for spring drills.

"On red zone we were getting after them today, so the offensive line did a good job today," running back Rakeem Boyd said.

Linebacker Grant Morgan said he felt the defense was on track to win it based on situational work before the offense got rolling.

"Today the offense won ... and it didn't sit well with the defense because that's like our first time to give it up in a while," Morgan said. "Me personally, if we were going off first down, third down, we could've won it. It's just towards the end I guess the red zone kind of helped them out for the other side of the field."

Tight end Chase Harrell, who had a scoring pass in Saturday's scrimmage, added another one during the red zone work.

"We got it in the red zone," Harrell said. "We dominated the red zone and coach [Chad] Morris said that's our belt."

Defensive tackle Isaiah Nichols was back at practice, apparently full go in his white No. 93 jersey.

Tight end Hudson Henry returned to practice but was wearing a green limited participation jersey instead of his red No. 82. Both Henry and Nichols were in concussion protocol last week.

Running back T.J. Hammonds and defensive back Greg Brooks Jr. were new absences on Monday. Hammonds is in concussion protocol. Brooks has been running at No. 1 nickel back, and the reason for his absence from the open periods of practice was not known.

Defensive tackle Nick Fulwider missed another workout, and the 6-7, 260-pound redshirt freshman was seen inside the Walker Pavilion.

With defensive end Eric Gregory out for an extended period with a left ankle injury, the Razorbacks added running back Reid Turner, a 5-10, 185 pounder from Farmington, to the camp roster.

Receiver Daulton Hyatt's hamstring injury is significant enough he has been replaced on the 110-man camp roster by receiver Brett Nabors, a 6-3, 182-pound freshman from Nashville, Tenn.

Morris wanted it hotter after a cool start to camp, and he's getting his wish. The Razorbacks' ninth practice of camp on Monday was conducted on the hottest day of summer in Northwest Arkansas, with the temperature pushing into the low 90s during the morning workout.

"I'm from southeast Texas, so to me it's not that bad," running back Devwah Whaley said. "I'm used to it. Guys out there working, we're getting used to it.

"It's gonna be hot on Saturdays. Some Saturday's are gonna be hotter than that. We've got to use that as our advantage and continue to work through it."

Morris said the amount of his offensive playbook available for usage has been on the rise since the end of the 2018 season.

He suggested the Razorbacks operated with about 30 percent of the schemes during his first year.

"I think we're well ahead of that," Morris said Saturday. Over half our offense is in right now, which you would hope. We challenged our guys this summer in their player-led work to continue to grow. We don't want to come back and continue to teach the base offense. We've still got to teach it, but we want to grow off of it, and we've been able to do that.

"So there are some things we've been able to do. It's a credit to the returning group that's in that room at quarterback. I would say we're somewhere around, if I had to put a percentage on it, 65, 70 percent. I'd say we're well on schedule."

Offensive tackle Dalton Wagner suggested he and fellow offensive linemen Colton Jackson and Ty Clary should be given 1/4 credit for a touchdown by Whaley on Saturday for "basically" carrying Whaley into the end zone.

"Man, I don't really remember too much," Whaley said of the play. "The last thing I remember I just got picked up and thrown into the end zone. It was an inside zone call run and I did all I could do and the big guys helped me out."

The UA athletic department announced on Monday the rollout of a series of "improved elements to the gameday experience," starting with what the department is calling the "HogTown Street Festival" on Saturdays at Reynolds Razorback Stadium.

The "HogTown" area will be on Maple Street, north of the stadium, and it will include a stage with live music, a video board showing the top college games of the day, a beer garden, food trucks and other activities.

The game day events will start four hours prior to each game and conclude 30 minutes before kickoff. Officials will now close off Maple Street from the intersection of Stadium Drive to Razorback Road at 7 p.m. on the Friday before home games.

Morgan said offensive coordinator Joe Craddock challenged some defenders on Monday to see if they could rattle freshman quarterback KJ Jefferson during his time running the offense.

"He wanted us to start talking a lot of crap to KJ to see how he responds, just bring the pressure on him," Morgan said. "He completed like four or five passes in a row. He was out there high-fiving every single person.

"KJ is already leading as a freshman ... He's running the offense when he's out there."

Morgan said he doesn't normally talk to quarterbacks but he made an exception on Monday.

"I walked up to him and said, 'Hey man, that was good right there. You need to keep that up.' So it was good to see him lead."

"That's not good enough," Chavis said. "We put a lot of emphasis on it. We spend a lot of time working on technique. We don't expect turnovers to just happen."

"Chief always gives us that energy. That's the type of energy that we always have on the defensive side of the ball and always play with."

Chavis said he could tell a couple of stories about celebratory sprints at practice.

"The only one I'm gonna tell you is I used to do it a little bit different," Chavis said. "When I first started to get in my profile position I said, 'I haven't done this in a long time, so I better make sure I can do it.' I had to practice on it a little bit.

"I like to get involved with the players and the excitement, and they love it. There's no question about that. When we get a turnover like that and we've got a chance to score, it makes a lot of other guys start buying in to what we're doing."