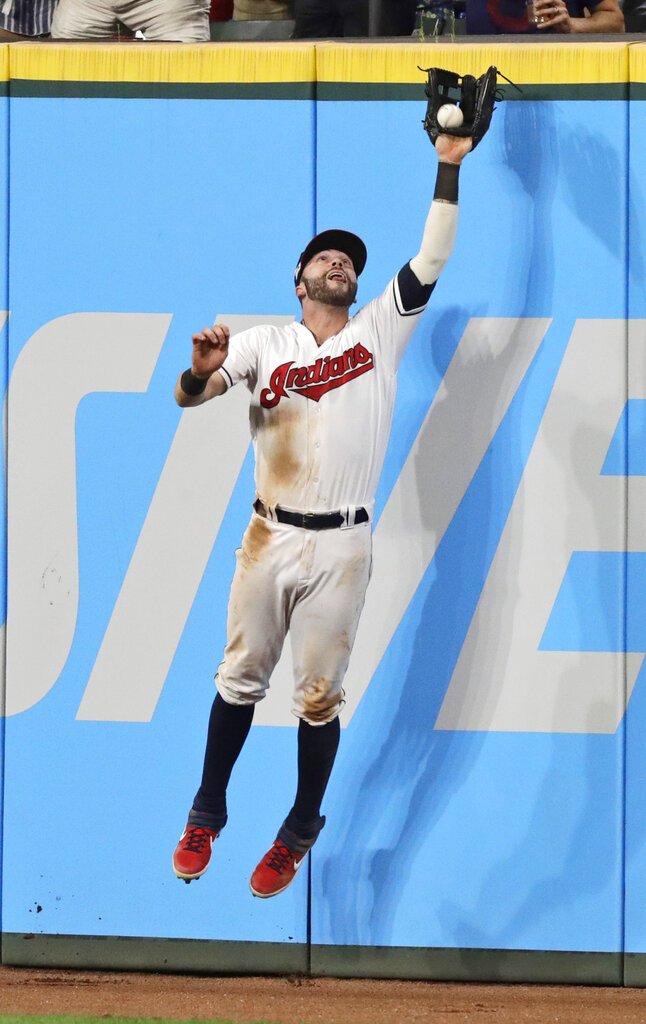 The Associated Press MAKING THE GRAB: Cleveland Indians' Tyler Naquin catches a ball hit by Boston Red Sox's J.D. Martinez on the eighth inning of Monday's game in Cleveland. Martinez was out on the play.

CLEVELAND — Carlos Santana homered leading off the ninth inning to send the Cleveland Indians to a 6-5 win over the fast-fading Boston Red Sox on Monday night and back into first-place in the AL Central.

After the Red Sox tied it in the top of the inning, Santana connected on a 2-2 pitch from Marcus Walden (7-2), driving it barely over the wall in left to give the Indians their biggest win this season.

The Indians moved past the idle Minnesota Twins and are alone in first for the first time since April 19.

José Ramírez hit a three-run homer and Franmil Reyes had a two-run shot as the Indians improved to a MLB-best 43-17 since June 4, when they trailed the Twins by 10 1/2 games.

Down 5-1 after three innings, the Red Sox chipped away and finally tied it in the ninth on a two-out double by Xander Bogaerts off Indians closer Brad Hand (6-3).

But Santana bailed him out and added a new chapter to his own comeback season with Cleveland.

J.D. Martinez and Jackie Bradley Jr. homered, but Boston lost for the 12th time in 15 games. The defending World Series champions came in trailing the New York Yankees by 16 games in the AL East and 7 1/2 back in the wild-card race.

Bo Bichette had the first four-hit game of his career and Randal Grichuk had three hits, including a solo homer, as the Blue Jays won for the 10th time in 15 games.

Drury had five RBI, while Smoak and Grichuk each had four. Danny Jansen had a two-run homer.

Toronto scored eight runs in the fourth, its biggest inning since an eight-run outburst against Seattle on Sept. 20, 2016.

Washington led 7-2 but blew most of that advantage before Sean Doolittle got his 27th save in 32 chances. He entered in the ninth with a 7-4 lead, but the struggling lefty closer’s first pitch of the evening became Phillip Ervin’s pinch-hit homer. The next batter singled, and came around on Joey Votto’s two-out double off the wall in left. Doolittle finally ended things on Josh VanMeter’s foul pop to third baseman Anthony Rendon.

Washington trailed quickly as Jesse Winker drove a sinker from Fedde to left for his 16th homer — and third leading off a game this season.

Fedde (3-2) settled down and ended up going six innings, giving up two runs and six hits.

NEW YORK — Gleyber Torres hit three more home runs, including a pair of three-run drives in the night game that gave him 13 of New York’s record 59 long balls against Baltimore this season, and the Yankees completed a doubleheader sweep.

The Yankees’ winning streak against the Orioles is 14 games.

Gio Urshela had six hits in the twinbill, including a 461-foot homer in the opener.

Torres set a big league record with his fifth multihomer game against a team in a season, breaking a tie with Ralph Kiner (1947), Gus Zernial (1951) and Roy Sievers (1955). His 26 homers are two more than his total as a rookie last year, and the 13 against Baltimore matched Roger Maris in 1961 against Cleveland for the second-most against one team in a season by a Yankees player, one behind Lou Gehrig’s total in 1936 versus Cleveland.

Didi Gregorius hit a three-run homer in the first inning of the day game and had four RBIs. Urshela, Torres and Cameron Maybin added solo shots, all off Gabriel Ynoa (1-7).

Brett Gardner hit a three-run triple off Ty Blach (0-1) in the first inning of the night game and Mike Ford had a solo homer.

It was the Diamondbacks’ 27th comeback win of the season and keeps them in the thick of the wild-card chase.

Merrill Kelly (8-12) allowed four of his six runs in the first inning as he earned his first victory since June 12. Archie Bradley tossed a 1-2-3 ninth for his fourth save.

Trevor Story had two doubles and a solo homer for a Rockies squad that’s gone 13-32 since June 21.

ANAHEIM, Calif. — Mitch Keller earned his first major league victory, Jacob Stallings had a homer and a two-run double, and Pittsburgh snapped its eight-game losing streak with a victory over Los Angeles.

Kevin Newman, Josh Bell and Bryan Reynolds also homered for the Pirates, who won for just the third time in 21 games and only the fifth time since the All-Star break. Pittsburgh jumped to an early 6-0 lead on Jose Suarez (2-4) and the road-weary Angels, who played in Boston on Sunday.

Keller (1-1) came up from the minors to make his fourth big league start and yielded five hits, two walks and just one earned run over five innings, striking out four and pitching out of two late jams.

Max Stassi drove in his first run for the Angels, but Los Angeles opened a seven-game homestand by losing for the ninth time in 11 games.

SAN DIEGO — Avisaíl García had a two-run home run among his three hits and Matt Duffy had four hits and three RBIs for Tampa Bay in its first game in San Diego since 2004.

The Rays won their fourth game in a row overall and their eighth straight on the road.

Joey Lucchesi (7-7) took the loss. He allowed three runs and five hits in 4 2/3 innings, struck out six and walked three.

San Diego backup second baseman Ian Kinsler pitched the ninth, allowing a single, walking two and hitting a batter, but not allowing a run. He was backed by a double play started by rookie shortstop Fernando Tatis Jr. Kinsler hit a two-run homer in the bottom of the ninth.

Austin Pruitt (2-0) held San Diego to one run and five hits in four innings while striking out four and walking none for the win.