The Sentinel-Record/Richard Rasmussen BACK TO CLASS: Students in teacher Kachera Felts’ homeroom class settle in for the first day of the 2019-20 school year at Cutter Morning Star Elementary School Tuesday. - Photo by Richard Rasmussen

The new school year got off to a choppy start in the Cutter Morning Star and Lake Hamilton school districts on Tuesday due to a disruption in internet service and extreme weather that ranged from excessive heat to a sudden downpour.

Glitches aside, representatives of both districts said it was a productive, enjoyable day for students.

"Our entire internet has been out and it's still out. We have had no internet today," said Brian Bridges, Lake Hamilton School District communications coordinator.

While internet service was unavailable, the school's phone system was functional all day, he said.

According to information relayed to Bridges from the Arkansas Department of Education, a severed fiber optic line due to a construction mishap was the most likely cause of the outage. This is not the first time the issue has arisen.

"It's happened before. It happened last year. Anytime that line is cut, those districts that are connected lose service," Bridges said.

The ADE did not have an updated timeline for restoration of internet service at Lake Hamilton, he said.

"You don't realize how much you utilize the internet until you don't have the internet, especially our bookkeepers and in our central office," Bridges said.

Though both schools are on the APSCN grid, Cutter Morning Star's internet access was restored around 1:30 p.m., according to Superintendent Nancy Anderson.

Anderson said that since the school's phone system is internet-based, phones were not functional until that afternoon. While the internet was unavailable, all outside calls were rerouted to a "school cellphone," so communication between the school and parents was still possible, she said.

Despite the unexpected challenges that both schools experienced during the first day of classes, Bridges and Anderson said classes were conducted as usual.

"School has run like normal. We luckily still have the paper and pencils, and copies made and things saved on hard drives and computers," Bridges said. 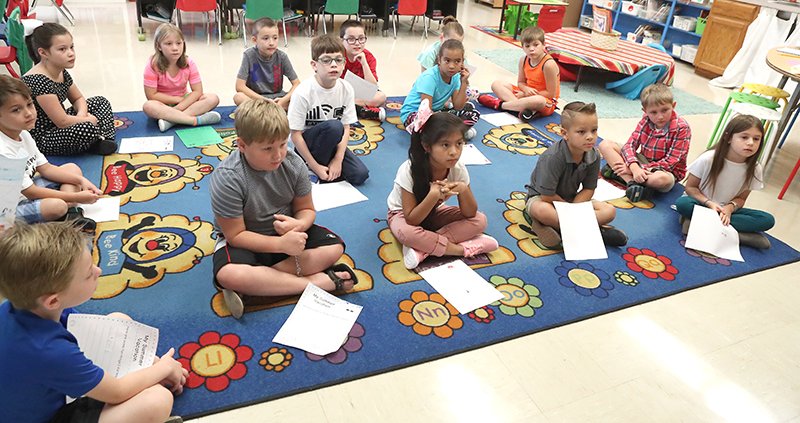 "Day one is always a very logistical day, so teachers are making sure our students in the younger grades are going over protocol and how to act in the cafeteria, and how to line up at recess. Same thing with secondary. Luckily, day one is mostly information that our teachers already had, and it's not something they needed the internet for."

Anderson said teachers adapted by using personal cellphone hot spots to make any necessary schedule changes and to access the internet when needed.

"We just had to adapt to it. It was an interesting day, but we made it just fine," she said.

Both schools also had to be mindful of an excessive heat warning in effect for Garland County from the National Weather Service, and exercise caution during the new state-mandated 40 minute-long recesses for kindergarten through fifth-graders.

The heat warning was in effect until 8 p.m. Tuesday, with a heat index of 107 degrees and 43 percent humidity.

"It was very warm today. However, our kids enjoyed the extra recess. That is for sure," Bridges said.

"One thing today is that we made sure that all the students were well hydrated."

To lower the chances of heat stroke or heat exhaustion, Anderson said teachers were instructed to take small groups of students outside for short increments of time throughout the day.

"We were very cautious about that today because of the heat index," she said.

Cutter Morning Star also had the added challenge of controlling traffic flow around the school with the ongoing construction of the new high school and sports arena.

Anderson said the main challenge of the first day of school was "not so much traffic problems," and that parents and teachers "did a really good job of following traffic patterns."

Following the dismissal of classes, students were brought back inside to wait out the worst of Tuesday afternoon's storm in safety, which put the bus loading and pickup processes "about 30 minutes behind schedule," according to Anderson.

"We've got everyone out safe; it just took us a little bit longer. We had a lot of lightning storms right before we dismissed. But everyone has left now. There was some flooding on Spring Street, so we had to reroute buses. But all students are off-campus now," Anderson said.

Overall, the first day of school was considered an effective instructional day and a successful kickoff of the school year by both schools.

"Kids seem to be happy to back, and teachers seem happy to be back, too," Anderson said.

"It's been a great first day at Lake Hamilton," Bridges said.

"We say it's kind of like an electric day. The kids were just excited to be there, and you could tell they were happy to see their friends and kids their age."