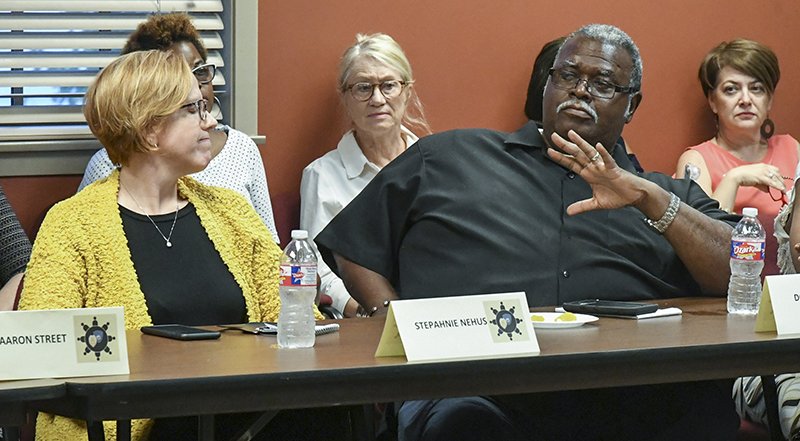 The Sentinel-Record/Grace Brown CHURCH AND SCHOOL: Stephanie Nehus, left, superintendent of the Hot Springs School District, listens last week as the Rev. Donald Crossley, pastor of St. Mark Missionary Baptist Church, talks during a roundtable discussion at the Hot Springs Police Department about the increase in violence in Hot Springs.

The impact of childhood trauma and abuse and the decline of religious influences are all potential factors in the increase in violence nationwide and locally in Hot Springs, speakers said last week during a meeting of community leaders and public officials.

In response to a rash of shooting deaths and violent incidents that have occurred in the city within the last two months, Police Chief Jason Stachey invited local church, school, government, business and law enforcement leaders to a literal roundtable discussion Aug. 7 with participants seated around a circle of tables in the HSPD's training room.

Garland County Under Sheriff Jason Lawrence cited a recent study he read in The Los Angeles Times of active aggressors from 1966 to the present that found many had "some sort of early childhood trauma," including parental suicide, domestic violence, child abuse and bullying.

Of 106 perpetrators studied who had killed four or more people in a public place, the average age was 34, almost all were male and their behavior was found to be "socially contagious," Lawrence said, noting "people see this stuff out there and are socially absorbing it. That's why they are acting out more and more. They study this and they want the next body count, to be the biggest and highest. They seek validation online."

He said the study noted 200 incidents where violence did not occur due to "crisis intervention, de-escalation and suicide prevention. They all helped stop those issues. They were all factors."

Lawrence said since 2017, the Garland County Sheriff's Department has had eight different suicide prevention classes, and three classes in safety since 2016. "So we're very fortunate to have that," he said.

"What you see over and over again is that many of these people who end up being violent had adverse childhood experiences," Dr. Robert Gershon, CEO and executive director of Ouachita Behavioral Health & Wellness, said. "Some had brain injuries at a very young age. Poverty and homelessness all have an impact within a cultural context.

"When these things happen when children are very young, it's extraordinarily difficult for them to overcome and we are basically condemning a lot of these kids. Not only because of the early experiences but because of actual neurological problems that have taken place," he said. "Whatever we can do to make their childhood experience better and minimize trauma is incredibly important and helpful in preventing all these problems we're talking about."

Hot Springs School District Superintendent Stephanie Nehus said, "We have to all come together to overcome what's happening in the home because we only have them those eight hours of the day. School-based mental health is a big piece of what we do. It's a huge issue with our kids."

She said the regulations, rules and changes in pay sources are "really hurting our kids ultimately. The other piece of that is getting to the parents. The regulations are so strict. If you don't get the parents to get (the child) to their appointment to see the psychiatrist you lose that pay source and then they can't be treated and the students miss out again."

Nehus said the district has implemented "Capturing Kids' Hearts," which is focused on relationships. "Building that intrinsic motivation in kids, helping them learn soft skills, helping them learn how to communicate with each other. How to deal with challenges and those types of things. We're going into year two with that and we've seen a big decline in discipline referrals last year across the board as a result of that."

She said another "big piece" is pre-K. "The earlier we can get kids in our school system. Universal pre-K. Garland County is the perfect place to pilot that. Getting kids into school at 3 or 4 years old where we can start changing that piece. We have a lot of low-income students who are not exposed to books and to reading. They get to us at 5 years old and they're already years behind their counterparts in our schools."

Nehus said diversity is another "huge piece" of the puzzle. "We embrace diversity. We love diversity in Hot Springs School District, but I can tell you there are people in this community who don't. It's the adults, not the kids. The kids love each other and they accept each other. But we've got to get to the heart of that and admit there's an issue and we have to be willing to talk about it and work through it. Because it's the adults who have to be the models for the kids so they can be successful in our community."

Stachey said one of the things the HSPD plans for the coming school year is to have its senior resource officers develop curriculum like the DARE (Drug Abuse Resistance Education) they had in the 1980s. "Maybe something similar, but focus on an anti-violence theme. We will ask our SROs to do that at Hot Springs and Lakeside school districts and we'll work with the staff and students to introduce that."

"We've got a lot of problems," the Rev. Donald Crossley, pastor of St. Mark Missionary Baptist Church, said. "We've had a couple of meetings in the black community and we're really concerned about the violence, the recent killings and things. Each time it seems like it's getting closer and closer to home."

He said there were clearly some mental health issues going on, but noted, "There is some spiritual, demonic stuff going on. I think it's a fulfillment of scripture some of the things we're seeing." He noted there was a decline in church activity "not only in Arkansas, but all across the nation. I think some of it has to do with the fast pace we live in."

He said children today are confronted with so many things, such as violent video games, that "really bothers me." He said he sometimes sees children drawing and "getting really good. Art and such. But what I see is they are drawing violent stuff. Guns and other violent (imagery). You've got children trying to raise children. That's a problem in itself."

Crossley said there are things "all of us could do better. The churches, we could do better. We don't spend the time fasting and praying. Something needs to take place. The crime and killing is a big issue."

He said he spoke recently at the funeral for two local sisters killed, noting, "It tears my heart out. It just shouldn't be. I hear all kinds of things on the street. We just need to come together. We've had the police department come in and explain some things to us and those things will need to continue to be done."