The Sentinel-Record/Corbet Deary HISTORY TOUR: Visitors to Powhatan Historic State Park will have the opportunity to tour several old structures, including the Lawrence County Courthouse, which once served as the county seat.

We've recently covered locations in northeastern Arkansas where folks can experience an array of outdoor activities, and can actually experience an overnighter in the midst of the wonderful outdoors.

Although this particular location does not offer camping, it is a great spot where one can get out and kick around for the portion of a day. Powhatan State Park is situated on the banks of the Black River. Of course, this waterway does provide fishing enthusiasts with the opportunity to wet a hook. But this facility is geared more toward sharing a rich and interesting history.

It all began in the early 17th century, as the river town was named after a Native American referred to as Powhatan. The Indian chief was the father of Pocahontas, according to information published by the Arkansas Department of Parks and Tourism, and his three empires covered a majority of eastern Virginia.

The area was occupied by the Osage Indians long before 1853 when the city was incorporated. In fact, the federal government forced them to move beyond the state's borders to reservations in 1817.

So what spurred the incorporation of this little town? Well, it was all a result of river travel. The Laurel was the first recorded steamboat to arrive at Powhatan, coasting to a stop on its banks in 1829. Sternwheelers and keelboats soon followed, bringing with them cargo and passengers. Ferries were also utilized for river crossings.

A fella by the name of John Ficklin is credited as the town's founder. He established a ferry on the Black River in 1837 and built a house on a nearby hill. Eventually referred to as the Powhatan Ferry, this source of crossing the river eventually grew very important, as it was responsible for making Powhatan an essential shipping point for the large territory into the 1880s.

Steamboat passengers boarded at the river town and traveled downstream to the Mississippi. Once reaching this mighty waterway they would travel up or down the river to their final destinations.

Passengers, however, were just a portion of the cargo. These vessels were also responsible for transporting an array of goods, including timber, cotton, game and just about any other product that needed to be shipped along the waterway.

Powhatan thrived for a number of years, as the river served as the main means of travel and cargo transport. But with time comes change. And with change, the town's importance dwindled significantly.

In fact, the town's decline began with the introduction of the Frisco Railroad, or lack thereof. Powhatan quickly grew far less important when the railroad chose to bypass the town. Roads also improved, and river passage fell victim to an ever-growing efficiency and a preference of rail travel.

Powhatan also fell victim to the two world wars and the Great Depression, as well. The town's last ferry made its final voyage in the 1950s and the suspension bridge was closed down in 1951. The school was consolidated in 1956 and, to add salt to the wound, the county seat was moved one decade later.

Although this once-thriving river town was quiet, at best, following this rash of changes, nobody could deny its historical significance. That in mind, the town eventually became one of the 52 Arkansas State Parks.

We recently stopped for a visit at the facility, and the experience proved both enjoyable and educational, as we toured several of the original structures that stood when Powhatan was thriving.

The courthouse is a beautiful brick structure situated atop a hill overlooking the Black River and the remainder of the town. We learned the history of this particular building during our tour of the courthouse. According to information posted in the park's brochure, the original structure was completed in 1873 but burned 12 years later.

Much of the county records survived the fire, however, as a result of a fireproof vault, some of which dated back as far as 1813. Construction of the new two-story structure, built on the original foundation began in May of 1888. Brick which had survived the fire were used during the project, as were new bricks for the facade.

County officials bid farewell to the structure in 1966, as voters had chosen to consolidate two county seats and moved their operation to Walnut Ridge.

The courthouse was eventually restored. In fact, it was placed on the National Register of Historic Places in February 1970 and restoration efforts began in January of the following year. And the project was completed in 1973.

The courthouse became a state park in 1974. Arkansas State Parks has continued restoration and interpretation programs and several exhibits pertaining to Lawrence County's history and the judicial system were completed in the building in 2005. The park visitors center is also located in the courthouse.

I certainly enjoyed our tour of the courthouse. But I was most intrigued after following a sidewalk a short ways down the hill to the original jail. The structure was built from native limestone in 1873. 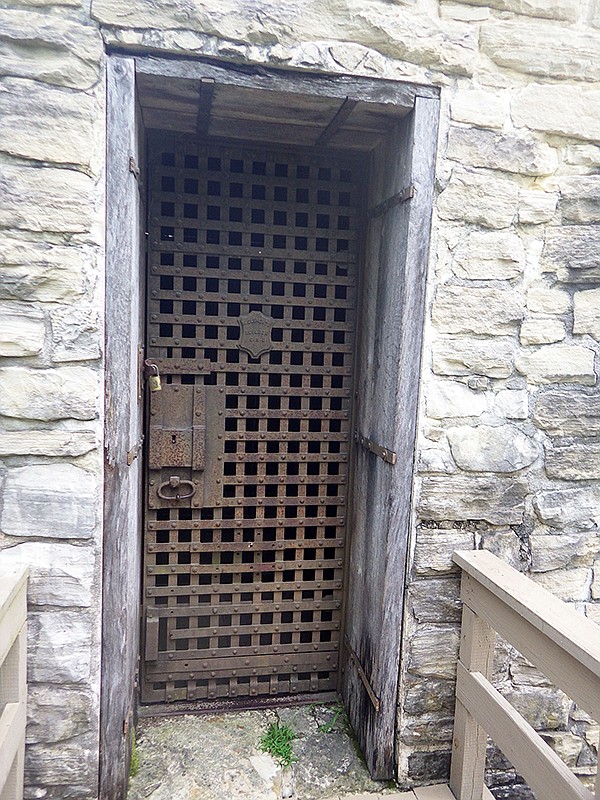 The Sentinel-Record/Corbet Deary OLD JAIL: Powhatan's former jail has served many purposes since it was closed as a result of degradation and security issues.

The jail served its purpose. However, it was abandoned as a result of security issues and degenerated conditions. The structure has since served a number of interesting purposes. It has been utilized as a movie theater, a canning kitchen, a honey processing plant and even an auto garage throughout the years.

The Ficklin House is located within sight of the courthouse. The log cabin is an example of the early architecture in Lawrence County. The 1887 commercial building is constructed of bricks and is situated in the former center of commerce of the town. The building wore several hats back in the day, including a drugstore, post office, attorney's office, wagon factory, and was the building that housed the telephone system.

The Powhatan Male and Female Academy is an "unusual two-room school that was built in 1889." Restored in 2001, the structure still sports some of the original furnishings. The restored classroom is considered as "one of the highlights of the park," as it is utilized to introduce teachers and students to "A School Day of 1900."

Although I usually prefer destinations that focus predominantly on outdoor activities, I certainly enjoy an occasional opportunity to learn of Arkansas' rich history. And after visiting the Powhatan Historic State Park, I can say with all certainty that I enjoyed my visit. In fact, this is a location where I would enjoy revisiting in the future.