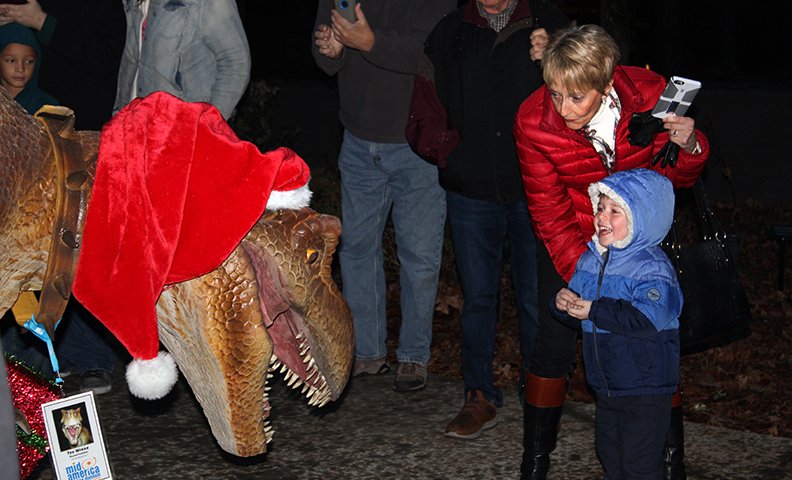 Tee Wrexx greets a child during the opening ceremonies of the second annual Dino-Lites at Mid-America Science Museum Friday night. - Photo by Tanner Newton of The Sentinel-Record

The dinosaurs of Mid-America Science Museum shined on despite rainy skies Friday night for the opening of the second annual Dino-Lites.

Thirteen local nonprofits, organizations and businesses have decorated the dinosaurs located along the Oaklawn Foundation DinoTrek trail outside the museum to create the special holiday light display.

The event was kicked off for a second year by Hot Springs Mayor Pat McCabe, who originally pitched the idea of Dino-Lites to the museum.

With a dinosaur named Tee Wrexx standing nearby, McCabe flipped the switch to light up the trail. After the ceremony, McCabe told The Sentinel-Record that he is happy with how the event has grown since he came up with the idea.

"I think it continues to build on itself," McCabe said, adding that he saw more families at this year's event compared to last year's. He also said that Dino-Lites had a good age mix in the crowd.

Jim Miller, director of marketing at the museum, agreed with McCabe about the increased crowd size. Miller said that even though it was raining, more people turned out for the event.

Also happy with the event was the museum's executive director, Diane LaFollette. "We're thrilled to have community participation," she said. She also noted that last year's Dino-Lites caused an increase in the number of visitors to the museum.

Noreen Killen, chief operations officer of the museum, said that the dinosaurs got so popular last year that this year's participants "stepped up their game."

The groups have dressed up the dinosaurs in all sorts of costumes and covered them in lights. One of the dinosaurs was decorated by The Practice Field. Rich Thompson helped decorate their dinosaur, a stegosaurus. He said that over the past two weeks he and his wife, Ashley Thompson, have made numerous trips to the museum to work on the stegosaurus, which they dressed up like a baseball player.

Ashley Thompson also worked on a different dinosaur for Ouachita Children, Youth and Family Services. They created a shelter for that dinosaur, to show "we always have room for those in need" at the Ouachita center.

Both Thompsons said that decorating the dinosaurs was a fun experience.

Helping with the Ouachita center's dinosaur was Anthony Tidwell. While entering the DinoTrek, Tidwell said that he loves events like this that help out the community.

"Not every day you get the chance to decorate a dinosaur," he added.

Zimmer Electrical Inc. decorated two dinosaurs attacking another dinosaur. Tosha Helms, the company's office manager, said that the company originally installed the lights on the DinoTrek when it opened. She also said that one of their employees, Johnathan Parker, died recently, so the exhibit is in memory of him.

Another team that participated this year was Will's Cinnamon Shop. Katie and William Byrd, and their daughter, Kelli Brezonick, attended Friday's lighting ceremony.

When asked why they participated, Katie Byrd said, "I love dinosaurs and it sounded really fun." William Byrd agreed, saying "It was a really cool idea; we were hoping for the T-Rex," referring to their dinosaur, a Tyrannosaurus Rex. William Byrd said they spend around six hours decorating it.

"I am a big fan of Mid-America," Quinn said. She added that multiple nonprofits being able to help each other like this is a good thing.

Dino-Lites is open every Friday and Saturday from 5-7 p.m. until the end of the year. Visitors get to vote for their favorite dinosaur decoration by putting a plastic gold coin in a tube representing which dinosaur they liked the best. By the end of the opening night, the Zimmer Electrical Inc. dinosaur was winning.

The rest of the museum will also be open during those hours. Miller said that being able to experience the museum at night is also a treat for guests, since it is normally closed at night.

The museum is a "special place at night," Miller said.